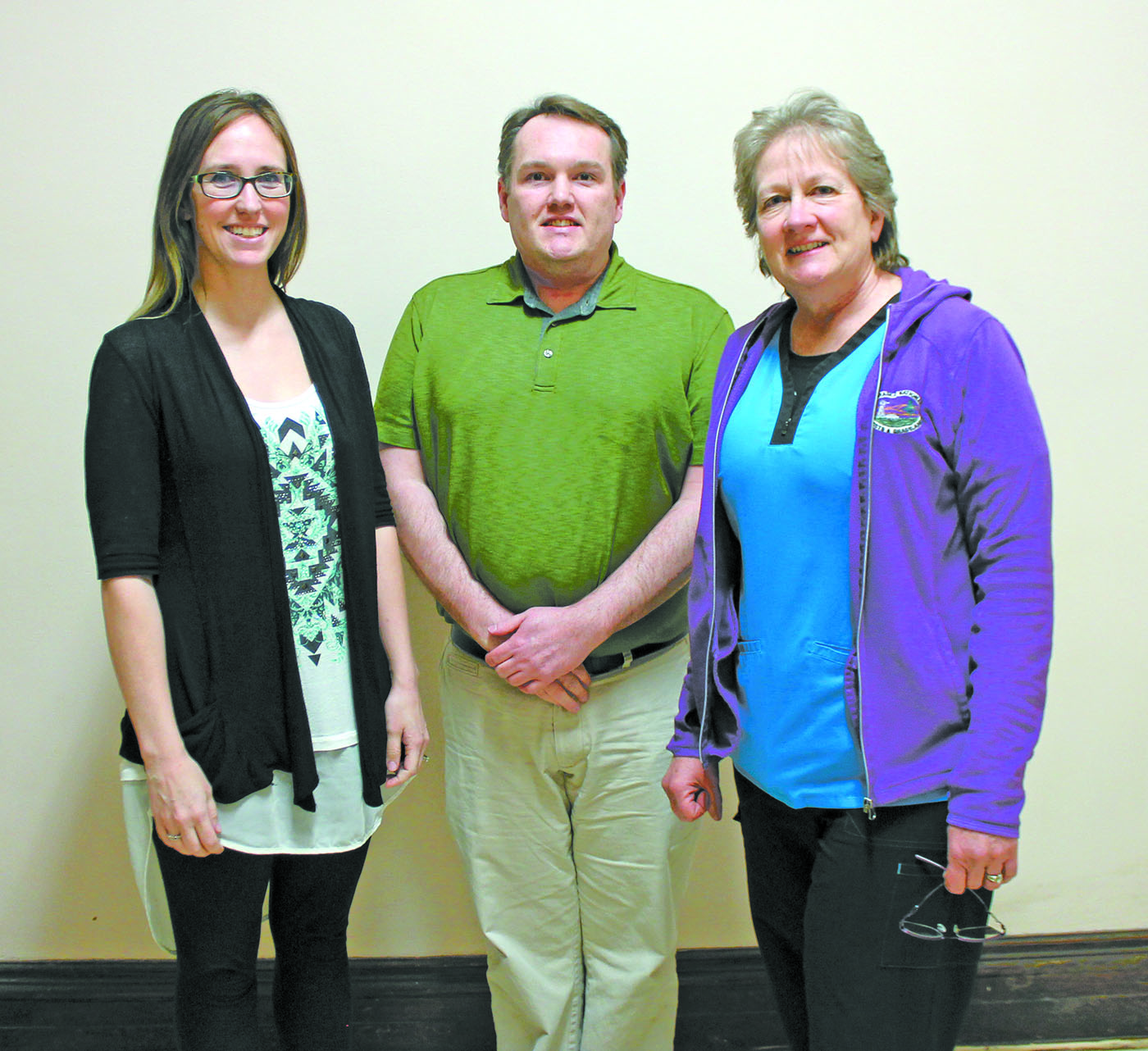 The Department of Veterans Affairs Black Hills Health Care System recently honored their Employee of the Year. He is T. Lane Hayes (shown center) who is the Suicide Prevention Case Manager. Standing beside Hayes are Lisa Batley (left) who received the employee Bravo Award in September and Julie Watts (right) who received the Bravo in June. Another winner of the award last year was Registered Nurse Adam Sanders (not pictured). The Incentive Award Committee selects the Employee of the Month, then the Employee of the Year is chosen from all the employees who received a Bravo Award during the year.

HOT SPRINGS – T. Lane Hayes LPC, NCC, received the Employee of the Year award from the VA Black Hills Health Care System at their annual banquet that honored a select group of employees for their outstanding work providing excellent care and service to veterans.

Hayes is the Suicide Prevention Case Manager at the VA in Hot Springs and has been with the VA Black Hills for eight years. Previously, he was the Residential PTSD therapist.

“I was nominated by my supervisor for assisting a veteran who suffered a stroke,” Hayes said. “He needed extra services upon entering the Domiciliary, so I spent extra time with him and was able to make a connection with him.” Hayes said the veteran “was afraid he wouldn’t be able to graduate on time, but he was able to graduate on time and make the transition to back home.” Hayes said the veteran has continued to be successful since leaving the VA.

“I was honored and surprised to be selected,” Hayes said. “We try to do things beyond our work requirements.”

“I always wanted to work with veterans,” he said. “The opportunity to help veterans and the veterans’ families is really the awesome award we have.”

Also honored at the banquet were Lisa Batley, who is the employee honored with the Bravo Award in September and Julie Watts, who received the Bravo Award in June. Also earning the honor this past year was Registered Nurse Adam Sanders.

Batley of Oral is the advanced medical support in the Speciality Clinic at the VA in Hot Springs.

“I commuted to Ft. Meade to provide additional staffing over the holiday,” she said, explaining why she was chosen for the Bravo Award. “I also helped a patient get testing so he could get surgery sooner. He needed to have a MRI quicker and between both campuses we were able to to get him in for the MRI. We pulled off a miracle.”

“Veterans have done so much for us, it’s nice to give back,” she said. “And, they appreciate anything we do for them.”

Julie Watts, who is a nurse practitioner in Urgent Care, received the Bravo Award in June.

Watts said she is the “go-to person.” “I take care of issues that need to be done,” she said. She started working at the VA in 1999 and went around to the outreach clinics in Winner, Rosebud, Newcastle, Scottsbluff and others. She has been in Urgent Care for a year and a half.

Giving credit to her fellow employees, she said, “It takes almost all the campus,” she said, “What we do is based on what everyone else does.”

In response to Watts’ comments, Hayes said, “Veterans make a long drive to come to the VA here.” Although the veterans could go to a VA closer to where they live, they choose to come to Hot Springs because of the good care and personal recognition, all three employees said. Veterans feel such a sense of healing here in the Black Hills, they all said .

“They (veterans) feel that we are their friends and family,” Hayes said. “We remember their names when we see them in the halls.”

“Some drive four to five hours to get here,” Watts said. “They get better care here.”

Watts said it is good to work with those doing their job. “When the workers are happy, the patients are happy,” she said.

“They (staff) are more than co-workers, they turn into your family,” Hayes said. “The veterans have a sense of well-being and that everyone is welcome.”