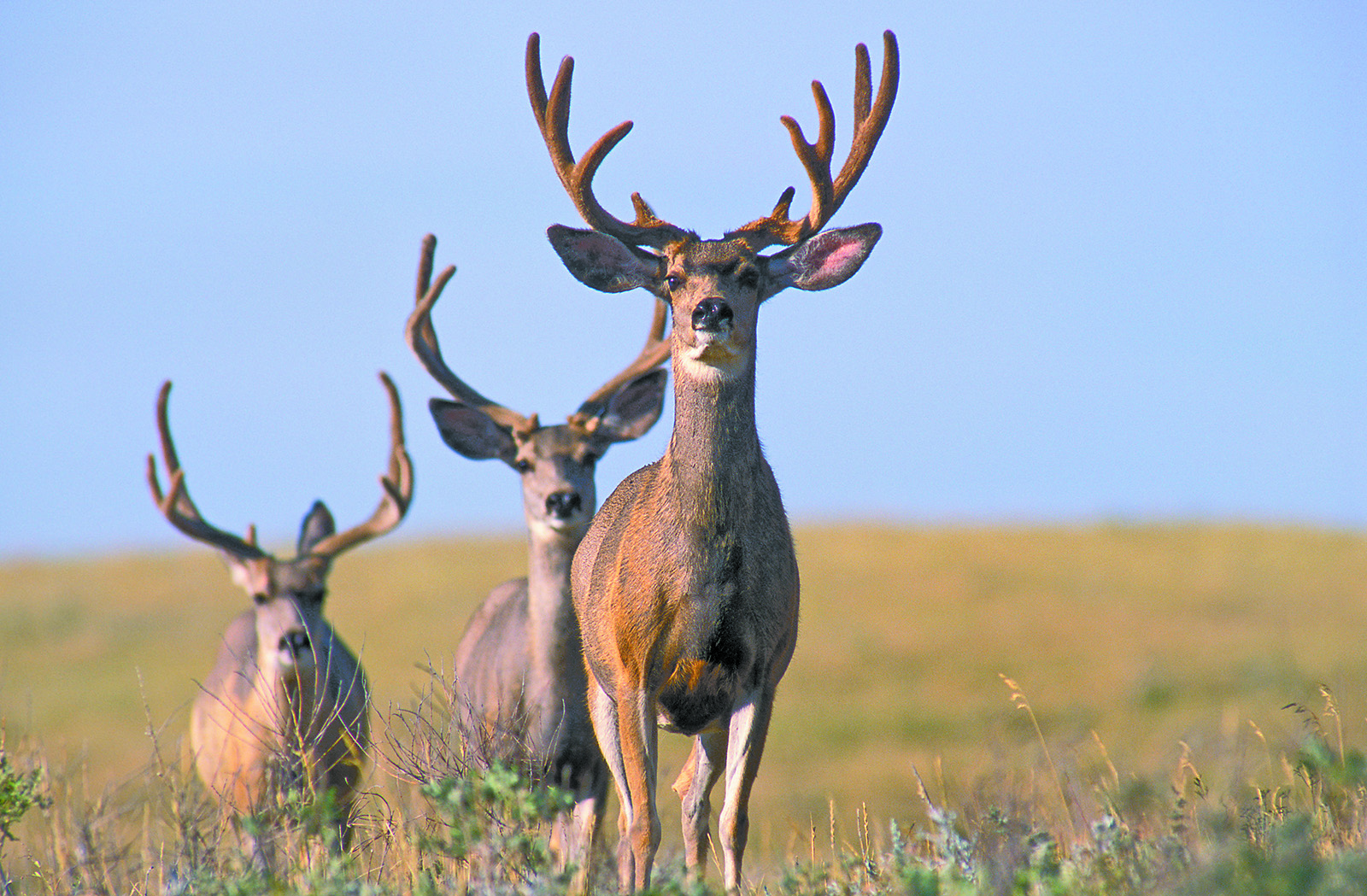 Fall River County was the first location in the state of South Dakota to have confirmed cases of Chronic Wasting Disease (CWD) in both hunter-harvested white-tailed deer (in 2001) and mule deer (in 2002). One of the big concerns of GFP is that they have identified CWD seems more likely to occur in areas where the animals congregate at man-made feed and water stations, which compounds the problem and promotes its spread.

HOT SPRINGS – Local concern over Chronic Wasting Disease (CWD) amongst the area’s deer and elk population is mixed and one that has changed from low to high – and vice versa – over the past 17 1/2 years since South Dakota’s very first documented case of the disease was found in a hunter-harvested white-tailed deer.

That very first deer was found right here in Fall River County in 2001, and one year later, the state’s first-ever documented hunter-harvested mule deer tested positive in the county as well. Since that time, nearby Wind Cave National Park and Custer State Park have also had numerous documented cases of CWD in the captive elk, white tail and mule deer populations.

Recently, and due to growing concern of the disease by the neighboring states of Wyoming and Colorado, the South Dakota Game, Fish and Parks (GFP) has set out to develop the state’s first formal Chronic Wasting Disease Action Plan, which brought them to Hot Springs on March 19 for a public open house on the topic.

The open house in Hot Springs was one of the seven held across the state to educate the public about the disease and to gain their input. Attendance at Hot Springs’ open house was just over 30 people, which was fairly typical for most of the meetings, according to coordinator Chad Switzer of Pierre, who works for GFP as a Wildlife Program Administrator.

Rural Fall River County residents Mark Hollenbeck and Mike Jarding both attended the open house in Hot Springs last month and each have their own different perspectives on the disease. Hollenbeck feels that the concern is “much ado about nothing” and admitted to being more concerned about the disease when he first heard about it being found in the county nearly 18 years ago. Jarding on the other hand is very concerned about it, much more so now than ever before. His concern has changed from low to high due in-part to the aforementioned research that suggests if prevalence of CWD gets to high levels, population may not be able to sustain themselves and hunting of these populations may have to cease in order to maintain desired population levels.

CWD is a fatal brain disease of cervids like deer and elk that is caused by an abnormal protein called a prion. Animals infected with this show progressive symptoms like loss of weight and body condition, behavioral changes, loss of muscle control and eventual death.

According to the GFP, Chronic Wasting Disease is highly contagious and always fatal for the afflicted animal. But unlike other lethal diseases like EHD (Epizootic Hemorrhagic Disease), which has been known in the state to wipe out entire herds of white-tailed deer on a property in a matter of months, CWD can take up to 2 to 4 years for an animal to die from it.

For this reason, deer infected with CWD often show no visible symptoms until the very late stages of the disease. The only way to 100 percent determine if a deer has the CWD is to harvest it and conduct a test of the animal’s nervous or lymphatic system.

The prion that is believed to cause and spread CWD can be found in the ground where an animal feeds is essentially indestructible and can never be eliminated, unlike EHD which is caused by a virus that is spread by a biting midge (insect) and can be killed off by the hard freeze of winter.

Over the past two decades, the GFP says samples have been submitted from hunter harvest, sick surveillance and other mortalities in an effort to monitor the disease. As a result, 13,590 white-tailed deer (125 positives) have been tested, along with 6,122 mule deer (81 positives) and 7,352 elk (194 positives) from across the state, including Wind Cave National Park and Custer State Park.

Statewide, the overall prevalence of CWD appears to be small – just 0.9% amongst the white-tailed deer that were tested. But the GFP officials who conducted the Open House in Hot Springs last month warned that those numbers were not scientifically generated and are not relevant in showing an actual prevalence of the disease in the state.

The GFP’s greatest concern is focusing on the “hot spots” where the disease is known to inhabit, and then do what is possible to help prevent its spread. To gain access to animals for the testing of CWD, Switzer stated at the Hot Springs Open House that the GFP plans to first test deer killed in collisions with vehicles and also work with taxidermists and game processors, as well as facilitate and pay voluntary testing of hunter-harvested animals.

“Even though the Department has not intensively monitored CWD prevalence, it appears CWD is slowly spreading within the Black Hills and on the western prairie,” stated a GFP document made available at their various open houses across the state. “CWD has not been confirmed outside of Custer, Fall River, Lawrence and Pennington counties, though past surveillance efforts were not designed to determine presence/absence across the state.”

The fact that GFP has not implemented mandatory testing of hunter-harvested deer and elk to determine the actual prevalence of CWD in the Black Hills herd is one of the things that has Jarding most concerned about the disease.

Jarding, who is a member of the stakeholders group representing the Big Game Coalition that GFP has put together to help develop their new action plan, said he fears that up to 30 percent of the area’s cervid population is infected. This is a threshold number believed in the Colorado and Wyoming studies that begins to have a negative impact on sustaining populations. But until GFP starts mandating testing of all harvested animals, we’ll never know how high the rates are in the county, he said.

There are a number of things about CWD that should be alarming to people, Jarding said, as he described how the disease is similar to Mad Cow in bovines. He spoke of a medical surgeon friend of his who had first-hand experience with the prions that cause Mad Cow and how, even after their surgical scalpels were sterilized using the usual methods following autopsies of infected animals, the prion was still detected.

“You can’t kill it!” Jarding exclaimed.

While he does not have any first-hand experience with harvesting a postively-tested CWD animal, he has had two neighbors kill elk on his land in Minnekahta Valley that have had CWD. In both cases, neither of the animals exhibited physical symptoms, and wasn’t until they chose to voluntarily have them tested that they new they were positive.

He does not support the idea of completely eradicating populations of deer and elk in areas known to hold the disease, but he is very outspoken about his desire for GFP to require testing, or at least make it easily accessible for anyone hunting in infected areas to have their harvested animals tested.

While there are no known cases of CWD being transferred to humans, the Centers for Disease Control recommends that people not eat animals that are known to have the disease.

As concerned about CWD as Jarding is now, Hollenbeck may be someone that could be considered to be on the opposite end of that spectrum.

While not someone who eats a lot of venison, he does hunt and has also worked as an outfitter, in addition to ranching in Fall River County. Hollenbeck doesn’t find fault in others who eat a lot of venison to be concerned about it, and admitted that he would want to know with certainty if the venison he ate came from a CWD-free animal.

But in terms of it being something the GFP should be investing so much time, energy and resources into, he does not agree.

Hollenbeck’s point was that since it takes so long for the CWD to manifest itself and ultimately kill a deer – he sited upwards of 6 to 8 years – most animals have already reached their normal lifespan and are going to die from something anyway.

Regarding concerns of high prevalence rates of CWD negatively impacting populations, he said he found it interesting the community like Rapid City and Custer – both of which are in the heart of known CWD territory – annually have to perform deer thinning operations to lower populations of deer within their city limits.

One of the things paramount of Jarding’s concerns with the spread of CWD is the artificial feeding of deer and elk by humans. This is also a big concern of GFP who has identified that CWD seems more likely to occur in areas where the animals are crowded or where they congregate at man-made feed and water stations, which compounds the problem.

Jarding sited an example that Switzer was told him when he compared it to giving a kid at school with strep throat a sucker and then letting every other kid around him have a lick.

“Eventually everyone is going to get it,” Jarding said. “Those are the types of things that we can stop now.”