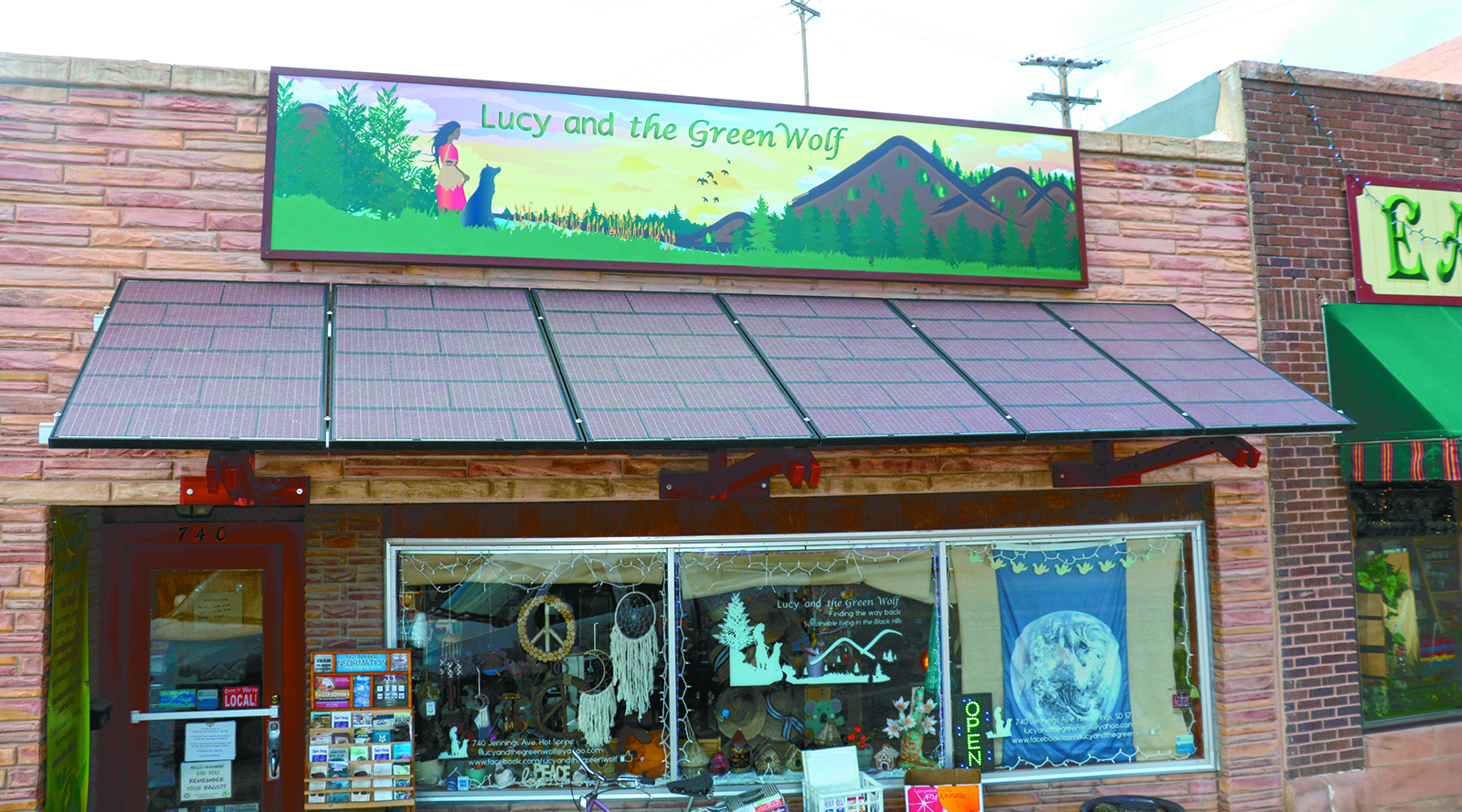 The new awning on the front of Lucy’s and the Green Wolf on Jennings Avenue features six solar panels to help offset the owner’s energy needs. But what makes this set up even more unique are the ‘solarskins’ applied to solar panels to make them look like cedar shingles, which greatly enhances their overall appearance.

HOT SPRINGS –Lucy and The Green Wolf is a locally-owned business whose mission is to support and inspire sustainable living by offering goods that help reduce one’s negative environmental impact.

One of the Hot Springs Area Chamber of Commerce’s recent nominees for Retail Business of the Year, shop owner Lucia Stanslaw offers a wide a variety of hand-made, “upcycled,” recycled and earth-friendly products.

So then, it shouldn’t come to anyone’s surprise when last week Lucy’s became the first business in the Black Hills area to have a custom, solar-powered awning installed on the front of her downtown Jennings Avenue location.

But the process wasn’t easy, and required a number of factors to be met before becoming a reality.

Ryan Usera with GenPro Energy Systems of Piedmont, S.D., said Lucy’s solar awning was the first custom business awning that his company had ever created and installed.

“Lucia’s situation was unique too, due to the historical factors that we needed to accommodate,” Usera said.

Because Lucy and The Green Wolf is located in Hot Springs’ downtown historic district, approval of the solar-panel awning had to first be approved by the historic district commission. And her first attempt for approval was denied.

Stanslaw however said she understood why and recognized that her and GenPro’s presentation was not aesthetically pleasing to the eye. So they went to work to find a better solution.

Enter a company called Sistine Solar, which was created by a pair of MIT (Massachusetts Institute of Technology) students just a few years ago. According to their website, the two students began the company with a goal of making solar power more beautiful and developed a product called “solarskins” that adhere directly onto solar panels.

The skins themselves, Usera said, are similar to a smartphone’s screen protector but applied like vehicle graphics, in that they are first wetted down and then set to dry. He said they can feature any kind of image – from camouflaging graphics to blend into surrounding roofing materials, to photography, to colorful graphics like an American flag, or as in Lucy’s situation, cedar boards to resemble an actual wood-built awning.

Stanslaw said her desire to want to install a solar awning onto her storefront came from her basic desire to just have an awning to help protect her retail display items from the sun’s rays. With a south-facing storefront, she would have to constantly rotate out merchandise in the front of her store to prevent damage, like fading.

When she looked into the pricing of traditional canvas awnings, she said they were very expensive so she began exploring other options. With how she lives her life and how she hopes her business is able to help others live their lives as well, it made sense to explore the possibility of installing a solar panels as an awning.

Comparing costs, she said the solar panel awning was actually more affordable because it came with energy-efficient tax credits that substantially decreased the initial cost of the solar system to about the same, or slightly less.

But as evidenced by the historic district’s initial rejection of her proposal, just having solar panels as an awning wasn’t going to be enough as it would also have to meet their standards as well.

Usera said the solar system installed on Stanslaw’s business is limited by the amount of space for just six solar panels which will generate up to 1.95 kw of electricity. The solarskins mounted onto the panels do however decrease their potential of generating electricity by about 10 percent.

He said the total power generated may not be enough to completely power her store while she is open, but it will significantly supplement her energy use. He and Stanslaw both stated, that unlike some businesses that require a lot more electricity to power equipment like large coolers, Lucy and Green Wolf already has fairly low electrical needs. Stanslaw recently made an effort to lower those needs even more when she had GenPro convert all of her lights to LED as well. GenPro has done that for a number of other locations in Hot Springs as well, including the school district.

Stanslaw and Usera also said that any solar energy her awning generates which she does not use directly will be transferred onto the overall electrical grid, which she will then receive credit for contributing.

Usera said the solarskins adaptation to Lucy and the Green Wolf’s awning was something they were excited to try and are looking forward to being able to offer to others in the area, now that they are trained in how to use them. He said posting photos and information about the project on social media has garnered a bit of a viral response, with people showing interest from as far away as California in a matter of only a couple of days after completion.

Stanslaw said she was also hoping the project would have a positive impact on her business as well, and insight curiosity by pedestrians who walk by and see it, especially tourists.