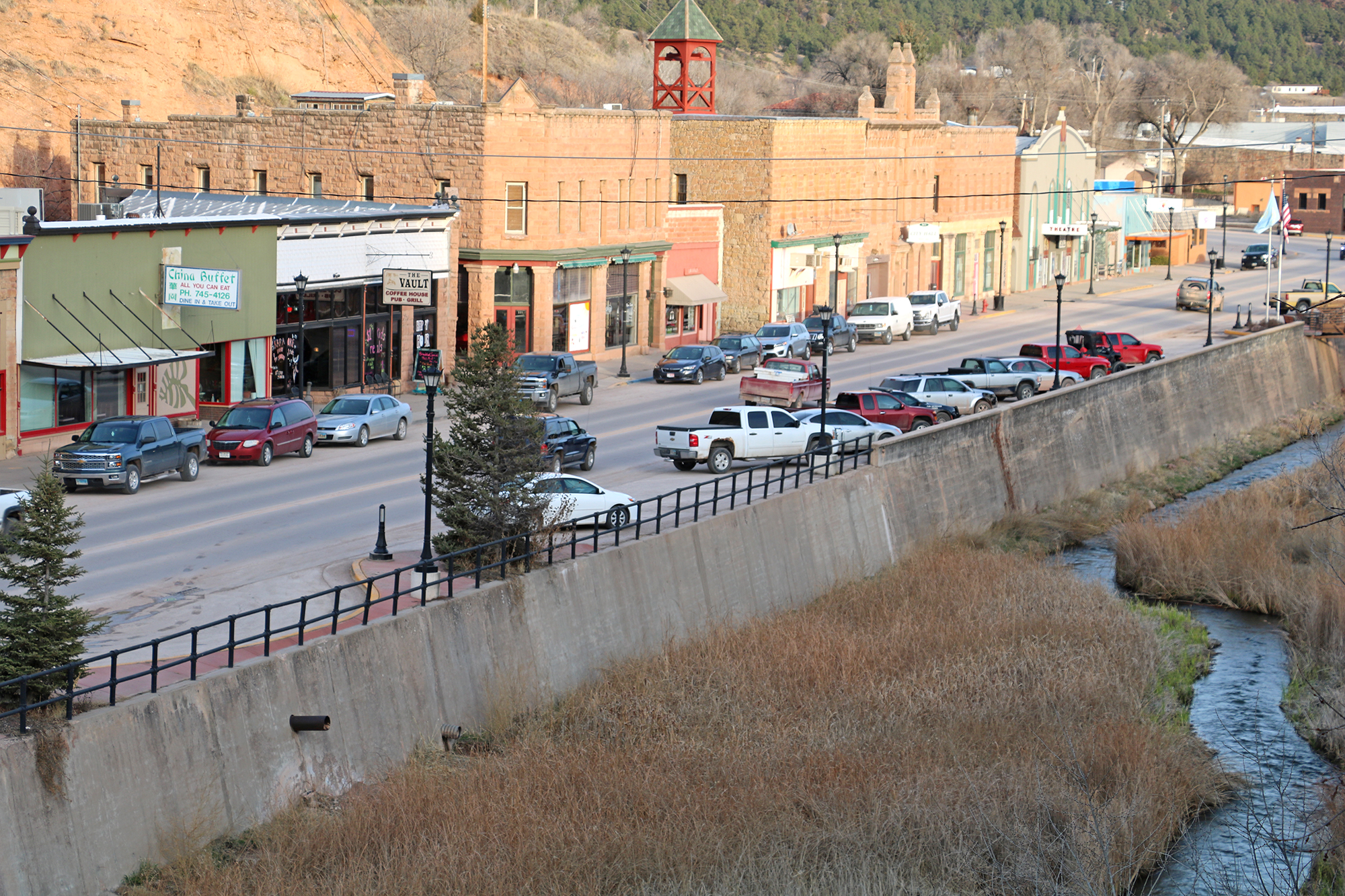 At a meeting last week, hosted by the Chamber of Commerce and the City of Hot Springs, several downtown business owners expressed their support of the proposed plan to construct a suspended walkway along the concrete retaining wall along North River Street.

HOT SPRINGS – Leading a charge to create a downtown that will help revitalize Hot Springs for the next 50 to 75 years – and also come up with a plan to deal with the inconveniences of the construction process – a group of more than two dozen downtown business representatives met in a Retail Roundtable at the Mueller Civic Center last Tuesday night, March 26.

The event was coordinated by the Hot Springs Area Chamber of Commerce along with Hot Springs Mayor George Kotti, who kicked the meeting off with a presentation about the proposed suspension walkway along North River Street. His presentation included some preliminary specs of the walkway that the city has allocated funds to have designed by an engineering firm. The walkway will span a large portion of the road from Minnekahta Avenue to the Jennings Avenue bridge, and take pedestrians on an elevated path above the river along the concrete retaining wall side that runs parallel to the roadway.

Emphasizing the need for the walkway as a safety feature to allow for a wider street in an area of town that has long-since been known as a “choke point” for downtown traffic, Kotti said the State Department of Transportation has been receptive to working with the city and incorporating its design, but so far, is unwilling to help pay for it.

As a state highway, Kotti spoke adamantly about how the City of Hot Springs feels the DOT is required to provide a safe thoroughfare through town and how their currently planned redesign of Hwy. 385 doesn’t meet that standard.

Other important benefits of the suspension walkway, Kotti said, is for tourism and economic development as it would create a gathering spot for visitors and residents that will in turn help the downtown business district.

“This is a once in a lifetime opportunity for the city to define our River Street area to fit our future,” Kotti said.

The estimated cost to construct the suspension walkway is in the neighborhood of $2.5 million, plus as much as $500,000 for engineering fees.

Support for the suspension walkway was overwhelmingly favorable by all of the business representatives in attendance.

K.C. Carruthers, who owns and operates the Morris Grand Gallery, said she supported the concept because it was the only solution on the table that makes any sense, as it addresses safety concerns and also the needs of the downtown businesses.

Other North River Street business owners like Brian Powers with Heartsong Quilts and Greg Gunwall with The Vault also spoke up in favor of the suspension walkway.

Downtown business owners with operations not on North River Street also showed their support of the project, like Diane Gross with Black Hills Books & Treasures and Gary Slagel with Ace Hardware – both located on South Chicago Street.

Slagel said the project was “well worth the $2.5 million,” especially as one that would benefit all of the community for the next 50 to 75 years. He then indicated support of a possible bond that could be used to pay for the project and then be paid off over that same time period.

The Vault’s Gunwall also expressed support of utilizing a bond issue for funding, as did Chicago Street property owner Lindsay Luper with Edward Jones, who indicated her knowledge in that field and how there are a few different options for the city to consider when choosing that route.

Mayor Kotti said he felt a bond issue would be a last resort, only after they’ve exhausted all other possibilities. He remained adamant that the state provide the funding as a safety feature of the state highway, and indicated some possible support for the project by Governor Kristi Noem, with whom he has spoken to about the project.

Hot Springs resident Ed Harvey, who was in attendance representing the American Legion located on Jennings Avenue, supported the mayor’s comments about utilizing a bond as only a last resort.

Harvey also expressed disappointment in that the Fall River County Commissioners had not allocated funds to assist with the project – specifically for the Jennings Avenue Bridge in downtown Hot Springs, which is slated to get replaced soon. He said the route provides important access for the Hot Springs Fire Department to serve city and rural residents, and that the development of roads and bridges within Hot Springs should be a priority to the county, as well as the city.

In addition to a discussion about the suspension walkway itself, a large portion of the roundtable was also devoted to how the community was going to deal with the reconstruction of the highway in a couple of years. Concern was expressed by both the chamber and the mayor on the unavoidable negative impact having the road torn up for several months will have on the adjoining businesses.

Chamber of Commerce Executive Director Olivia Mears said one of the main motivating factors for hosting the Retail Roundtable was to address the construction concerns well in advance, so that when its here, the community has a plan to let visitors and residents know that the downtown is “still open.”

The idea of a trolley to shuttle customers and employees to the downtown drew what appeared to be unanimous support from all those in attendance. Mayor Kotti said the city “missed out by about a half a day” an opportunity to purchase a surplussed trolley from the City of Deadwood, which ended up going to Hill City instead.

Numerous people in attendance said the city should keep looking and get one in place immediately so that it could become established as a mode of transportation well in advance of the highway reconstruction. The Vault’s Gunwall then pulled up on his smartphone a company based in Estes Park, Colo., that offers the leasing of trolleys, and recommended the city try it out for the summer.

Mears brought up concern over the availability of city and chamber funds and resources to operate the trolley, and said the opportunity exists for a private individual or business to take it on.

Justin Stephens, who owns High Mountain Outfitters on North River Street, said a key point the DOT should consider is trying to do the bulk of their construction work during the spring and fall shoulder seasons and avoid, as much as possible, the primary summer/tourism months. Stephens said his, and most all other downtown businesses, earn the vast majority of their revenues on the year in May, June, July and August. Any significant drop in business during that time period could be detrimental to a small business, which was a point loudly supported by many other businesses in attendance, including Mayor Kotti speaking on behalf of the city’s sales tax revenue during that same time period.

At the end of the meeting, a plan was put into place to hold similar meetings to gain business owner input and provide updates at least quarterly, if not more often.