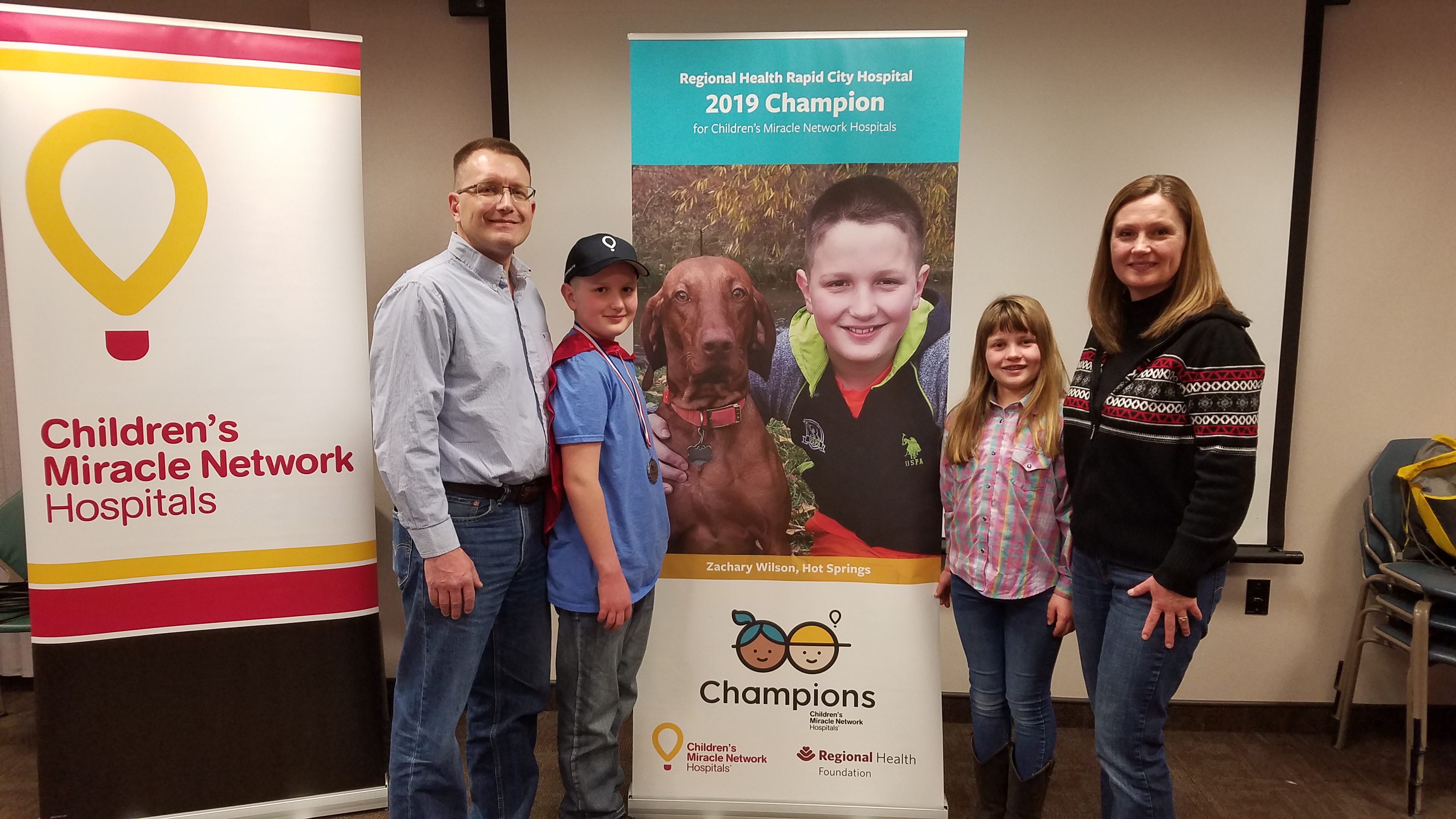 Zachary Wilson was recognized by Children’s Miracle Network (CMN) as a 2019 Champion and will be a spokesperson for them. He stands by a CMN and Regional Health poster with his family. His father Brian stands next to him, and on the right is his sister Reina and his mother Petra.

HOT SPRINGS – Just a little over a year after Zachary Wilson of Hot Springs won his battle against necrotizing pneumonia, he received the Regional Health Rapid City Hospital 2019 Champion for Children’s Miracle Network (CMN) Hospitals award. He will be a spokesperson for CMN and be featured in various campaigns throughout the year to share his story to raise awareness about CMN and Regional Health.

Zachary is the son of Dr. Brian and Petra Wilson of Hot Springs. “We thought we were going to lose him,” Petra said. “He was just hanging on.”

The pneumonia started with a strep infection. “Instead of attacking his throat, the strep attacked his lungs,” Petra  said. “Necrotizing pneumonia eats away at lung tissue.”

The family was in Sioux Falls for a conference when Zachary started feeling poorly and began running a fever. They took him to the hospital’s emergency, where he was tested for strep. They returned to Hot Springs, where his eyes became red and swollen, so they took him to Fall River Health Services emergency. The results from the test taken in Sioux Falls showed that he had strep. He was then transferred by ambulance to the Rapid City Regional Pediatric Intensive Care Unit.

During the two weeks Zachary was in intensive care, equipment provided by CMN kept him alive, Petra said. “He couldn’t eat on his own. He had feeding tubes and a breathing machine.“ CMN also provided diagnostic equipment.

Petra said it opened their eyes to what CMN does. “The equipment is paid for by the funds that are raised,” she said. “They can help a lot of families.”

“One morning Zachary started getting better,” Petra said. “Although he was still weak and had to learn to walk again. It took several days for him to walk and stand on his own.”

He spent almost three weeks in the hospital. “It was so traumatizing,” Petra said. “It’s the worst thing a parent could go through. My whole world was turned upside down.”

Zachary finally was transferred to a regular pediatric unit. Petra remembers that it was on Valentine’s Day when a PICC line was installed in Zachary’s arm.

It has taken several months for Zachary to gain back his strength. “His strength isn’t totally back yet,” Petra said.

Now the experience has taken on a new meaning with Zachary’s award from Children’s Miracle Network. “It’s pretty nice (to get the award),” he said. “They’re (CMN) awesome. They purchase equipment to help sick kids and help save people’s lives.”