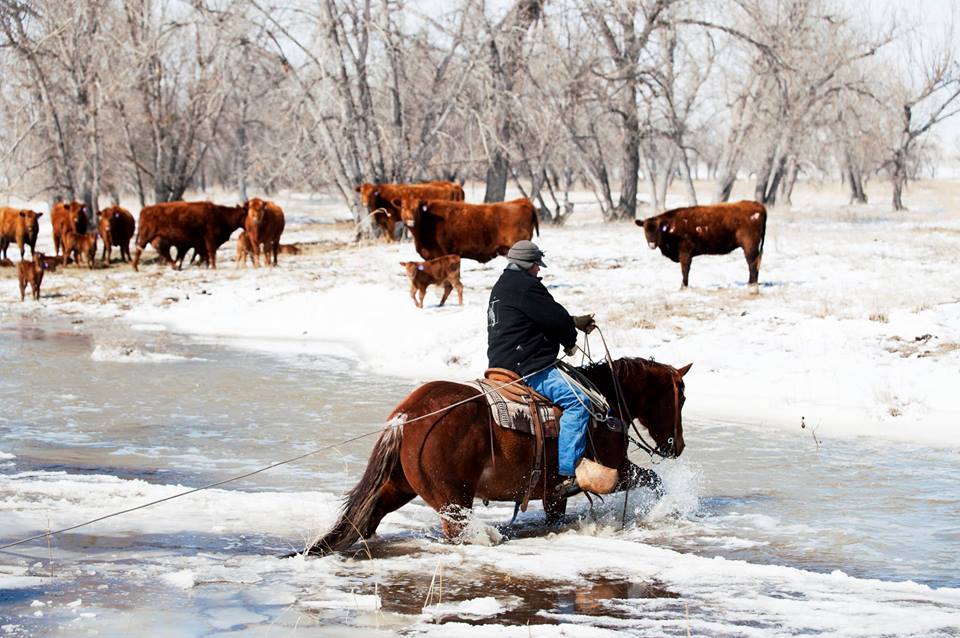 Rising waters in many rivers and streams of the area has made access to livestock a concern for many ranchers, especially now during calving season.

HOT SPRINGS – When the Fall River County Commissioners met on Tuesday, March 19, Commissioner Joe Falkenburg announced that funds are available through the Farm Service Agency (FSA) for any livestock losses or property damage caused by the Winter Storm Ulmer that dumped large amounts of rain and snow on parts of the Plains last week.

The area hardest hit by the storm in Fall River County was on the southern edge along the Nebraska state line, where 12 inches of snow fell, and the eastern side. The Oelrichs area received six inches, Edgemont received about two inches, and the Hot Springs area received less than an inch, according to Fall River Emergency Manager Frank Maynard.

“The snow melt resulting from the storm is still having a huge impact on the Cheyenne River and Hat Creek and other creeks,” Maynard said. Angostura has increased the amount of water discharged through the dam a number of times to prevent flooding.

Scott Thompson, who is County Executive Director of the Farm Service Bureau (FSA ), said that not all losses from the recent storm and the adverse winter conditions have been reported.  “For 2019 livestock losses, eligible livestock owners must file a notice within 30 calendar days of when the loss is first apparent,” he said. Documentation should include the number, kind, type and weight range of the livestock.

The FSA has programs to compensate owners in adverse weather, “it doesn’t have to be a blizzard,” Thompson said. The Livestock Indemnity Program compensates livestock owners and contract growers for livestock death losses in excess of normal mortality due to adverse weather, including floods, blizzards, wildfires, extreme heat or extreme cold, and for disease and attack. There is also compensation for the loss of calves in weather that is minus five degrees or colder. “There is an immediate turnaround of compensation,” Thompson said. “It’s 30 to 60 days.”