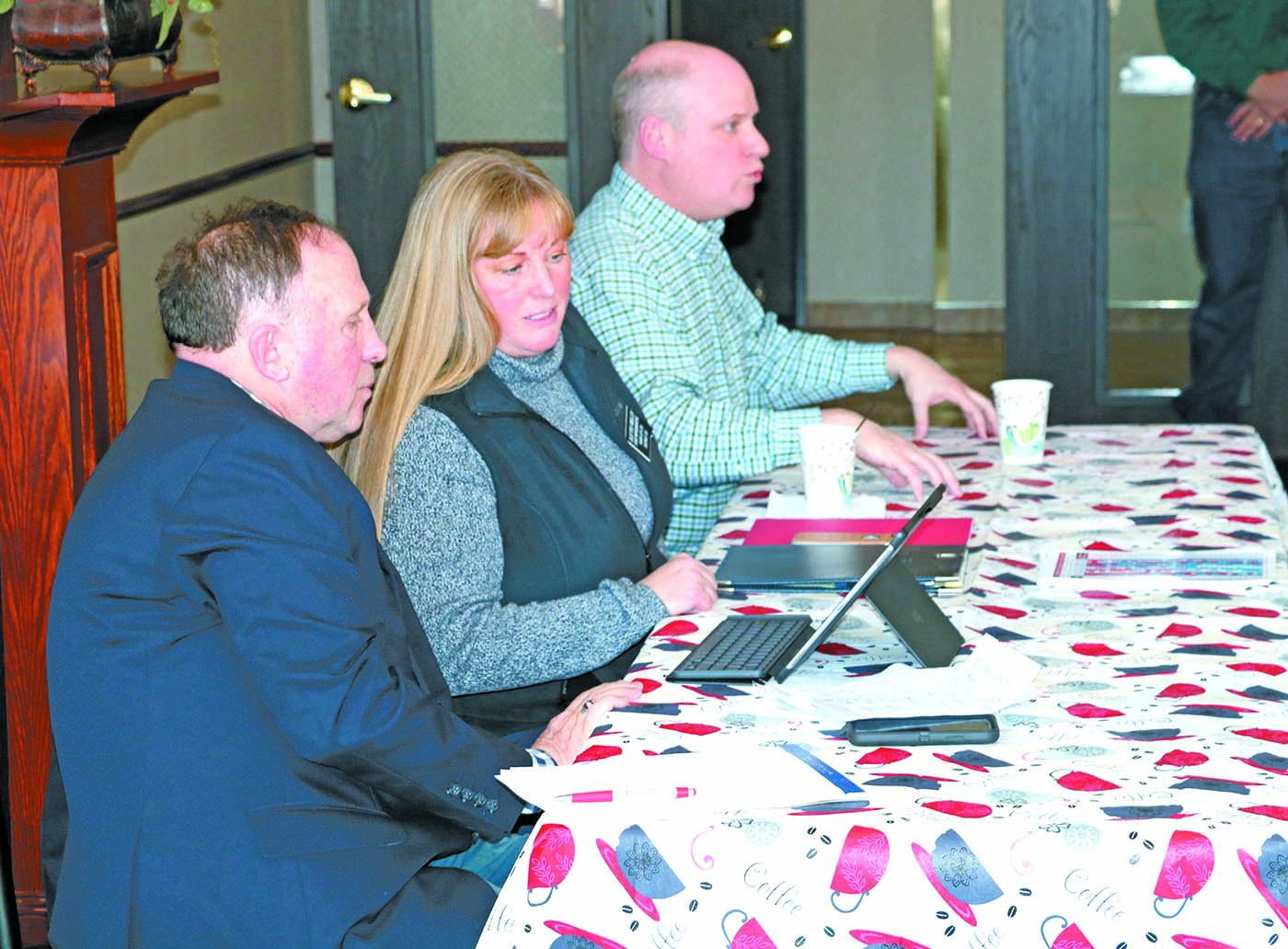 From left, Republican Representatives Tim Goodwin and Julie Frye-Mueller look at data on a laptop as Senator Lance Russell addresses a question posed to him during this past weekend’s Crackerbarrel held at the Stay USA Hotel in Hot Springs. (Brett Nachtigall/Fall River County Herald)

HOT SPRINGS – About 60 people turned out for the Fall River County Herald’s first-ever Legislative Crackerbarrel this past Saturday afternoon, March 9, where all three of the District 30 legislators met with their constituents and discussed a wide range of topics.

The two-hour session at the Stay USA Hotel in Hot Springs, followed by nearly another hour of mingling discussion, began with opening remarks from Senator Lance Russell and Representatives Julie Frye-Mueller and Tim Goodwin where they each brought up bills and issues that they had been involved in during this year’s legislative session.

Audience members includes local District 30 residents, along with elected officials from the City of Hot Springs, City of Edgemont, Fall River County and the Hot Springs School Board.

Sen. Russell urged the local school boards to get aggressive and organized to begin lobbying in Pierre to get the funding formula changed so that it no longer benefits the state’s larger schools like Sioux Falls and Rapid City, who, he said, are getting more money for teachers they don’t need, while small schools like those in Fall River County, are being forced to reduce teachers.

He then brought up how he had warned the local school districts about the new half-cent sales tax that was implemented a couple of years ago to increase teacher pay, and how in the long-run, it was going to end up hurting the local schools. He said that the current funding formula was designed specifically to force consolidation of the state’s smaller schools.

Russell also spoke about the Criminal Justice Reform Bill which has put more pressure on counties and forced county jails to become overcrowded, while bringing up the short-sighted decision by the state to sell the Star Academy near Custer a few years ago.

He also spoke of how Gov. Kristi Noem’s new budget includes nearly 100 new state employees and $75 million in new spending, which he and his fellow District 30 representatives are opposing.

Frye-Mueller said one of the bills she had introduced attempted to extend the amount of time government entities had to make changes to ordinances, to allow the public more time to react and possibly put to a vote of the people if they opposed the action. She said lobbyists representing the counties, cities and chambers of commerce all opposed her bill, which was ultimately defeated in both the House and Senate.

She said she also attempted to introduce a bill that would prevent non-emergency physical exams of students by school personnel, which was opposed by the state’s schools. She then urged all parents and students to not sign the School Handbook due to it giving consent to the school for whatever it says.

Goodwin said how he had been elected as the Majority Whip this year and how that it gives him very close access to Gov. Noem and how open she is to discussing his concerns.

He brought up the “Hemp Bill” which would legalize the growing of hemp in the state and how he supports the bill due to its potential as a cash crop of the state’s ag industry. He said some of the numbers they were presented is that hemp can generate up to $25,000 per acre, which he said is likely a very high estimation. But even if it was $1,000 per acre, he said that would still be far more than what most farmers are getting now for their crops like corn.

Two other recent bills which were passed that he supported involved deterring costly protests to the XL Keystone Pipeline, and another bill that assists wildlife habitat due to its 12:1 return on investment. The bill includes a bounty of predators like raccoons and skunks which target nesting animals like pheasants and ducks.

Goodwin also spoke about his opposition to the Governor’s budget that includes significant growth, which goes against her campaign promises, so he is holding her to that.

Once the session was opened up to questions from the audience, local resident Wes Grimes asked what the panel thought about the state giving away property, and referenced how a building at the State Home in Hot Springs was passed along to the City of Hot Springs who then gave it to the Southern Hills Futures Foundation for the purpose of economic development.

The legislators said they felt state property should always be made available to sell to the public and not given away, and then discussed at length how the STAR Academy near Custer had been sold for a fraction of what they felt it was worth.

Grimes said that all of the nearby residents of the State Home had recently signed a petition to oppose the State giving away land near their residences. Sen. Russell told Grimes that they would be willing to work with him to discuss the matter further with the Secretary of School and Public Lands.

Education was a popular topic throughout the Crackerbarrel as one audience member, who said she represented the 65 percent of people who don’t vote, said she had great concerns that the public school system is properly educating our state’s children.

Goodwin disagreed with her blanket statement and said how his children and those of Sen. Russell’s were publicly educated and are very intelligent and successful.

Frye-Mueller however agreed with the woman’s statement and said that she pulled her children from the public school system and said the “throwing money” at education isn’t the solution and that schools need to change what they are teaching.

Russell said the woman was “more right than wrong” and spoke of the bureaucracy that is still in Pierre that implemented Common Core about 15 years ago, which is the start of when the state’s high test scores started to drop. He said South Dakota was at the top of the list in education “when we were kids” but is now “mediocre” due to the change that took place when the state became the “guinea pig” for Common Core and began changing how they teach to match that of what was going on in states like California and New York.

Other topics brought up by members of the audience included bills pertaining to abortion, dealing with a corporate-driven government, making items like milk available to sell at Farmer’s Markets, and how the state can help counties and municipalities with law enforcement.