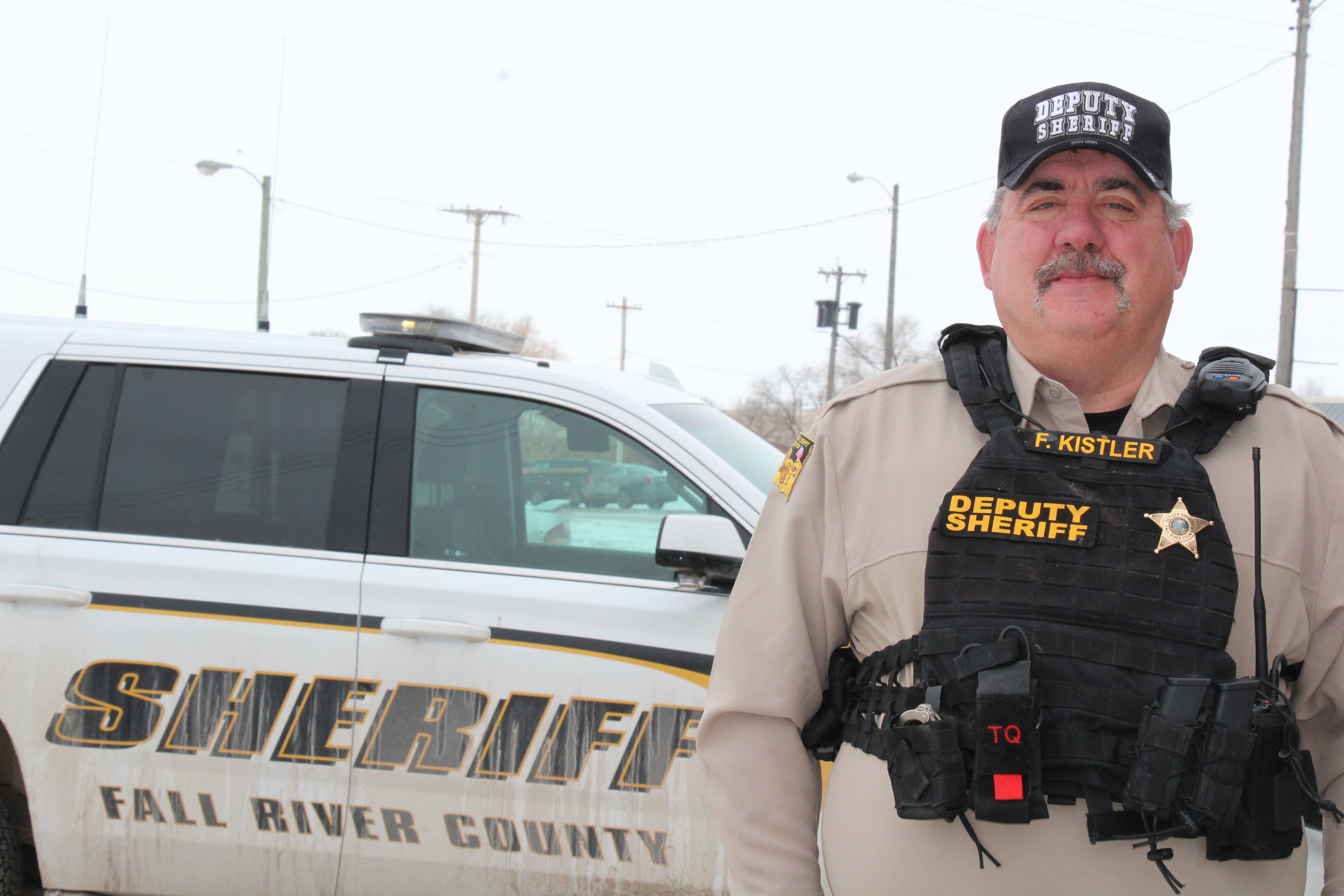 Deputy Frank Kistler, who lives in Edgemont, is the latest officer with the Fall River County Sheriff’s Department to be assigned to the City of Edgemont. (Photo by Rhea Falig/Fall River County Herald)

EDGEMONT – There’s a new sheriff in town ... Deputy Sheriff that is.

Frank Kistler, who has spent the last 28 years of his life serving and protecting, moved to Edgemont in June of 2017 and started working for the Fall River County Sheriff’s Office in June of 2018.

The City of Edgemont does not have its own city police force so contracts with Fall River County for law enforcment services.

He said his hopes for being a presence in Edgemont, “Is just to be here for the people. I’m very easy to talk to. I love talking to people. I’m not real big on bragging about myself but I care about people’s problems and I wanna help them if I can. And it doesn’t matter what their background is. I try to always be polite and respectful to whoever I talk to.”

Officer Kistler has served in various communities over the span of almost three decades— including Charles Mix County in South Dakota, Custer County, Eagle Butte, as well as Albuquerque and Oklahoma.

He started his career in 1991 as a reserve deputy in Custer County and said that from the time he was a kid he wanted to be either a cowboy or police officer stating, “I actually lived both those lives.”

He was awarded Officer of the Year twice in Custer County, but added, “This job isn’t about awards. I like the recognition but the gratitude of the people is the best award I could ever get.”

The 58-year-old deputy sheriff is eligible for retirement but says, “I like the job. I like the community. I don’t plan on retiring anytime soon.”

As far as living in Edgemont he said, “You always have those who won’t have anything to do with you but for the most part people have been great. I try to visit with everybody and let them now I’m here. Let them know I care about their problems. Unfortunately I can’t be here 24/7 because I do have a whole county I have to help with. Edgemont is a very relaxed community. The people are great. I train a lot of young officers and tell them we’re not here to arrest and harass, we’re here to protect and serve. To me that’s what this job is about. We listen to the people. We talk to them and answer their questions as best we can. Serving is talking.”

In regards to crime in Edgemont, Officer Kistler says, “We’ve had a few things, some fights, theft, domestics but for the most part the crime rate in Edgemont is very minimal.”

One of his goals here is to educate people.

“Just because it’s the way it’s always been doesn’t mean it’s legal. A lot of people think cops come out and arrest and write tickets. My job I feel is more education. I wanna educate the people. Just because you use to do it that way doesn’t mean it’s right. It’s not about the tickets to me. It’s about educating. If I can get people educated and compliant I’ve done my job,” he said.