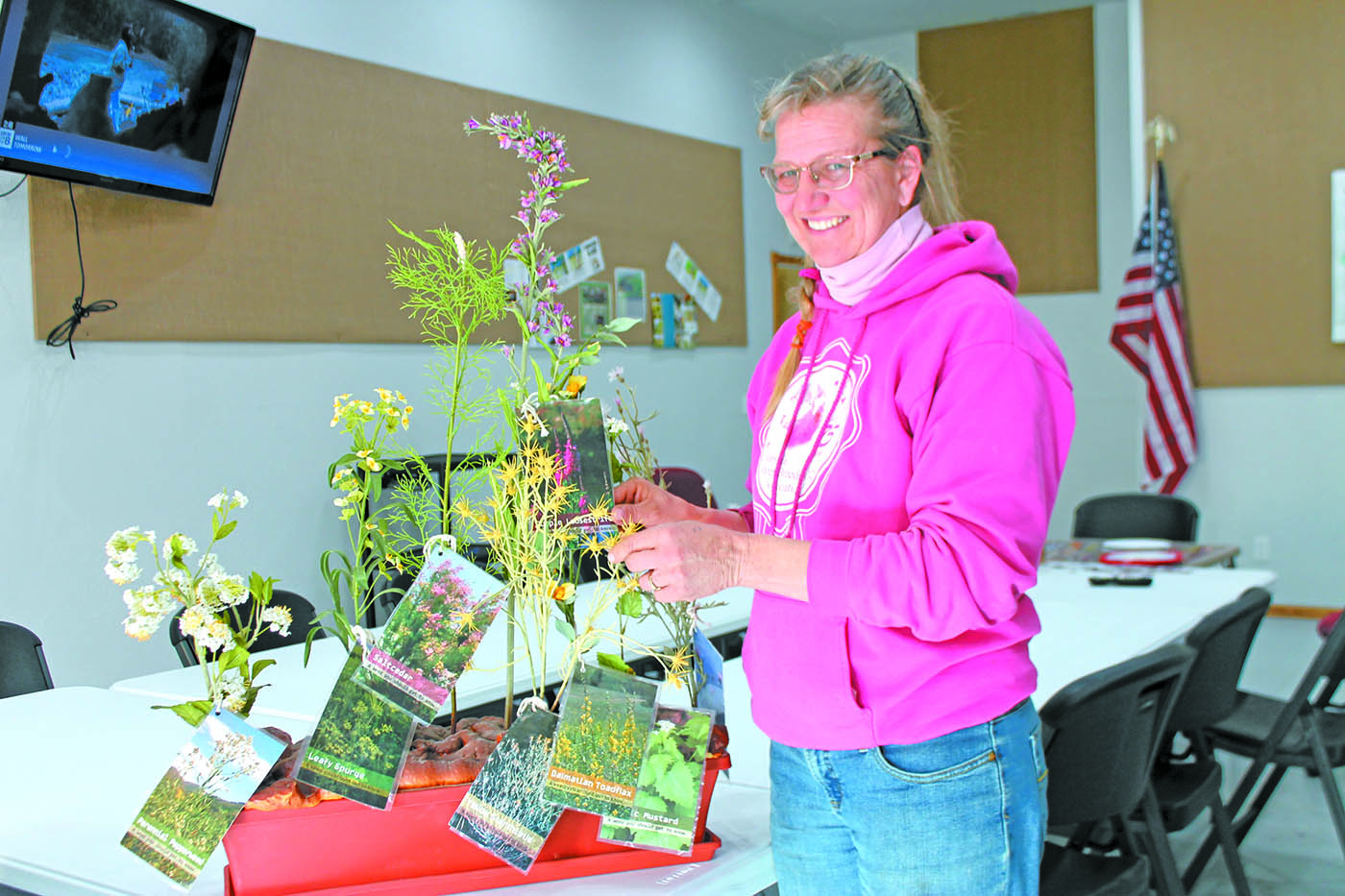 County Weed and Pest Supervisor Nina Steinmetz shows samples of plants that are designated noxious weeds. She presented a comprehensive 2018 report on her department’s activities and grants to the county commissioners. (Cathy Nelson/Fall River County Herald)

County Weed and Pest received a $5,000 S.D. Department of Health grant for trapping, counting and testing mosquitoes for West Nile Virus. The traps were in Edgemont, Oelrichs, Buffalo Gap and Hot Springs. “None of the mosquitos we tested in Fall River County tested positive for West Nile Virus,” Steinmetz said.

One of the reimbursement grants her department received from the South Dakota Weed and Pest Commission was in the amount of $5,000 for the control of baby’s breath in the Smithwick area. Work started on April 1 with six private landowners participating. The total cost was $5,472.82, of which the county paid the $472.82 over the grant amount. The county will do all the spring applications as in-kind. Absinth wormwood sage was sprayed at the same time.

A reimbursement grant of $15,000 was received for controlling salt cedar. There was 100 percent reimbursement of the cost of the commercial applicator and herbicide. The county in-kind portion was $2,000 for supplies and $3,000 for personnel. The herbicide was applied along the Cheyenne River, the Right-of-Way ditches and private dams.

Steinmetz said one of the difficulties with managing salt cedar is when it becomes a “monster tree” before it is found, especially if it is spotted in steep rugged terrain. Another challenge is when small plants that are growing in the state’s right-of-way ditches are mowed before the county staff can apply herbicide. She said the outcomes are better when interagency teams work together, no matter on which side of the fence the salt cedar is, and when landowners care and report salt cedar. She said they are doing some pre-work now on salt cedar so that it can be controlled in the fall when it is green.

A reimbursement grant for $15,000 was received for controlling weeds along Hat Creek and Indian Creek in the southwest corner of Fall River County. The area covered was 40 miles of the 59 miles of creek bottom, with eight landowners participating. Each landowner was allowed $250 per mile of creek that flows through their property. The invasive weeds that were sprayed included Canada thistle, common mullen, hoary cress and salt cedar.

Steinmetz announced the 2019 Weed Board officers. They are President Jerry Wyatt, Vice President John Sides, Secretary Nina Steinmetz, and board members Bob Novotny, Wayne Hageman and Joe Falkenburg, who is the commissioner representative. Karen Jamison is the office manager.

Steinmetz said that during the winter she keeps her eyes on the locations where landowners feed their cattle because the hay can contain weeds that grow and cause problems in the spring. She also checks for hay bales that may have fallen off of trucks and landed in the ditches that also can spread weeds.

Maynard said that Federal Surplus has Philips AEDs (Automated External Defibrillators) on surplus. He acquired four units at the cost of $100 each. The units need batteries and pads. They will be placed on the first and second floors of the courthouse, and in the South Annex and at the Highway Department. There will be in-office training and manuals will be available. He has applied for a Homeland Security Grant for radios for various county departments.

The Annex Room in the South Annex is available to be reserved for meetings by governmental agencies and nonprofit organizations. Reservations are made through the Auditor’s office. (See separate story)

Sheriff Bob Evans asked the commission for an increase for meals and lodging allowances when transporting prisoners long distances. The commissioners asked Evans to present a proposal at the March 19 meeting. The commissioners approved hiring David Weishaupl as a jailer at $12.50 an hour. Evans said he would like to hire at least two more people for the dispatch crew.

Commissioner Paul Nabholz brought up the subject of the Chilson Bridge again saying he didn’t want the county to spend the money to replace the bridge. The state will pay $966,000 of the cost whether a road or a bridge is built. He also asked about the missing recording of the commissioners’ meeting on February 19. The recorder was not turned back on after the break during the meeting. There is now a red light that should be lit when the recording is on, which the commissioners can see.

State’s Attorney Brian Ahrendt asked commissioners to approve the purchase of a new computer for his office at the cost of up to $750. He will check the sales on computers. The commissioners approved the purchase.

Director of Equalization Susie Hayes said she strongly encourages people to call her office if they have questions or concerns about the recent assessment they received in the mail. The office has a log to keep track of calls and will call people back if the line is busy. “They don’t need to be intimidated,” she said. “Overall, the entire county went up 10 percent in value,” she said. Information is posted on the website. The phone number is 745-5136.

The commissioners approved a pay raise for Aaron Eberle to $13.81 an hour. She is administrative assistant in the auditor’s office.

The commissioners approved a 50-cents raise for the county weed sprayers. Weed Supervisor Nina Steinmetz said the people who have been spraying had not received a raise for three years.

The new 4-H Youth Advisor Erin McGlumphy introduced herself to the commission and said she enjoys this area and looks forward to working with the youth.

The next county commission meeting will be held on March 19.