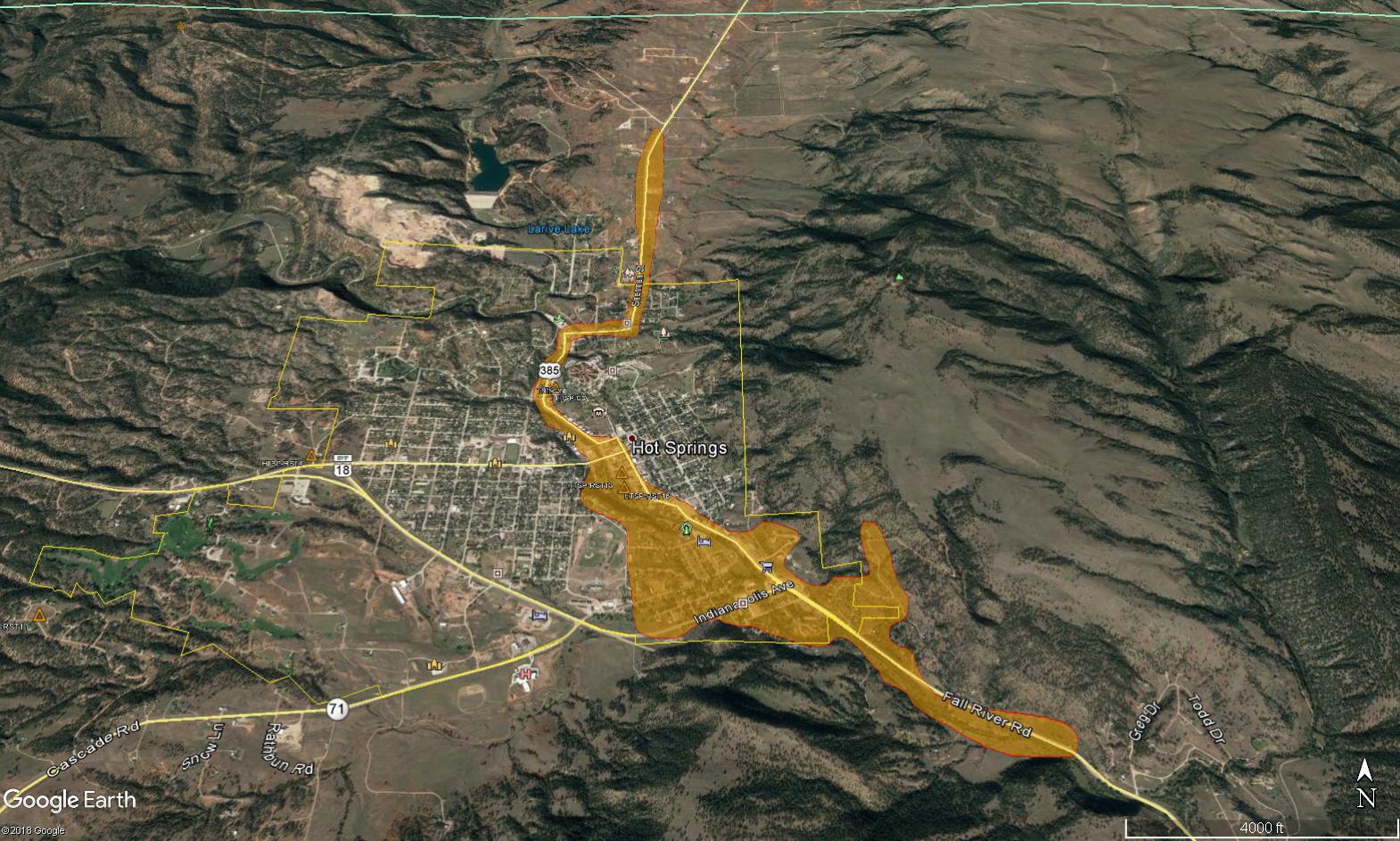 This Google Earth map shows Golden West’s planned Phase 1 portion of  the “Fiber To The Home” project in Hot Springs, highlighted by orange. Engineering Manager Marty Huether pointed out that the map shows a general representation of the area where the fiber optics will be installed and is not 100 percent accurate in depicting each and every location being served. If current subscribers or potential new customers are wondering if they will be part of the Phase 1, Huether said they should call the engineering department to verify. Much of the portion of town  west (left) of the orange-shaded area already has fiber optics, while the portion of town to the east (right) is scheduled to get it Summer 2020. (Courtesy illustration)

HOT SPRINGS – After converting their customers on College Hill in Hot Springs to fiber optic transmission lines a few years ago, Golden West Telecommunications last week announced details of their upcoming Fiber To The Home (FTTH) project that will now add downtown Hot Springs, and those residents who live near Hwy. 385 that runs into town, to the list of fiber customers.

Oleson, and several other Golden West employees and contracted personnel, were on hand at an Open House event held last Thursday evening, Feb. 28 at the Mueller Civic Center, where they shared details about the construction process and timeline.

Once the FTTH upgrade is completed, Golden West will deliver its services over thin strands of glass called fiber optics – fibers that use pulses of light to carry data, as opposed to electronic signals over copper wires, which is what is being done now through much of the town. Oleson spoke about the difference customers will see after the fiber is completed, including stronger, even more reliable connections and the availability of Golden West’s fastest Internet speeds.

The need for these more advanced capabilities are due to the ever-increasing demand by customers who use multiple internet devices in their homes as well as the growing desire by customers to use livestream video services like Netflix and Hulu.

Marty Huether, Golden West’s Engineering Manager, said that Phase 1 of the Hot Springs project is expected to get underway in March and will continue in April and May with inside wiring at each of their customer’s homes and places of business. The actual construction of the buried fiberoptics will start in May, but all is subject to change due to weather. The construction process includes plowing the main lines of fiber, installing underground vaults, and lawn plowing to bury fiber optic cable to individual homes and businesses.

Construction of Phase 1 of the project is expected to be completed by Fall 2019.

Since it is a construction project, it was noted by Huether that cleanup will be an ongoing aspect of the process and may be an inconvenience to some, but shouldn’t be for an extended amount of time.

A couple dozen people attended last week’s event, and during the Question & Answer phase of the event, most of the public’s questions revolved around whether or not their homes would be part of the Phase 1.

John and Karen Phelan, who live in the Valley View Estates area above Taco Johns, asked if their home would be part of the project, despite not being a part of the City of Hot Springs and outside of the Golden West’s current cable television service area.

Chad Olstad with GoldenWest confirmed that Valley View is part of the planned area to get fiber optics, which pleased the Phelans as well as others in attendance who live in the same area. Maps were made available for residents to look at afterwards to show where the planned fiber lines would be placed.

One attendee of the meeting asked about ensuring his mother’s home did not get left off of the construction phase, due to her not living in the home year-round. Huether urged him, and others, to call the Golden West customers service line to make them aware of the situation to ensure timely in-home scheduling of both the in-home wiring and the underground placement of the lines.

Huether noted that while the contractors will identify major buried utilities, customers should also work with Golden West to locate any sprinkler and septic systems, alarm or invisible fence systems, or similarly buried services to ensure they are not damaged during plowing.

Another Golden West employee, Rick Reed, spoke to the attendees about the changes they can expect to their cable service, which includes a new smaller cable box for each television, the ability to pause live TV for all customers and new features for DVR customers which allows one to restart programs from the beginning – going back 24 hours into the program schedule.

The amount of DVR recorded programs one is allowed to be stored at one time will also greatly increase because they are now stored on a server at Golden West, as opposed on on the DVR itself. A near unlimited amount of programs will also be able to be record simultaneously, Reed said.

Golden West has contracted with Hylan West to complete the main construction portion of the project for Hot Springs. Contractor Swiftec Electric will contact customers to schedule clamshell (a box that holds fiber components) installation and inside wiring. Golden West will handle all issues related to easements, permits, and inspection.

Several Golden West customers in Hot Springs have already been enjoying advantages of fiber optics after it was put into place in residences and businesses on College Hill and all around the Hot Springs School District. The FTTH project beginning this spring will bring fiberoptics to 235 more customers in the central part of the community, from the far north city limits to the far south city limits and slightly beyond.

Huether noted that the construction will begin around their own office facilities in downtown Hot Springs and then expand northward along Hwy 385, before coming back south to Valley View.

Next summer, the third and final portion of town on the eastern side will get fiber as well, which will give the entire two-year project a 2020 completion date.

It was discussed that part of the delay in getting fiber to the downtown area was due to Golden West waiting for the S.D. DOT to finalize their plans for reconstructing Hwy. 385. Huether said that since that road project is now looking at a later completion date than first planned, Golden West decided that they could not wait any longer and decided to go ahead with their plans now.

Huether said their fiber optics will now need to be placed well outside of the roadway to ensure that it is not disturbed when that road construction project gets underway later.

“We’re eager to start this project,” said Huether. “Upgrading our network to fiber will be a huge boost to the customers and communities we serve.”