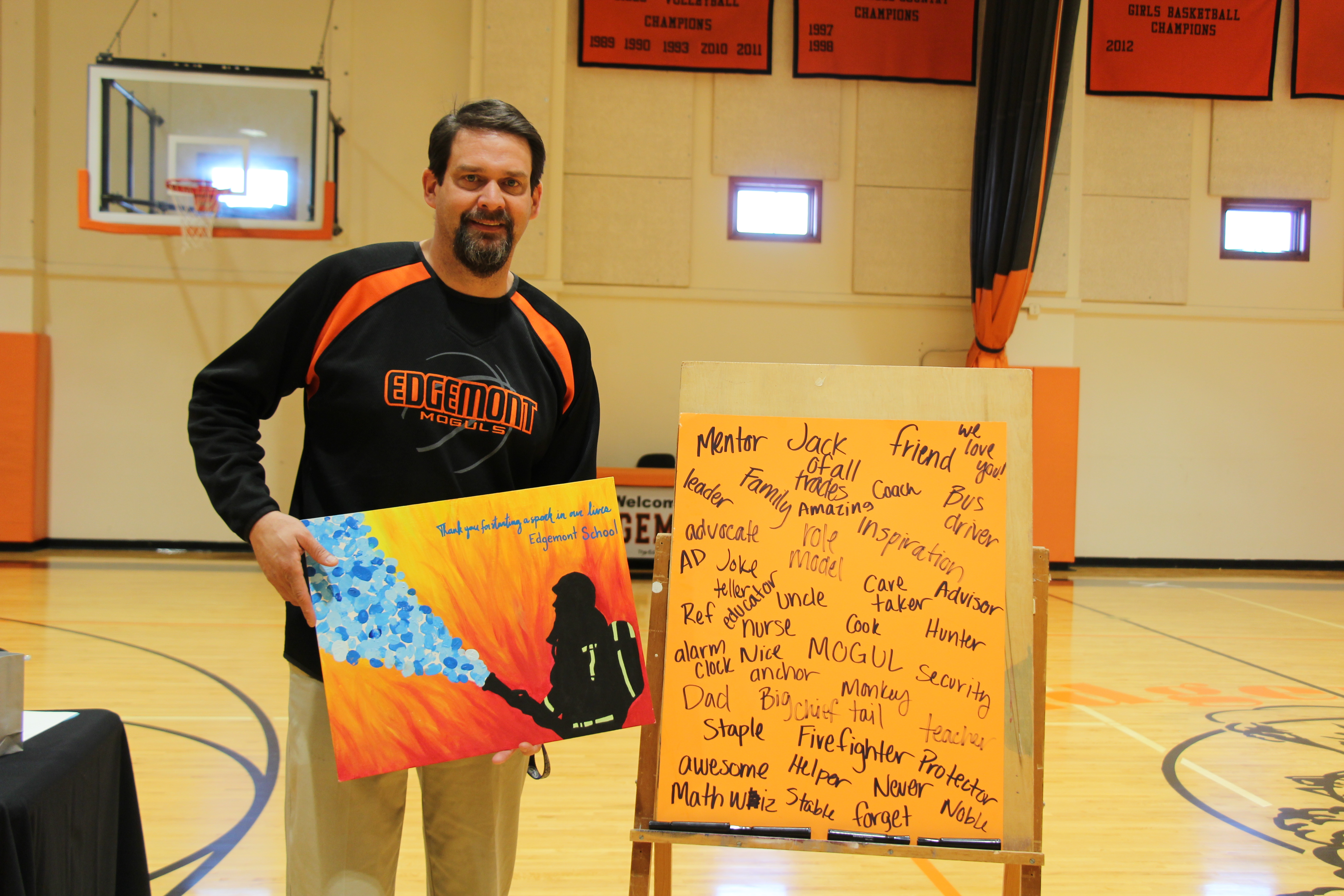 Lane Ostenson holds up a painting that was created for him on behalf of all the Edgemont students that says, “Thank you for starting a spark in our lives” and shows an image of a firefighter putting out a fire. Each student in the school also put their fingerprint on the painting to create the water. Ostenson’s last day at the school was Feb. 28, after accepting a position with S.D. Wildland Fire in Hot Springs. (Rhea Falig/Fall River County Herald)

Teachers and students jokingly surprised beloved teacher and coach with what they referred to as a “mugging,” which was a lighthearted gesture thought up by Pamela Koller, a teacher at the school, for Lane Ostenson’s last day.

According to faculty, Ostenson had a habit of leaving his mugs everywhere and thought this would be a funny send off after 15 years of service with the school.

In the mix of the laughter was also many tears shed as everyone prepared their hearts to say goodbye to Ostenson, lovingly referred to as “Mr. O”. He was welcomed into the assembly with a standing ovation to honor his last day. Students stood to their feet cheering and making the shape of the letter O with their arms.

In addition to the “mugging” Mycalynn Osborne the school’s art teacher, had students of all grades help create a painting that said, “Thank you for starting a spark in our lives” and showed an image of a firefighter putting out a fire. Each student in the school putting their fingerprint on the painting to create the water.

Amy Ferley, the school superintendent, had students yell out descriptors of who Mr. O has been to them over the years, while Mrs. Osborne wrote the words out on a blank canvas. One little girl yelled through the crowd, “I love you!” While others shouted words like, “mentor, leader, dad, staple, friend, protector, inspiration” and more.

A journey that began in the 2003-04 school year where he joined the faculty as the PE/Health teacher and Dean of Students came to a tearful end as students and teachers present at the assembly lined up to give hugs and say a final goodbye.

Over the last 15 years with the school, Ostenson carried many different titles. Including Teacher, Coach, CEO, Activities Director, Transportation Director, and Dean of Students. Athletic Director. Coach. He’s filled in as a maintenance guy, he’s mowed the lawn. He was involved with bringing the YMCA to Edgemont. However this day wasn’t about titles, but students having an opportunity to tell Mr. O what he has meant to them personally.

Ostenson announced his resignation at the Jan. 17 school board meeting. While he will no longer be at the school he will still be residing in Edgemont as well as serving as the Fire Chief for the Edgemont Volunteer Fire Department.

Ostenson will be the new Interface Technician with South Dakota Wildland Fire in Hot Springs. Working with private land owners in the Wildland Urban Interface on fuels mitigation to aid in the prevention and suppression of wildfire.

In regards to the assembly held in his honor, Ostenson said, “I’m so appreciative of the staff and students. It was truly surreal and unbelievable the appreciation and support they give and show me. It was a special and neat day I’ll always remember.”