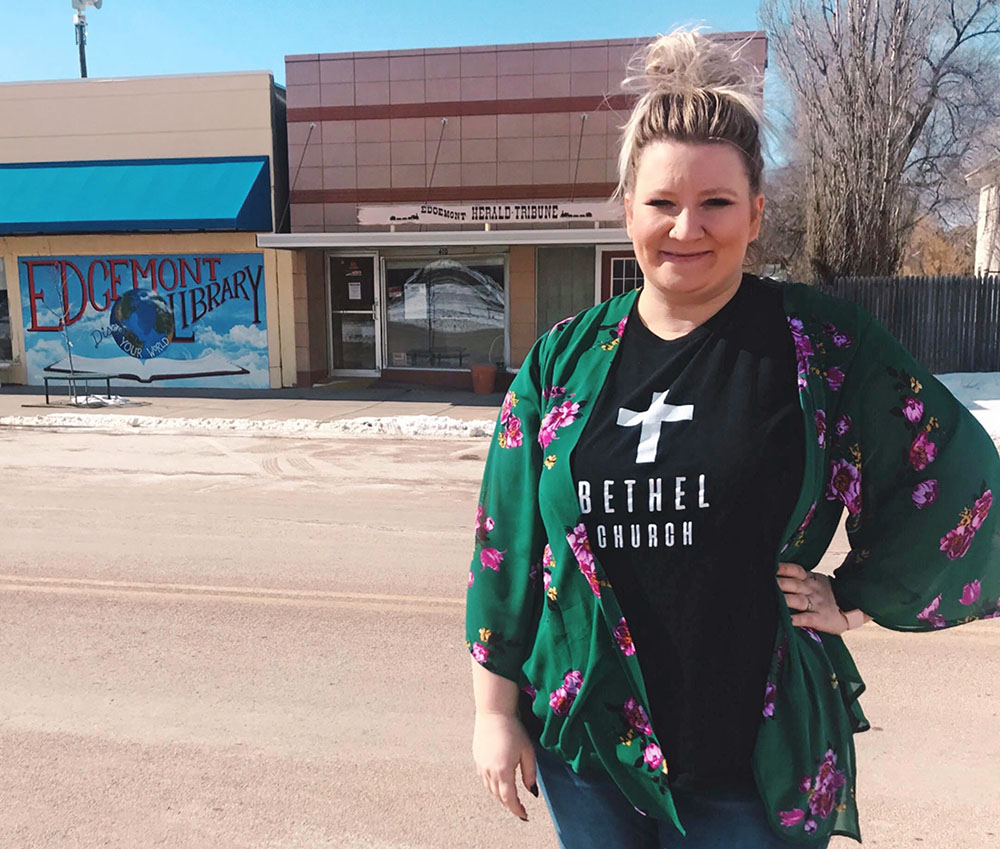 Rhea Falig stands in front of the downtown Edgemont office of the Fall River County Herald, located at 410 2nd Avenue.

EDGEMONT – A face familiar to many in the community of Edgemont has joined the staff of the Fall River County Herald.

Rhea Falig, who is also the Pastor of Bethel Church in Edgemont, will be the Herald’s new Edgemont community reporter and available part-time in the newspaper’s downtown office two days per week. Falig also volunteers as a director for the Edgemont Area Chamber of Commerce.

While her primary career will remain as being a pastor and focused on moving forward in the vision of the church, she said she is looking forward to serving her community in this new way.

“I’m excited to combine my love of photography and writing with my love for the community, and to tell the stories that make Edgemont such a wonderful place to live,” Falig said.

She and her husband Eric, along with their three sons Josiah (11), David (9), and Judah (6) moved from Southwest Missouri to South Dakota in 2016 and commuted from Rapid City to Edgemont every Sunday for nine months until moving into the community in the summer of 2017. She loves spending time with her family and exploring the beauty of the Black Hills.

Her church, Bethel Church, is a multi-campus church located out of Rapid City with a heart for rural America. Their church campus started with just a couple families in 2016 and has since grown to over 100 on Christmas Eve.

Falig said Bethel Church has a unique emphasis on loving the community, including hosting an annual Back To School Fest where their church gives free backpacks and school supplies to every student in Edgemont. As well as free vision and hearing screenings, hair cuts, and more.

When she’s not serving her congregation, Edgemont residents  can find Falig at the Fall River County Herald’s Edgemont office Mondays and Wednesdays from 10 a.m. - 2 p.m.

Stop by and say hello, get some free coffee, and share your stories. She is looking forward to meeting you.