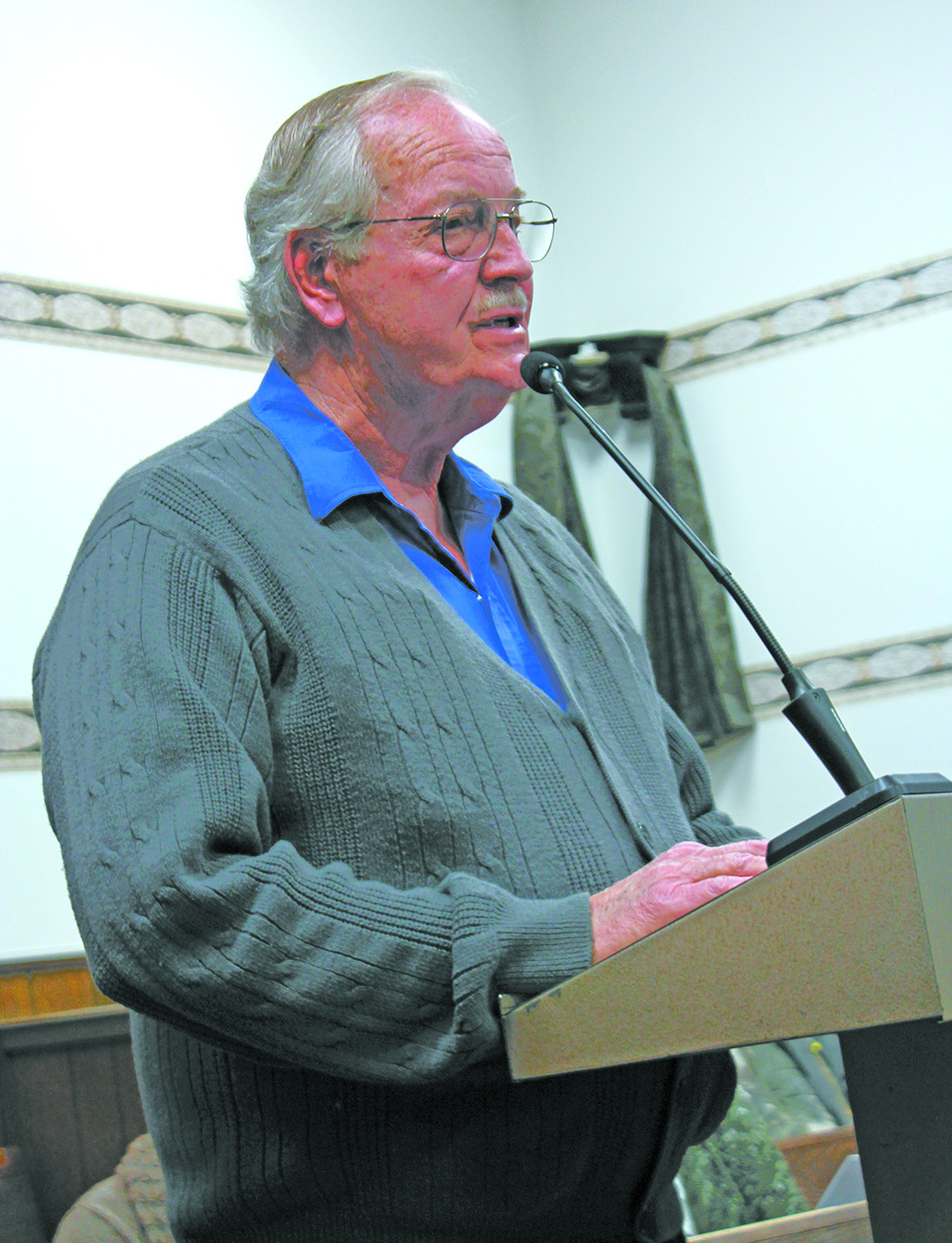 HOT SPRINGS – When the Fall River County Commissioners met on Tuesday, Feb. 19, they tackled a conglomeration of topics from gravel crushing to bridge building to approving tax abatements. The public in attendance asked questions and made comments, but had to be reminded by the commissioners to step up to the microphone and introduce themselves before commenting because the meeting was being recorded for public access on YouTube.

Maintenance Supervisor Lyle Jensen presented the costs for the audio video equipment that was purchased to record commission meetings. The audience commented that they could not hear people speaking on the recording, so a speaker and stand were added at the cost of $600. Jensen said it was discovered that the hard drive in the computer was not fast enough so Haggerty’s AudioVisual of Rapid City exchanged it for a faster laptop at an upcharge of $200. Haggerty’s lowered the cost of the speaker, Jensen said. The total cost of the recording equipment is $10,961. The commissioners approved the final billing for the equipment.

Emergency Manager Frank Maynard discussed the CodeRED system with the commissioners. CodeRED was designed as a notification service capable of reaching hundreds even thousands of citizens in minutes. Included are automated severe weather alerts, integrated access to the nation’s alerting system and notifications for the community and staff. Examples of notifications could include evacuations, Hazmat emergencies, street or road closures, severe weather, and much more. Maynard said anyone who wants to receive the notifications will need to sign up and can specify the kind of alerts they wish to receive. Maynard recommended purchasing the medium cost system for $2,300 a year. Stacey Martin expressed a concern about the time it would take to keep contact addresses and phone numbers current. The commissioners approved postponing a decision about CodeRed until they receive further information.

Maynard reported that he has applied for a Homeland Security Grant for radios for Emergency Management and the County Highway Shop. He will be notified in August or September about receiving the grant, he said. He also reported completing eight hours of instruction on “Understanding & Fighting Basement Fires” presented by the International Society of Fire Service Instructors.

Commissioner Joe Falkenburg presented information on wind farms and expressed concern that the county does not have a policy written. “We need a policy in place,” Falkenburg said. He requested that creating a wind power policy be included on the March meeting agenda.

Treasurer Kelli Rhoe gave the commissioners a list of seven names, land parcels and amounts of delinquent taxes that are in the final stages of the deed process. She said that everyone on the list has been served notices by the county sheriff, and the 60 days have passed for them to respond, so the properties are ready for the county to take the deeds. She has requested that the Equalization office provide information on the properties, including pictures and assessed values, so they are available before the tax sale. The taxes on the seven properties add up to $25,520.78.

Commissioner Ann Abbott is putting together a Land Use Planning Committee. A policy was drawn up and adopted by the Fall River County Commission in April 2011. The policy states that the elected government of Fall River has a solemn duty to protect the health, safety and welfare of the county’s citizens. In brief, some of the items included are good forestry management, safe mineral extraction, control of noxious weeds, a balance in the wildlife community, no reduction in public access to public lands for purposes of tourism and recreation, opposition to any reduction of grazing allotments or any change that hampers agricultural industry. Abbott said that anyone in the county who is interested in being on the committee should let her know.

During public comment Gerold and Mary Herrick asked the commission questions about the Bulldoze, Build and Beautify (BBB) program. Commissioner Russell said the BBB is a state program that was started because there are so many houses in the state that are dilapidated. “We (commissioners) are still investigating to see what our part would be,” she said.

County Assessor Susie Hayes was next to speak. “I encourage people in the community to get involved,” she said. “Do we want growth or just maintain where we are?” Hayes also presented tax abatements, which were approved by the commissioners.

Housing Executive Director Greg Foust appeared before the commission to discuss proposed resolution 2019-6 that would allow participation of Hot Springs’ HUD-based properties Brookside Apartments and The Evans in the existing Fall River Housing & Redevelopment Commission, which currently owns and manages the Hillcrest Apartments in Edgemont.  The proposal is consistent with South Dakota Codified Law 11-7-7-2. Foust discussed expanding the membership of the housing commission to six members in order to create a balance between Fall River County and the City of Hot Springs representation. The Chairperson would not normally vote on items of business unless there was a deadlock of the other voting housing commissioners. The county commissioners approved the resolution, with Nabholz voting ‘nay’ saying he wanted more information on liability that Fall River County might be assuming with the proposal.

Highway Superintendent Randy Seiler presented the 2018 year-end report. Commissioner Russell said Seiler gave the commissioners a summary of every road in the county including the work the department did on each road and what the costs were.

Commissioner Paul Nabholz said he would like the Chilson Bridge, which is located on old Highway 18 north of Edgemont, to be replaced by filling in the gorge and raising the Mikkelson Trail and then to construct a road rather than a bridge, because it could be done with the amount of money offered by the state to build a bridge. In 2018 the commissioners approved by a four-to-one vote to build a replacement bridge, and after discussion last Tuesday, there was no change in the plans.

After meeting in executive session for negotiating the state’s attorney’s salary, the commissioners approved a Fall River County salary of $73,000 for Brian Ahrendt, who will take over the position of state’s attorney on March 1 to replace Jim Sword, who recently resigned. The state’s attorney’s Oglala Lakota salary is $25,000, which Ahrendt will receive on top of the $73,000. He will work at the courthouse and no longer be at the Sword and Ahrendt Law Office. No deputy will be hired. Ahrendt will handle both magistrate and circuit courts.