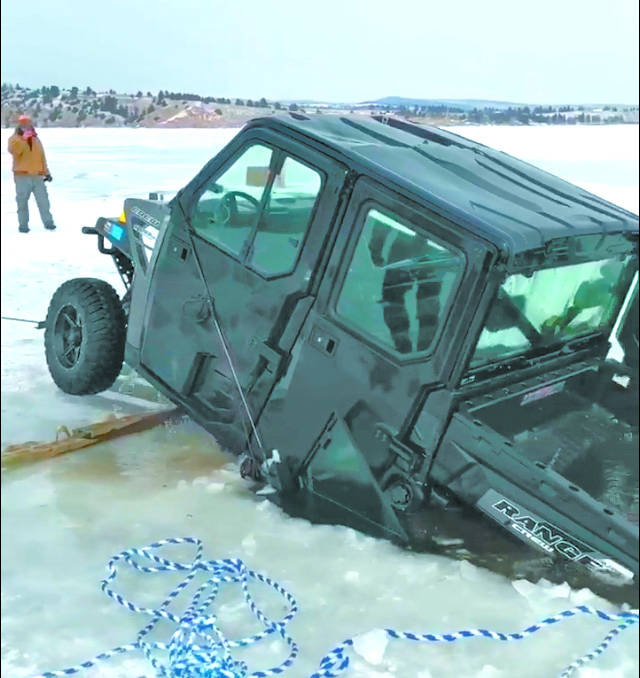 A 2016 Polaris Ranger crew cab gets pulled from a hole in the ice at Angostura this past weekend. (Screenshot of video by Steamboat’s Inc.)

ANGOSTURA – A Rapid City ice fisherman had a big scare and lost his Polaris Ranger to the icy depths of Angostura Reservoir, but is otherwise okay following an incident earlier this month.

According to Angostura State Park Supervisor Jason Gooder with the GFP, the man was ice fishing with a couple of friends from Rapid City on Saturday, Feb. 9. He said they fished until dark and decided to head back to the North Boat Ramp located on Summersun Resort.

The fisherman, who asked to not have his name or his passengers’ names included in this story, was contacted by telephone on Monday and described the incident and said that it took place in the dark at about 8 p.m. He said after getting off of their original tracks to pick up the other fisherman, they were traveling at about 10 m.p.h towards the North Boat Ramp when he felt the rear end of his Ranger break through the ice, which prompted him to immediately yell at all of his passengers to get out. Quickly afterwards the front end of the Ranger began to also sink.

The Ranger itself featured an enclosed cab with four doors. The driver said that he and the older gentleman he had picked up were sitting in the front seats and were able to escape after getting only about half of their bodies wet. However, his two friends in the backseat became submerged with the Ranger and had to escape from underwater and swim to safety.

The location in which the 2016 Polaris Ranger crew cab went into the water, Gooder said, was midway between Island Estates in the Sheps Canyon area, and Hobie Beach on the northeast side of the lake (See map).

Gooder said that portion of Angostura has been known to feature inconsistent ice conditions this winter, and grows and shrinks depending on the weather. He said there was even a considerable amount of open water there recently, but had since frozen over and covered with a skiff of snow.

Despite many fisherman reporting ice thickness of 13 inches over much of the lake, that isolated area has had much thinner ice.

The Pierre-based companies Steamboat’s, Inc., and Central Divers LLC, performed the extraction of the side-by-side from 30-feet of water on Sunday, Feb. 17. The company has posted a video on their Facebook page of the Polaris being pulled from the hole in the ice.

The scary incident serves as a reminder to all ice fisherman of the potential dangers of being on a frozen lake.

“Its important to maintain situational awareness and basic ice safety,” Gooder said. “Ice conditions are dynamic and can change.”

Gooder added that Angostura is typically not a heavily fished lake in the wintertime, perhaps partly due to the climate, he said. Because of that, there are not any permanent ice fishing houses located on the water, but those who do ice fish here, often do so with portable ice houses, or tents, that are either pulled or carried by ATVs and UTVs.

The UTV in this case was transporting one of these portable ice houses. In a drone photo taken by Gooder four days after the incident to establish the precise location, the top of this ice house, known as an Otter Shack, is visible sticking out of the hole and floating on the surface where the vehicle entered the water.

A tool that Gooder recommended all ice fisherman use is an app for your smart phone called “Ice Report” which allows fishermen to log and map ice thickness on various lakes. He said rhe more people who use this app, the more educated other fisherman can be about the ever-changing ice conditions around them while on the lake.