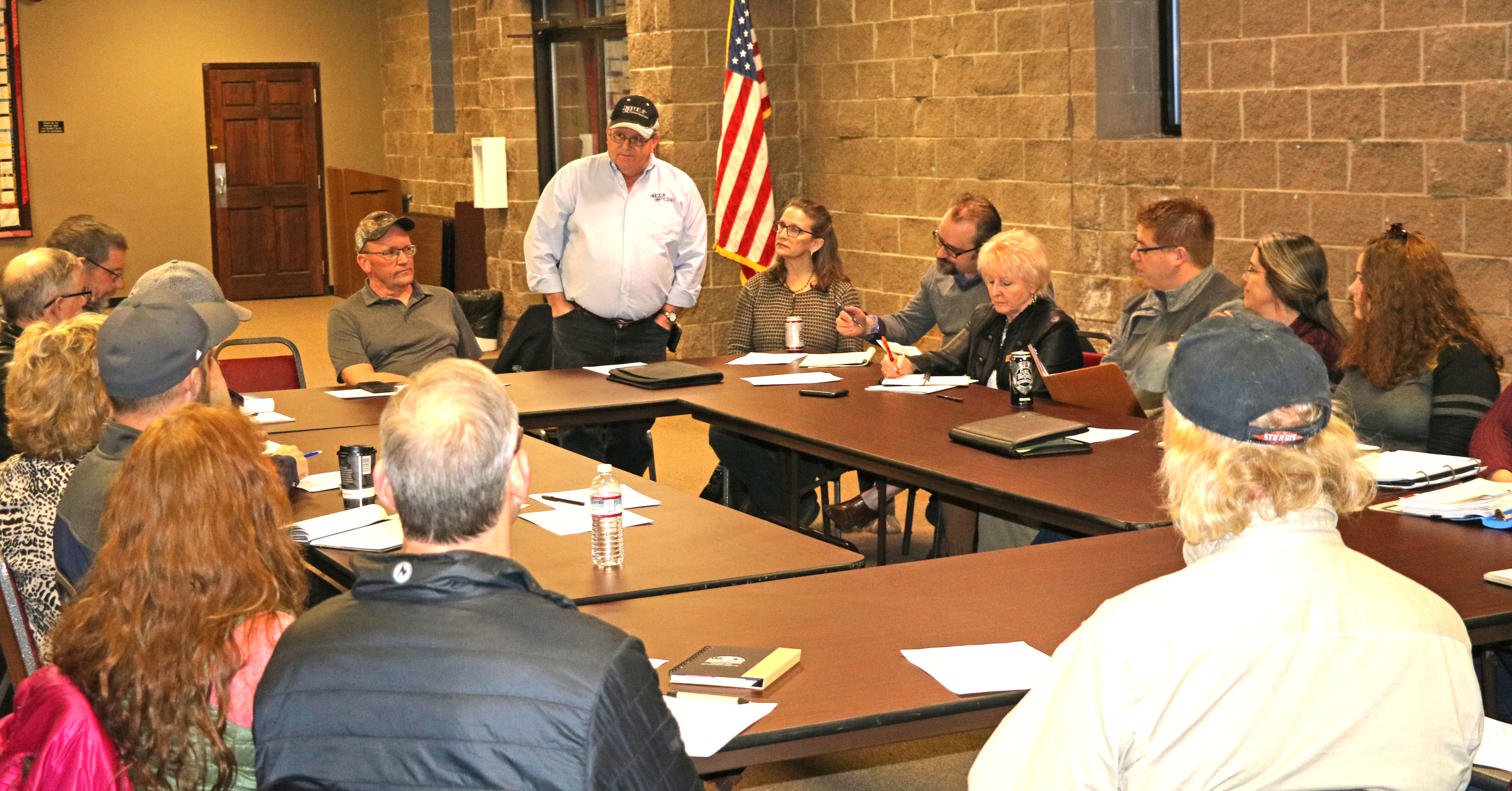 Dean Hedrick with Hult Homes (standing) speaks to a roundtable full of interested parties during a Housing Initative meeting last Tuesday night, Feb. 12. Hedrick, a former Hot Springs resident, was in attendance to announce his company’s hopes of building workforce housing in Hot Springs on land that may potentially be donated by the State Home for that exclusive purpose. (Photo by Brett Nachtigall/Fall River County Herald)

Spitzer, who owns and operates Spitzer Construction in Hot Springs, also chairs the Hot Springs Housing Empower Committee that met last Tuesday night, Feb. 12, and has been meeting regularly since the town went through a Community Engagement Project in 2016-17. That process was organized by the City of Hot Springs, Southern Hills Economic Development Corporation and Dakota Resources, which among other things, helped generate a housing study and identified assets and liabilities in the area of infrastructure.

Kicking off the night’s roundtable discussion was Dean Hedrick, representing Hult Homes which has offices in Rapid City and Casper, Wyo.

A Hot Springs native with six generations of family from the community, Hedrick said he has a “deep passion for Hot Springs,” and has been helping serve as a consultant for the community for the past few months and advising them on various workforce housing options.

“I’m no longer coming down as a consultant, but instead as a builder/developer,” Hedrick stated, while also pointing out that the goal of his company’s involvement is to, of course, make a profit. Hedrick says Hult Homes specializes in the construction of workforce housing projects and has built a number of those types of homes in the Box Elder area near Rapid City.

That unique opportunity, Hedrick said, involves the State of South Dakota donating 20 acres of land and 16 city lots – adjacent to the State Veterans Home – to the Southern Hills Future Foundation (SHIFF), who would then make that available to Hult Homes for the specific purpose of constructing work force housing. Hedrick said his company has had in-depth conversations with Gov. Kristi Noem and her office about the possible transaction, and sited her interest in it as a way to help ensure adequate housing, not only in general for Hot Springs, but also specifically for State Veterans Home employees.

State Home Superintendent Brad Richardson was present at the meeting, and while he was not there to speak on behalf of the Governor, he did say that the State Home did increase its staff by 35 people in 2016. He said, as they look to the future, they could be seeing similar growth in the coming years. While many are lower, entry level positions, the growth could also be higher lever positions as well.

Discussions about the State donating the land for workforce housing is ongoing, and not a final decision at this point. But if it were to become a reality, Hedrick said Hult Homes is excited and “committed” to become “a part of the housing solution in Hot Springs.”

“Southern Hills Future Foundation will only act as a pass through facilitator,” said Spitzer. “It is yet unknown what the Governor’s mandates tied to that transfer may be, but SHIFF stands ready to do what is necessary.”

Hedrick said that any effort to build workforce housing in a community involves considerable risk. He said that while the housing needs of the State Home and the VA Call Center are well-defined, the risk for a construction business is “praying that the other side holds up there end” once the homes are built.

“You make up for that in volume,” Hedrick said, while adding that it wouldn’t be worthwhile to come to Hot Springs and build only three or four homes. They would need to set up a more permanent building work schedule, he said.

Their goal then would be to first build a 12-plex housing complex on the State Home land, and then begin constructing a series single-family homes after that.

Hedrick said “workforce housing” is based on median levels of a two-income family household of $75,000 to $80,000 for Hot Springs, and not defined by housing features, like square footage or a garage. He urged those in attendance to leave the “building and economics” up to them to make feasible. Hedrick also said they would be willing to work with non-profit housing groups like NeighborWorks and others, and was also open to sharing the opportunity with other constructions companies who would like to build on the State Home land as well.

He also said that Hult Homes is open to working with local realtors and subcontractors on all of their work in Hot Springs, but was also very clear that it would have to make financial sense to do so and that they would not hesitate to bring in out-of-town subs if they could do the work at a lower cost.

Hult Homes’ efforts in Hot Springs on the State Home land would be strictly for workforce housing, Hedrick said, adding that their intentions are to not compete with any of the local custom builders.

Mayor George Kotti pointed out that there are plenty of opportunity for higher-end homes to be built elsewhere in the city, including at the golf course.

Following Hedrick’s talk, Spitzer asked others in attendance to weigh-in on the topic which drew comments from Joy McCracken, the executive director of NeighborWorks which is a nonprofit organization with a mission to create decent, safe and affordable housing in Black Hills communities for families who have limited options to homeownership. They also offer free homebuyer’s education classes, credit counseling and housing rehab services.

Spitzer said it was important to have potential home buyers in Hot Springs come forward and show interest in supporting a local homebuyer classes.

“These are important to help inform the public of what is coming and bring those out to discover what programs are available to low income families to actually own a home,” he said.

NeighborWorks owns the land which was the former location of the water tower along 23rd Street, after it was donated to them by the City of Hot Springs. She said that her organization is looking at placing Governor’s Homes on those lots through a program that would create a perpetual source of affordable housing in the community.

During a brief discussion about the Habitat for Humanity program, Hot Springs City Administrator Kim Barbieri said that her office had recently identified 61 homes in Hot Springs that could be eligible for either removal under the state’s Bulldoze, Build and Beautify program or some other rehab program.

Barbieri said that trailer homes did not make for a good option due to the fact they lose value quickly, similar to taking a new car off the lot. She added that many of Hot Springs’ current trailer parks are in such a bad state of repair that they could be condemned, and implied that creating more trailer parks would add to the problem instead of help resolve it. Kelly Cope with the Southern Hills Economic Development Corporation also stated that there are very limited financing options for homebuyers to purchase trailer homes, as opposed to stick-built homes that typically increase in value over time.

Aside from Nabholz’s questions, the overwhelming consensus of those in attendance were very positive towards the plans discussed to address the workforce housing need in Hot Springs.

Realtor Darla Stevens said she was very pleased with what she was hearing and said that when there is an inventory of houses available in Hot Springs, her phone always rings with people wanting to move here. Its only when the housing inventory is down that her phone stops ringing.

Director of Equalization Susie Simkins also expressed her support of what was discussed, but also emphasized the need to address all facets of housing needs – from low income, to workforce, to higher-end retirement housing – as there is a demand for all of them in Fall River County.

The City of Hot Springs’ Kotti and Barbieri expressed their pleasure with seeing everyone working together for the same goal to address the housing shortage.

“I hope we can all come together and make it happen,” Mayor Kotti said.