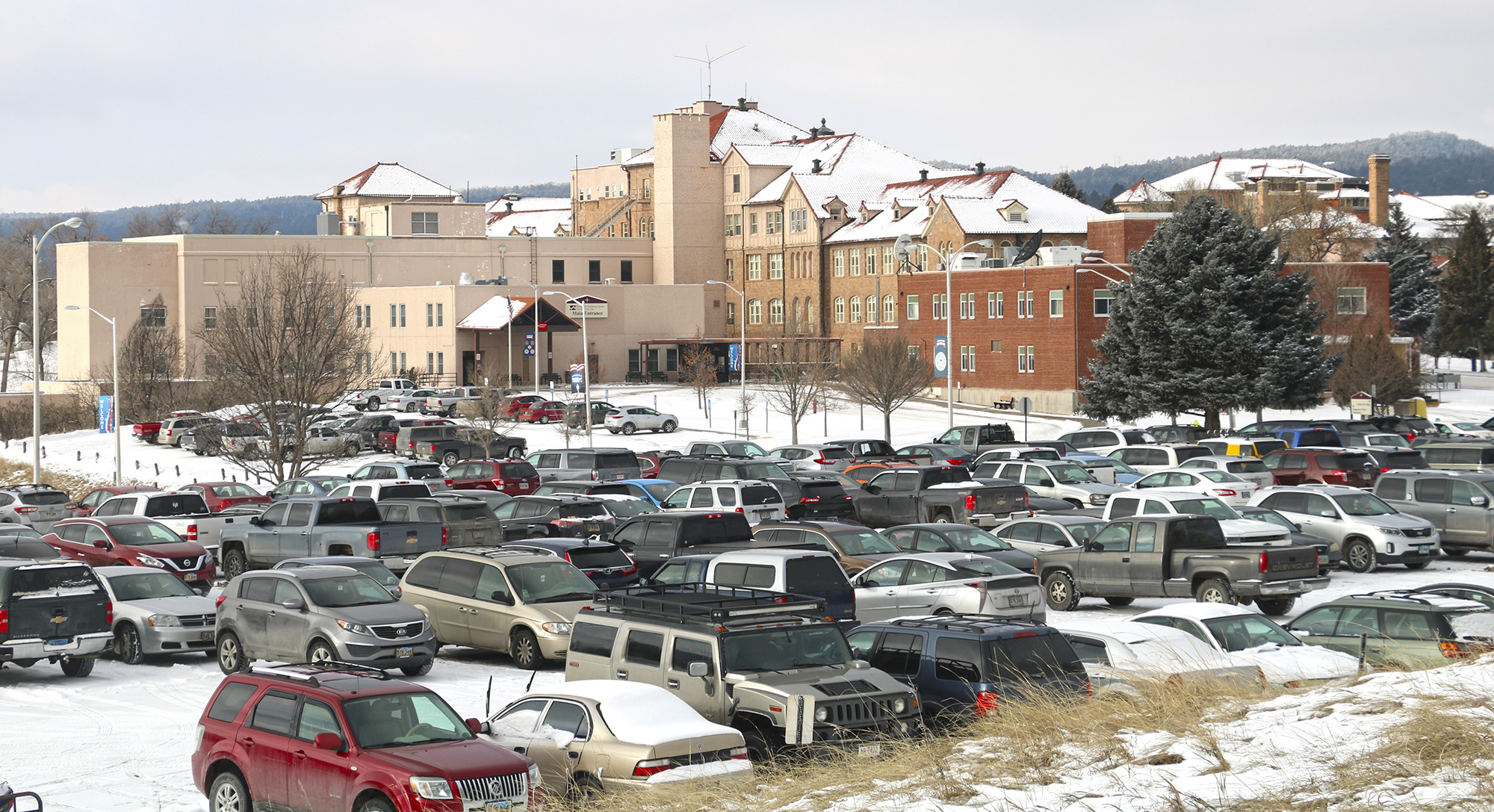 Employee and patient vehicles fill a parking lot on the east end of the Hot Springs VAMC campus this past Monday morning. While they announced plans to reconfigure the Veterans Affairs Black Hills Health Care System are currently on hold and awaiting a review process, local “Save The VA” volunteers have continued to meet weekly since December 2011 to discuss ways of ensuring to keep the Hot Springs VA Hospital open. (Photo by Brett Nachtigall/Fall River County Herald)

HOT SPRINGS – The date December 12, 2011, is a memorable one for anyone who was living in Hot Springs at that time.

For Bob Nelson, that day has a couple meanings in his life.

Not only is it the day of his wedding anniversary with wife Aletha, but its also the day the Black Hills Health Care System announced they would be closing the Hot Springs VA Hospital and Domiciliary, where Nelson was employed, to replace it with a Community-Based Outpatient Clinic (CBOC).

That then was also the day Nelson – and many, many others in the community – began the fight to “Save The VA.”

Its now more than seven years later and the Hot Springs VA is still here. But that’s not because the federal bureaucracy has changed its mind about their plans for the VA Black Hills Health Care System (VA BHHCS).

In a letter to the Fall River County Commissioners dated Jan. 11, 2019, Director of the VA BHHCS Sandra Horsman provided a status update and explained to all consulting parties that the reconfiguration plans are still in play but currently on hold and awaiting a review process.

“As you are likely aware, former Secretary Shulkin decided in May 2017 to defer the implementation of the decision to reconfigure VA BHHCS,” Horsman stated in her letter. “Since that time, Congress passed and the President signed on June 6, 2018, the VA Mission Act of 2018. The Mission Act requires VA to implement an agency-wide Asset and Infrastructure Review Process.

“The VA is currently working to comply with the requirements of the Mission Act. Consequently, the proposed VA BHHCS reconfiguration remains on hold. Because of these recent actions, the Final Environmental Assessment, Record of Decision, and implementation of Alternative A-2/G also remains on hold for the foreseeable future. Actions to reconfigure VA BHHCS as considered in the ROD will not be implemented now,” Horsman says.

Despite the reconfiguration plans being on hold at the moment, the work behind the scenes to “Save the VA” are certainly not on hold.

Throughout the past seven-plus years, the Save The VA Committee has continued to meet every single week to discuss the latest happenings with the state of the reconfiguration process.

Committee members who continue to volunteer their time and efforts each week to meet include the aforementioned Bob Nelson, along with Pat Russell, Bill Cutler, Don Ackerman, Don DeVries, Jeff Bottorff, Karen Meston, Stu Marty, Dr. John Schwarzenbach and also Amanda Campbell who calls in each week from her new home in Michigan. One of the original Save The VA Committee members Rich Gross, whose business has him traveling often, also joins in on the meetings when he can.

Both Nelson and Russell said last week that despite the VA’s reconfiguration plans being at a standstill on paper, they believe efforts are still being taken under the radar that appear to be undermining any hope of the government’s Asset and Infrastructure Review (AIR) Process coming out in favor of keeping open the Hot Springs VA Hospital.

According to Save The VA’s Russell, in Sec. Wilkie’s letter to Sen. Thune, he uses language that appears to support the VA’s original plans to close the Hot Springs VA Hospital and open a new outpatient clinic.

Russell added that there are a number of areas in Wilkie’s letter that has the Save The VA Committee very concerned because he sites inaccurate data that was used in the VA’s Environmental Assessment, including their notion of declining Veteran enrollment, high cost per patient care, the number of Veterans in Hot Springs and how Native American veterans are served by the Hot Springs VA.

Because of the statements made by Wilkie in his letter, one of the things that the Save The VA Committee is working on currently is a letter of response that highlights point-by-point analysis of his believed misstatements based on numbers and documentation that Save The VA has already utilized in the past, Russell said.

Another area of concern by the Save The VA Committee is their belief that data is still being manipulated to produce a predetermined outcome.

An example of this, Russell said, is that he is being told that oftentimes Veterans are being scheduled for medical services at Fort Meade in Sturgis, when they could just as easily have them done right here in Hot Springs. The appearance then, on paper, is that there is a declining need for those services in Hot Springs and that Veterans are instead wanting to go to Fort Meade for them.

“If they unnecessarily discontinue services now, its going to look worse for Hot Springs when the AIR gets here for their review,” Russell said.

Stories of cutting services and manipulating data is nothing new, Russell said, and has been an ongoing concern throughout the past seven years and continues to be for Save The VA, despite the reconfiguration plans being “on hold.”

Nelson agreed with Russell’s summation of the Wilkie letter, and said, “when you give it a read, it sounds as if they’re moving forward.”

Russell said Save The VA will be working on talking points to have prepared when the AIR Review Process comes to Hot Springs. Whenever that will take place, he said that they are hoping it will be an objective look at all of the data, and not just the data that supports a predetermined decision.

Nelson and Russell said the South Dakota delegation remains a constant source of support for the local Save The VA cause, including newly elected U.S. Representative Dusty Johnson, who replaced now-Governor Kristi Noem in the recent election.