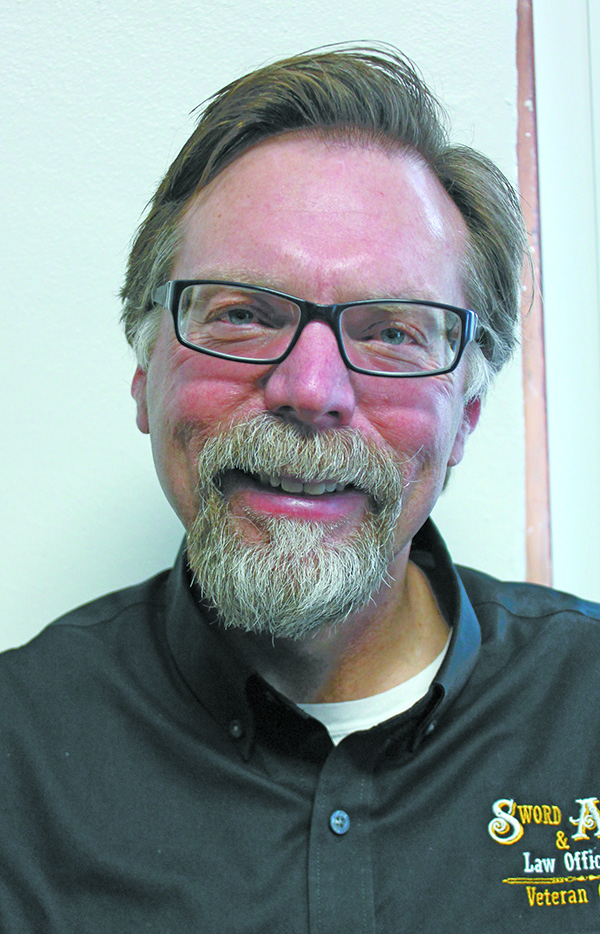 County Commissioner Paul Nabholz was the lone ‘no’ vote with Joe Falkenburg, Joe Allen, Deb Russell and Ann Abbott all voting in favor of Ahrendt.

Ahrendt moved to Hot Springs from Sioux Falls. He attended Washington High School, served in the U.S. Marine Corps, and attended the University of South Dakota in Vermillion. He was majoring in history, but while in graduate school his interest changed, and he entered law school. He opened a sole law practice in Sioux Falls.

“I have a huge interest in music,” Ahrendt said. His interest led him to take some time off from the law and work in the music department at Black Hills Pawn. He plays the guitar and builds guitar amps as a hobby. After a couple years, he returned to Sioux Falls.

“Jim Sword talked me into coming out to Hot Springs,” Ahrendt said. He and Sword had been working together at an office on Jennings Avenue. Now Ahrendt is moving to the courthouse and will no longer be in the office with Sword.

“It was natural to move into the state’s attorney position,” Ahrendt said. “Ultimately everything is important,” he said about his new job.

When asked if he has a certain passion connected with the state’s attorney position, he said that the problems of meth addiction, domestic violence and juvenile crimes are at the top of his concerns.

“We need to get a handle on the drug problem,” Ahrendt said. “I want to do anything I can so the problem doesn’t start in another generation.”

Continuing, Ahrendt said, “Kids will tell you ‘there’s nothing to do,’ so we need to give them more options. We need to be more proactive.”

“We should put our heads together to try to see if there’s anything we can offer to keep the addiction from happening in the first place,” he said. “We also need to give support to those who want to quit the addiction.”

“We should insure that resources are available when people want help,” Ahrendt said. “Sometimes we have to try to force them to get help, even if it means going to jail or prison.”

On the subject of opioid narcotic abuse, he said that Eastern South Dakota is seeing an increase in heroin use. He explained that drugs that were expensive in the past have become cheap to buy. Cartels have made the drugs cheaper, so the expense is not as big of a hurdle for people, he said.

“I’m willing to work with the schools and Boys and Girls Club,” he said. “I would like to see some unique opportunities become available for kids to do.”

“I want us to be proactive at every opportunity and see if there’s something we can do before horrible things happen,” he said.