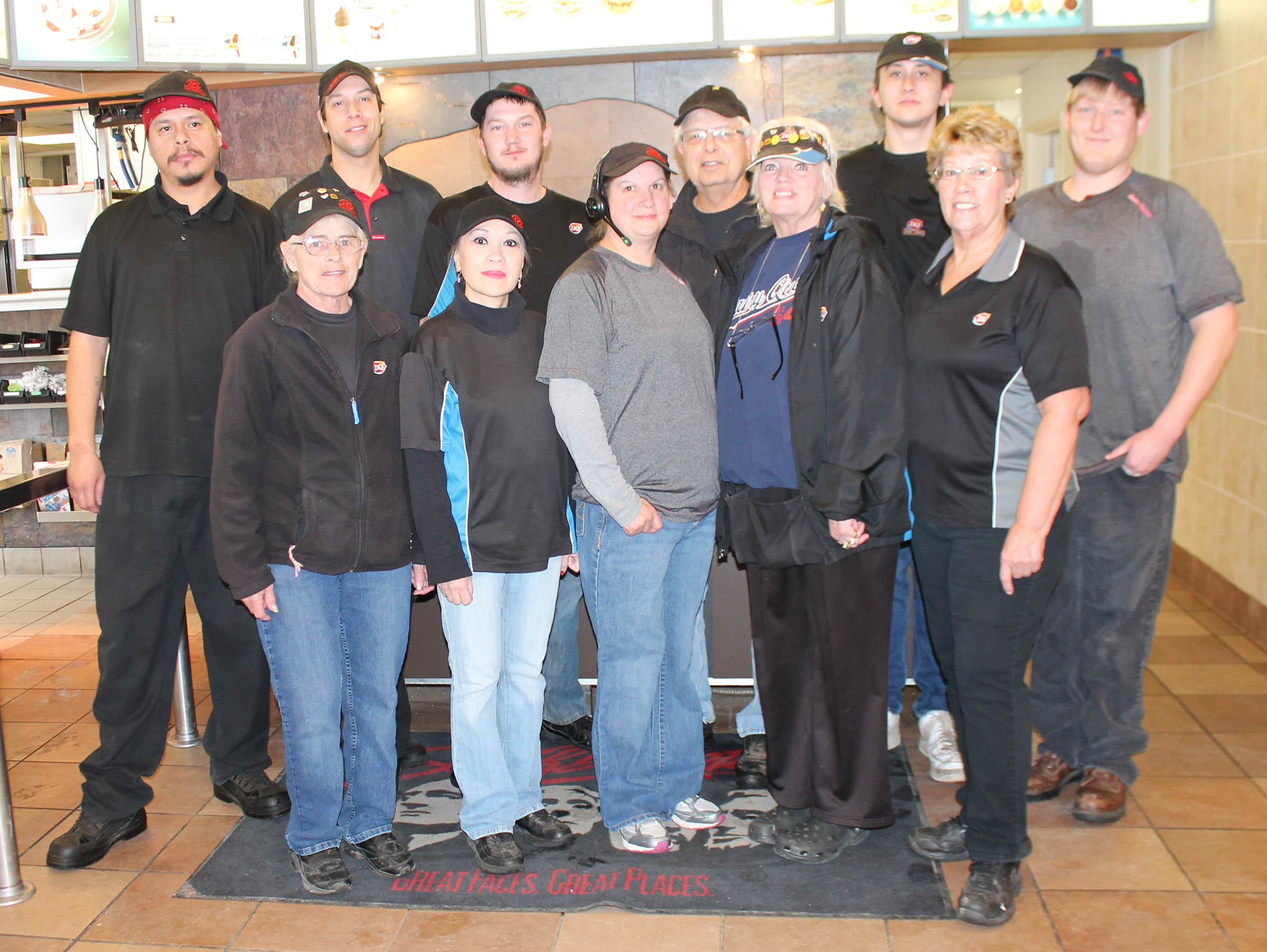 Owners of the Dairy Queen, Tony and Roxanne Brixius, will celebrate their 20th year in business in Hot Springs and have several specials lined up for Valentine’s Day. Here they are shown with some of their employees, front row from left,Rickie Bonnette, Aileen O’Brien, Jen, Terri, and Roxanne. Back row from left are: John, Kyle Brixius, Aaron, Tony Brixius, Gary, and Beau. (Cathy Nelson/Fall River County Herald)

HOT SPRINGS - Tony and Roxanne Brixius, who opened the Dairy Queen in Hot Springs on February 1, 1999, are celebrating 20 years in business this month.

“We love Hot Springs and the area,” Tony said. “It’s home.” Roxanne agreed, saying it was the friendliest town right from the start.

They came to Hot Springs after a tornado destroyed the bar they owned in Minnesota. “We were interested in the Black Hills,” Tony said. When they heard about the Dairy Queen in Hot Springs, they decided it was just what they wanted. Their first Dairy Queen building was located on Sixth Street near the river bridge.

Their daughter, Mackenzie, was in first grade when they moved to Hot Springs. They also have a daughter Casey Jo, and a son, Kyle, who works with them. “Kyle plans to take over,”Tony said. Tony is semi-retired, and Roxanne hopes to retire next year.

The former Dairy Queen building on Sixth Street had been an A&W in the 1960s, then was converted to other restaurants. It became a Dairy Queen in 1991. When the Brixiuses bought the building it needed repair and remodeling, so it took a couple years to realize a profit, they said. At first they could not afford help, so they ran the business by themselves. Tony said he remembers working 100 hours a week.

Their business grew, and they decided to expand. When an architect told them that there wasn’t enough space at the Sixth Street location to do what they wanted, they looked for a larger property. That led them to purchase the current building on Jensen Highway that has more space inside and a larger parking lot. The building was a Hardees for a number of years, then the owner changed it to a Chuckwagon.

“We gutted the entire building,” Roxanne said. When they renovated, they added some special features. The large buffalo on the wall behind the counter that was created by Randy Goddard receives the most comments. “It was the 100th birthday of the bison coming to Custer State Park,” Roxanne said. But, the main reason for the buffalo is because the Hot Springs schools’ mascot is the Bison. Another popular feature they included in their building is a fireplace. “It’s nice in the winter,” Roxanne said.

They closed for two days in May 2013 and moved to the new building on graduation day. “We added Orange Julius when we moved,” Roxanne said. “Everything was new, and we had to learn all over again.” They rely heavily on their son, Kyle, to run the new technology.

The top food seller is the chicken strip basket, and the top ice cream seller is the Blizzard. The Five Buck lunch is popular, too, Roxane said.

Dairy Queen ice cream cakes are in demand for all kinds of special events. Tony makes the cakes, and Roxanne decorates them. They had orders for at least 35 cakes for Valentine’s Day.

They have several employees who have worked at Dairy Queen for years. One of their managers, who is nicknamed “Puffy” has been with them for 18 1/2 years.

“It’s more of a family,” Roxanne said. “The kids go off to college, and then they come back. They thank us for giving them a good work ethic.” They have about 30 employees this time of year, then the number increases to 35 to 40 in the summertime. One couple met while working at the Dairy Queen and ended up getting married.

The Dairy Queen is also an informal tourist information center. “We tell our employees to take time to give our customers directions and help them with hotel information,” Tony said. Roxanne added that directions to Wind Cave are requested the most.

Last year 60 to 65 buses stopped at the Dairy Queen. Tony pointed out that their large parking lot has space for several buses. They have had buses with tourists from England, Japan, Norway, Poland, Australia and more.

They also cater to the local crowd. Regular coffee klatches come in about 2:30 p.m. every day and spend time visiting and enjoying some treats. “They love our employees,” Roxanne said.

The Brixius family has much to celebrate on this 20th anniversary. The Dairy Queen is a well-respected business in Hot Springs with owners who support the local community with friendliness and charitable giving. They donate especially to programs for kids, but also to fundraisers for people with medical issues and for cake auctions.