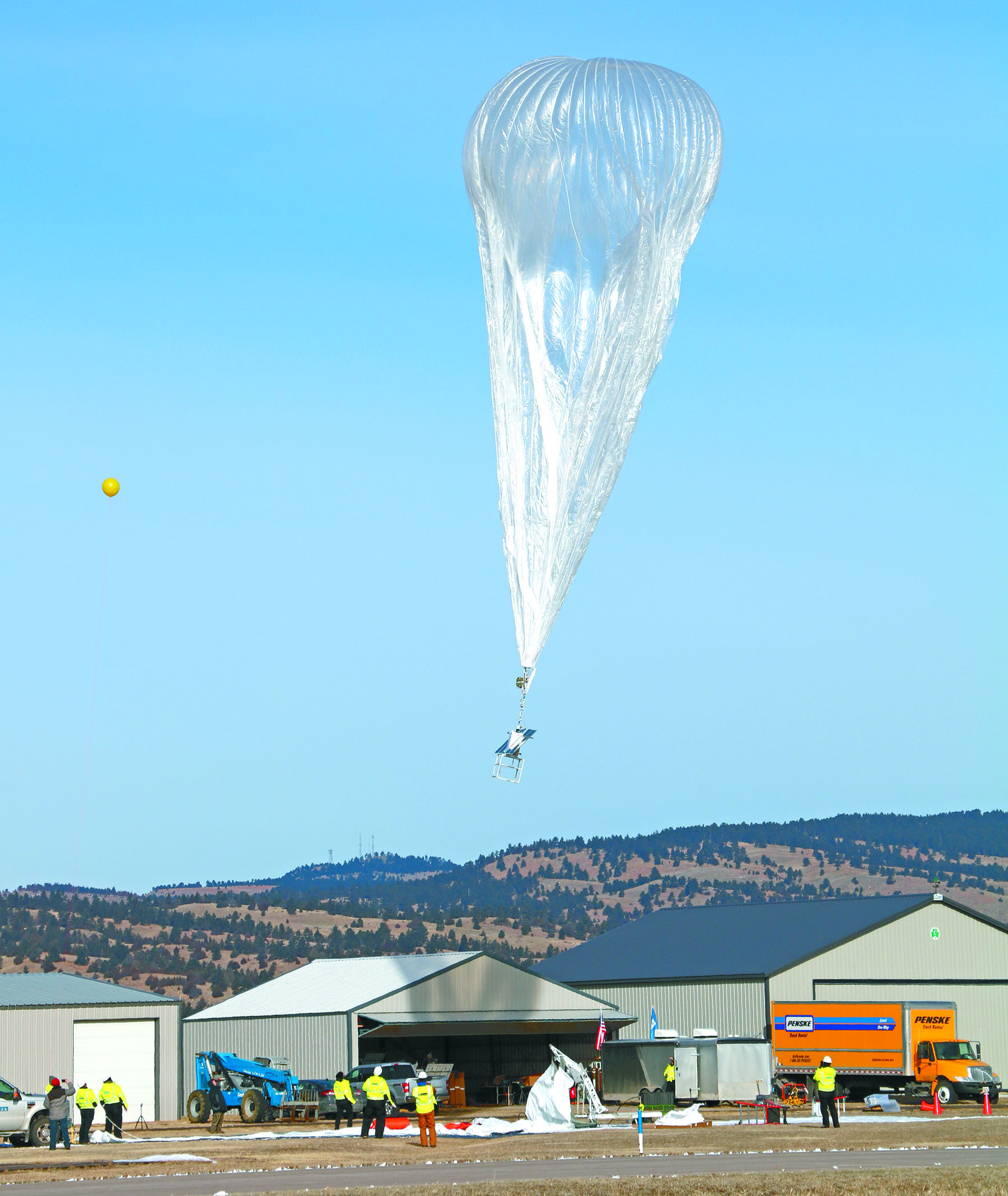 Under a cloudless, sunny blue sky, an unmanned stratospheric balloon system launches from the Hot Springs Municipal Airport last Wednesday morning. The launch was conducted by the South Dakota-based company Raven Aerostar Industries, which has rented an hangar at the airport for a month. (Brett Nachtigall/Fall River County Herald)

HOT SPRINGS – The Hot Springs Municipal Airport has proven to be a true multi-use facility, according to Airport Manager Ed Jensen.

Not only does it host between two and 10 takeoffs and landings of airplanes per day – mostly in the summertime – but it is also home to a wide range of other aviation-related activities including glider flying, skydiving and helicopter fire suppression trainings while also housing a Life Flight airplane as well as a single-engine air tanker (SEAT) for fire suppression throughout the summer months as well.

Over the past few years, the Hot Springs Airport has gained even more attention when it became home to the annual Fall River Hot Air Balloon Festival where nearly 20 big, bright, colorful balloons took flight this past summer, and will do so again this coming August 2019.

Last week, the Hot Springs Airport added another use to its already long list of functions, as it hosted Raven Aerostar Industries and its launching of several large helium balloons, that the Flight Operations Manager on-site described as unmanned stratospheric balloon systems.

Due to proprietary reasons of the company and its clients, the Raven Industry’s representative would not disclose the exact purpose and function of the helium balloon launches being conducted at the Hot Springs Airport but said they had leased a hangar at the local airport for a month. He said they would be doing ongoing launches throughout that time and would be on-site and in Hot Springs for about two full weeks over that timeframe.

Based in Sioux Falls, the company conducts year-round launches of balloons there and at many other sites around the globe. He said they chose the Hot Springs Airport due to its favorable wind and weather conditions for the particular objective of this mission.

He would not speak to any of the specifics of the launches from Hot Springs, nor of the particular specs of the balloons, but directed any inquiries about the company and the launches to their website www.ravenaerostar.com.

“With over 60 years of lighter-than-air innovation and expertise, Raven Aerostar is a world leader in the design, manufacture, integration, and operation of stratospheric balloon platforms and airships for near space applications,” the website stated. “Filling the capability gap between aircraft and satellites, our stratospheric balloon platforms and airships offer critical advantages to a wide range of missions.”

“Our lighter-than-air platforms have helped NASA, Google, the U.S. Air Force, and many other customers achieve and exceed dynamic missions, including communications, data relay, surveillance, intelligence, and more. Partnering with Raven Aerostar guarantees the most advanced and reliable lighter-than-air technologies in the stratospheric market.”

The balloon launching from the airport last week most closely resembled that of their Thunderhead Balloon System which could be described as to look similar to a large jellyfish with its inflated head swimming skyward while its uninflated “tentacles” hung down underneath. Based on video and diagrams on the website, once the balloons reach earth’s stratosphere, the pressure inside the balloon expands the balloon to its full size as it takes on a shape resembling that of a wide pumpkin. The stratosphere layer of earth’s atmosphere begins at 6.2 miles (or 33,000 feet) and extends upward to 31 miles (or 165,000 feet) above the ground.

As witnessed by those on the ground during the launch, attached at the bottom of the balloon was a sizable payload, which the Raven Industries spokesman said varies for each launch depending on the mission objective.

“With Thunderhead Balloon Systems, controlled flight and long duration capabilities can be planned and executed at a fraction of the cost and time of traditional stratospheric platforms.

“Thunderhead Balloon Systems can be flown in constellations or individually to support a wide range of mission requirements. Affording users land-based and maritime launch platforms, applications are dynamic and diverse.”

The Flight Operations Manager onsite in Hot Springs last week said that Raven Aerostar is a design partner of Google for their Project Loon, which is a global effort to bring internet access to remote areas of the world by launching a series balloons to aid in communications.

According to information on Googles website, “Project Loon balloons float in the stratosphere, twice as high as airplanes and the weather. In the stratosphere, there are many layers of wind, and each layer of wind varies in direction and speed. Loon balloons go where they’re needed by rising or descending into a layer of wind blowing in the desired direction of travel. By partnering with Telecommunications companies to share cellular spectrum we’ve enabled people to connect to the balloon network directly from their phones and other LTE-enabled devices. The signal is then passed across the balloon network and back down to the global Internet on Earth.”

Google’s website also said that Project Loon began in June 2013 with an experimental pilot in New Zealand, where a small group of Project Loon pioneers tested Loon technology. “The results of the pilot test, as well as subsequent tests in New Zealand, California’s Central Valley and in Northeast Brazil, are being used to improve the technology in preparation for the next stages of the project.”