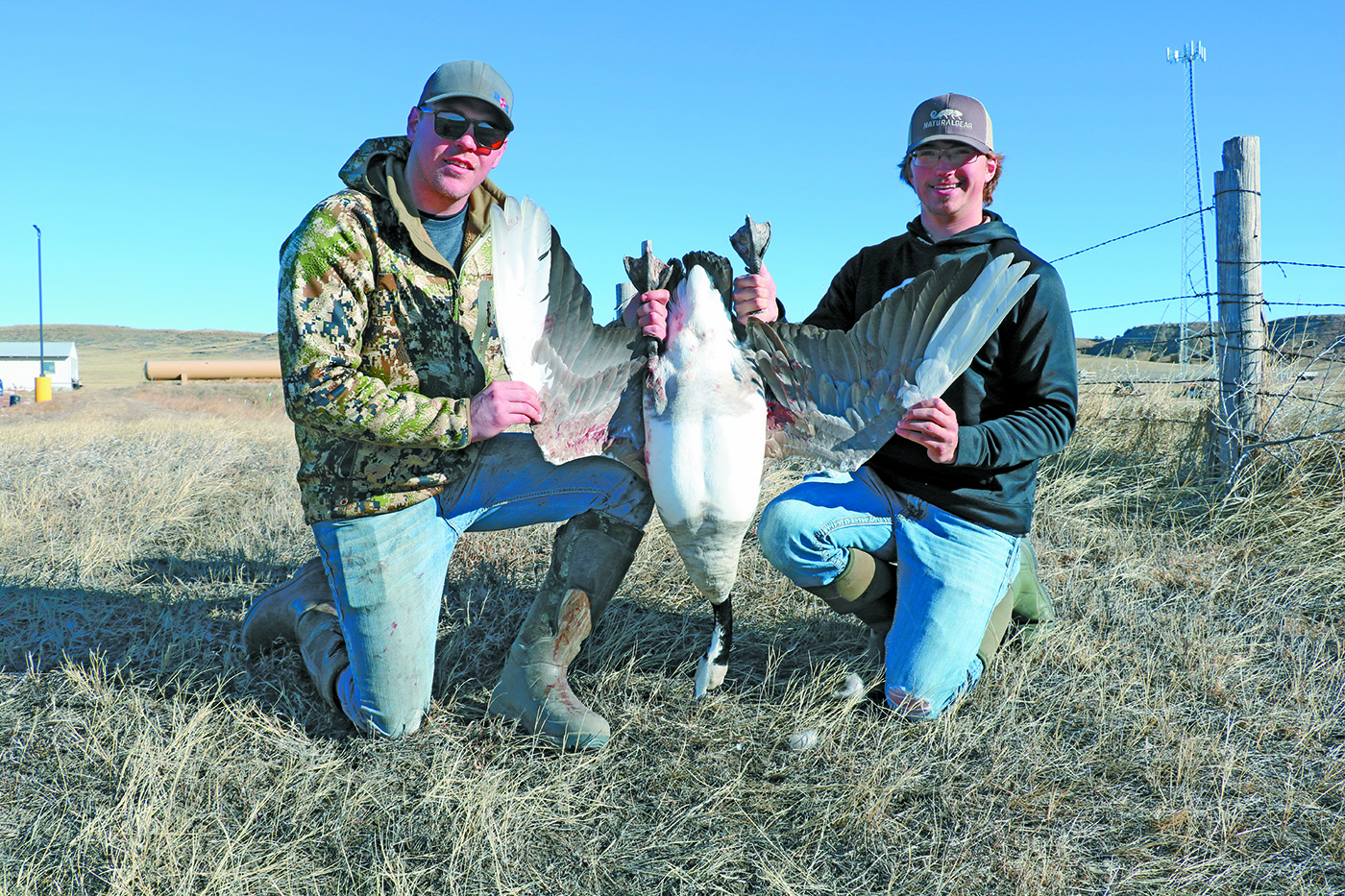 HOT SPRINGS – For everyone who hunts, or who is in pursuit of some kind of elusive quarry or find, there is often a very specific trophy that serves as a motivating factor and would be considered the ultimate prize.

For deer hunters, it may be a majestic drop-tine buck or some other buck with a non-typical arrangement of antler points. For rockhounds, it may be finding matching halves a fist-sized agate.

But for goose hunters, according to a pair of hardcore waterfowlers from Rapid City, its the “mythical” Quill Lake Goose.

And last week in Fall River County, near Oral by the Cheyenne River, those same two goose hunters had their dreams come true when they harvested what is considered an ideal representation of a “Quill.”

Cody Brockhouse, age 20, and his longtime hunting buddy Brandon Woodhead, age 23, have each been hunting many types of game animals most of their lives. But their passion is goose hunting, with each owning several hundred of their own decoys and a trailer full of other equipment and blinds. They’ve traveled throughout the Midwest hunting geese and have estimated being a part of harvesting around 1,500 geese together over the past few years, all the while in search of a “Quill” to have proudly mounted on their wall.

According to a post on the Minnesota Waterfowler website, so-called Quill Lake geese are Canadian Geese which exhibit a form of leucism, which is a condition characterized by reduced pigmentation in animals.

“Unlike albinism, it is caused by a reduction in all types of skin pigment, not just melanin,” the post on the website stated. “Leucism is a general term for the phenotype resulting from defects in pigment cell differentiation and/or migration from the neural crest to skin, hair or feathers during development. This results in either the entire surface (if all pigment cells fail to develop) or patches of body surface (if only a subset are defective) having a lack of cells capable of making pigment.”

Brockhouse said in geese, this form of leucism is usually exhibited by white wings, white bellies and pink or lighter colored splotches on their webfeet.

A similar condition that sometimes shows up in deer or elk is known as piebaldism, where the animals fur exhibits unusual white markings.

Geese exhibiting this rare genetic malformation were labeled with the name of a  “Quill Lake Goose” because the rare coloration pattern was first discovered and studied in a population of Canadian Geese near the Quill Lake region of Saskatchewan, Canada. This wetland complex makes up Canada’s largest saline lake and was named for bird quills that were at one time collected near its shorelines and shipped to England for use as quill pens.

While luck certainly plays a large role in being able to harvest an unusual goose like this, strategy and persistence is also very key.

Brockhouse and Woodhead described Quill Lake Geese as “myths” and something very few goose hunters get they chance to see, let alone have an opportunity to harvest. They however had been seeing a couple Quill Lake Geese over the past few days while hunting in Fall River County. The particular one they harvested last Tuesday morning was part of a flock that was on the ground a few hundred yards away. Woodhead said they spotted the unmistakeable white flashing of its wings as stood feeding with the other geese in the flock.

“When I saw this one, I got so excited, I started shaking,” said an ecstatic Brockhouse as he described the morning’s hunt last Tuesday, a few hours after it happened.

Knowing there was one in the area, they set up early Tuesday with about 20 dozen decoys and in ground blinds in a field where they felt the geese would most likely want to be feeding. After the spotting the Quill on the ground, but well outside shotgun shooting range, the goal then was in trying to get the flock to get up from its current location and fly towards them and into their set up.

Woodhead said they used a technique known as “flagging” where they mimic the sound and look of a geese landing by flapping a piece of wing-shaped nylon secured to a shaft.

In this case, the look of geese landing amongst a large flock of geese was enough to convince nearby “Quill” and his goose buddies to check it out as they took to the air and made their way over to excited pair of hunters.

Brockhouse said the flock circled around and began to set their wings as they banked his direction, which is when he squeezed the trigger on his shotgun. The sight of his first-ever, mythical Quill Lake Goose falling to the ground soon afterwards is something he will not soon forget, which is also a memory that he plans to get forever preserved with a mount for his wall.

Brandon Woodhead, left, and Cody Brockhouse, both of Rapid City, recently harvested a rare “Quill Lake Goose” while hunting in Fall River County. The prized goose is considered a trophy by many goose hunters due to its unusual feather markings. See page A8 for more photos comparing it to normal Canadian Geese.