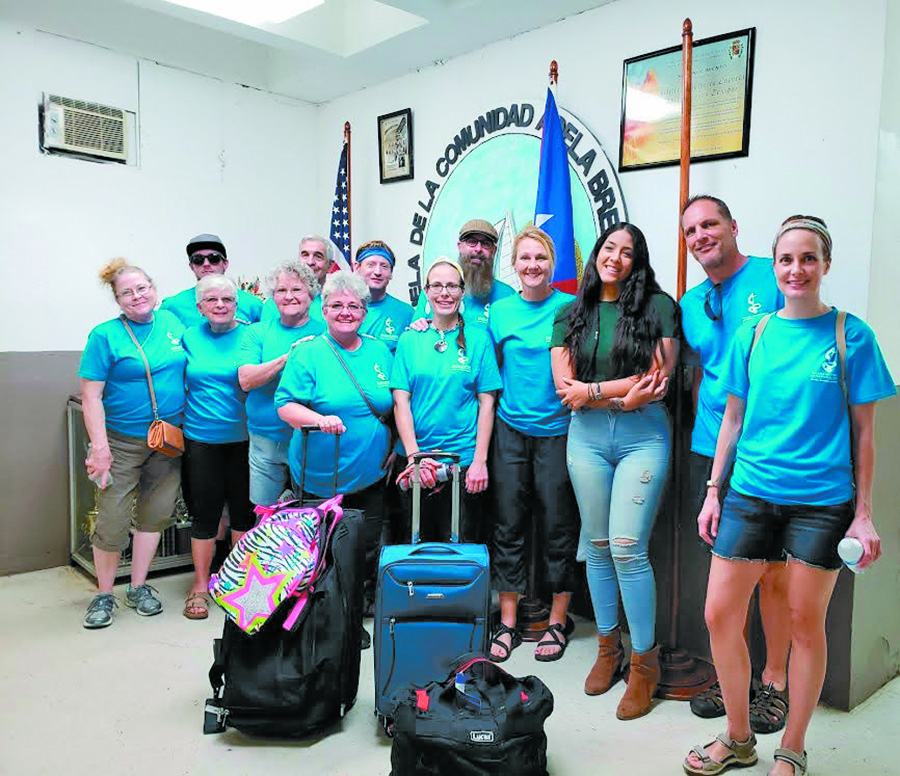 HOT SPRINGS - Peggy Warner-Pallos of Oelrichs was able to cross off an item on her bucket list recently when she helped reconstruct a home in Puerto Rico that had been destroyed during Hurricane Maria in September 2017. She and ten others from South Dakota and one from North Dakota traveled to San Juan in November 2018 to help rebuild two homes that were destroyed in one of the worst hurricanes in history to hit Puerto Rico.

Warner-Pallos said her bucket list included participating in a mission and visiting Puerto Rico, “I could fulfill both items at the same time,” she said. On a reflective note, she said, “Puerto Rico is part of the United States, but we have forgotten about that.”

The team left from Rapid City Regional Airport on November 24, however, adverse weather and mechanical difficulty created a flight delay, which caused them to miss their flight to San Juan from Dallas/Forth Worth that day. They then flew to Chicago, where they spent the night and caught a flight the next day that took them to their destination. The team members were hosted for the week at Iglesias Methodist Los Angeles United Methodist Church, which has a retreat center setup.

On the first evening they did a little sightseeing in Old San Juan and walked the trails at the San Juan National Historic Site. They also met their interpreter Stephanie, who was with them all week.

“We all grew very close to Stephanie as she shared her testimony and shared stories about Hurricane Maria,” Ruth Pourier said. “She lost her job, her home and her car during Maria and had to move home with her parents.”

On Monday morning the team met with a civil engineer, who is with the United Methodist Committee on Relief (UMCOR), and project managers. The group was divided into two teams and given assignments at homes in Carolina-Los Angeles, a suburb of San Juan. A project foreman led one of the teams as they constructed 22 trusses for the structural system of the roof of one house. The other group started reconstruction of a home owned by a couple in their 80s. They built exterior and interior walls, installed exterior siding and windows.

“We started out with a bare floor on pilings, and in three days we built walls, windows and joists,” Warner-Pallos said. “The husband of the couple, whose house it was, had tears that fell down his face, and he kept saying ‘I am going to have a house, I am going to have a house.’” He looked forward to putting flowering pots on his new patio, she said.

The two teams worked about six to seven hours a day in 89-degree weather with 75 percent humidity. “The foremen kept reminding us that those were winter temperatures, and so we shared with him about our South Dakota winters,” Pourier said.

One afternoon after work they had time to go to the beach and swim or wade in the waters of the Caribbean. Each evening they reported on their progress and shared in Bible studies. One evening they attended a church service that was entirely in Spanish and included upbeat singing. “Although most of our group couldn’t speak Spanish, it seemed that we could sing in Spanish because the words were projected on a screen,” Pourier said.

At the work sites, the project leaders were patient in teaching new skills to the team members. “At each site we left messages in the walls or on the trusses,” she said. “We wrote Bible verses and ‘God Bless This Home’ or ‘Made With Love’ along with our names and states.”

The teams met a number of local people who had been affected by the hurricane. “They were such thankful people,” Pourier said. “They worked hard each day to try to make Puerto Rico a better place for all who live there.”

By Friday the team had accomplished the project goals, so they were given the day off. They traveled by van to a coffee farm in rural Puerto Rico and then to a middle/high school where they dropped off school supplies that they had brought with them. They enjoyed lunch on the beach, then drove to Guyama, where they handed out sandwiches, chips and cold water to the needy in the City Park. Their last stop was at a river and a waterfall. On their way home they were lost in a detour but ended up at the highest point in San Juan. Finding their way back to their retreat center, they were greeted by a baby iguana in their room. “That got everyone excited,” Pourier said.

On Saturday, Dec. 1 they headed back home to South Dakota.

“There were rewards unending,” Warner-Pallos said. “The people on the island were so joyful, and so welcoming, and so thankful. We grew spiritually and emotionally in the time we were there.”

Anyone interested in hearing more about the trip or seeing the photos, please contact Pastor Mark Johnsen at Prairie View United Methodist Church.