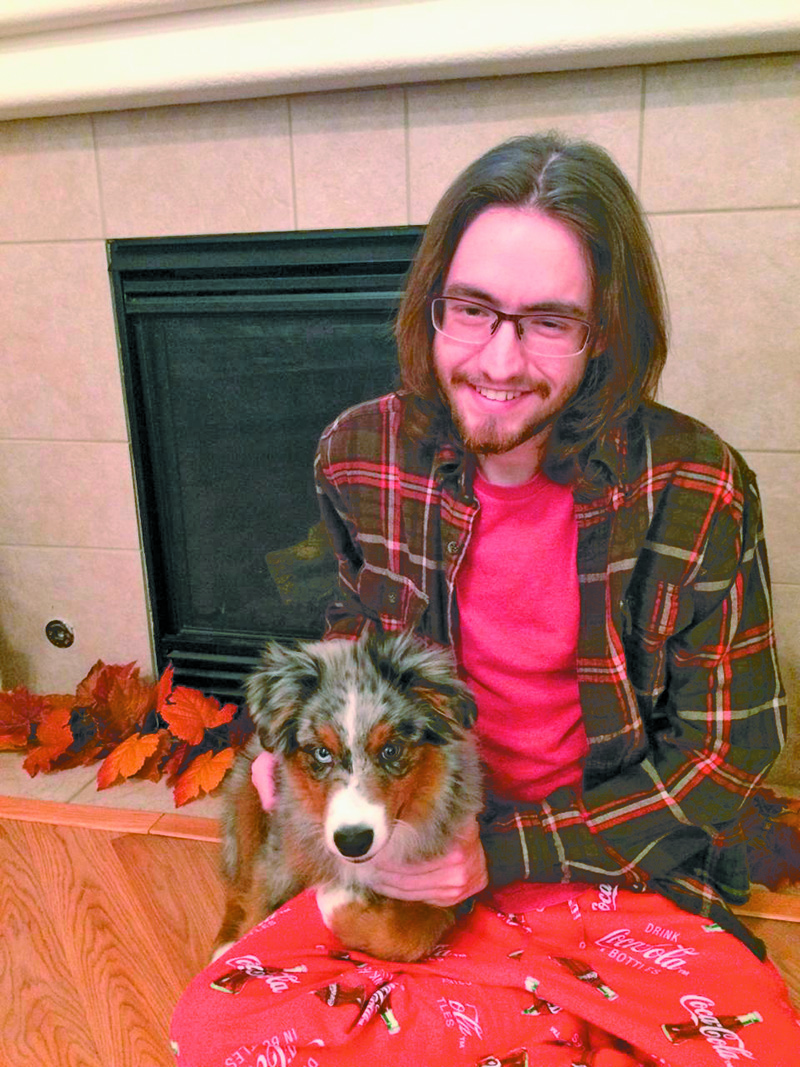 EDGEMONT – For 23-year-old Tyrel Tanner, 45 percent lung function is a vast improvement, especially when he was breathing at about 15 percent lung function before his double lung transplant on Oct. 15. He has dealt with Cystic Fibrosis, a genetic disease that clouds the lungs with mucus, making it hard to breathe and perform simple tasks. It can also affect the pancreas and liver, and also cause diabetes, none of which has affected Tyrel.

“You can just see, week to week, how much he improves,” his mother Richelle Tanner said. “They expect that to go up. This first year, it just slowly goes up, but he’s already doing so much more than he could do before the transplant. I’m looking forward to taking him home and getting his life back again.”

Richelle is currently Tyrel’s roommate, as well as a Mini Australian Shepherd named Zeke, which was recommended by Tyrel’s physical therapist to encourage walking and getting out. They are staying at a transplant living center near University of Colorado Hospital where he received the transplant, and still checks in weekly with his doctor and completes physical therapy twice per week. He stayed in the hospital for a month after the transplant.

“My brother-in-law said that kid is the bravest man I have ever met,” Tyrel’s grandmother Pat Rice said. “To agree to go into this type of surgery, he’s just so cheerful. When he woke up, he said, ‘Mom, I can breathe!’ That’s the first he’s been able to for years. He’s just doing really well.”

Since his transplant, he has had one scare with a lung collapsing, in which he returned to the hospital for a short time, but he has returned to the housing. Tyrel is supposed to avoid public areas for three months, then wear a mask in public and carry lots of hand sanitizer.

“I shouldn’t have any other issues than infection or rejection,” he said, “and the chances of that go down over time.”

Tyrel is working hard to be able to return home for Christmas, and in the long term, he hopes to return to school at Western Dakota Tech in Rapid City, to receive his AutoCAD associates degree. He is an avid fisherman and hunter, and enjoyed sports before his CF limited activities around the age of 15. His lung function greatly decreased this fall, and he was in the hospital when he heard the news of his double lung transplant.

“I hadn’t really believed that was going to happen anytime soon,” he said. “I was shocked.”

“We couldn’t do this without their great help,” Richelle said. “They’re doing an awesome job at both flower shops.”

Children’s Organ Transplant Association has helped cover some medical bills and related costs, donations are welcome. To contribute to Tyrel’s COTA fund, in which all donations go to Tyrel, visit www.cota.org/campaigns/cotaforteamtyrel/blog/our-story.

Giving Thanks to the Tanner Family is slated for Saturday, Nov. 10 at St. James Parish Center at 306 Third Ave. in Edgemont.

“Our annual dinner is called the Giving Thanks Dinner & Dance so this year we have changed it slightly to Giving Thanks to the Tanner Family. I think you would be hard pressed to find anyone in Edgemont who has not been touched by the Tanner family,” said Kelsey Babb, the Edgemont YMCA Director. “I am very excited to be a part of this! Being new to Edgemont, I have loved to see the community come together.”

A free-will donation baked potato dinner will be served from 5 to 7 p.m. and a dance with music donated by The Stacy Block Band will follow. Silent auction items will offset the Tanner family’s remaining costs, such as the condo that runs about $3,000 per month, fuel bills, and food expenses. The event is organized by the St. James Catholic Church, the Edgemont YMCA, and the Edgemont Chamber of Commerce.

“We’re very, very grateful,” Richelle said. “We live in a great community; there are wonderful people who live in Edgemont.”

• Load of cattle hauled up to 100 miles from Edgemont, donated by Trotter Trucking

Mama’s Day Off – Six hours of organizing or house cleaning within 50 miles of Edgemont, donated by Melody Printz

Baskets for the basket raffle include: