Donald D. Jensen, 92, passed away at home, in Alamo, TX, Sunday, January 21, 2018.  Don was born April 11, 1925, in Verdel, NE, the son of Edgar and Verna (Hansen) Jensen. He was baptized at Rosenberg Lutheran Church and confirmed at Bethany Lutheran Church.  Don attended country school near Lindsay, NE and was active in 4-H where he showed grand champion steers two year in a row in 1939 and 1940 at Platte county, Nebraska. He graduated from Newman Grove High School in 1942.

Don attended the University of Nebraska for one year, enlisted in the US Navy, and continued his education  at NW Missouri State University through the Naval V-12 program.  Don was on active duty from 1943 - 1946, where he was in the twelfth week PT Boat training when World War II abruptly ended. He then served on LST 987 (landing craft) in charge of the engine room. 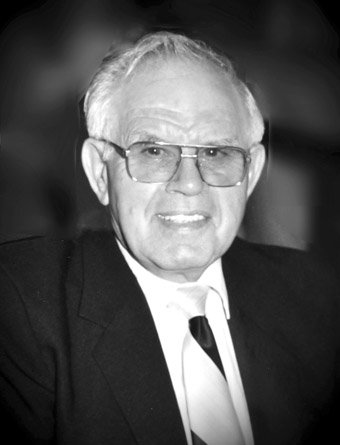 Upon discharge from the Navy in 1946, Don resumed his education at the University of Nebraska receiving a degree in animal husbandry in 1948.  While there, Don was on the livestock judging team which traveled throughout the Midwest and was a member of Farmhouse Fraternity.  Upon graduation, Don served as Assistant County Agent in Cuming and Lancaster counties, Nebraska.

December 7,1949.  In 1951, Don received his certificate of auctioneering from Reppert School of Auctioneering, Decatur, IN.  He worked as an auctioneer at the Norfolk, NE, Livestock Market and taught a Veteran’s “On the Farm” training course in Meadow Grove, NE.

While at Edgemont, Don was appointed to fill the state legislature position for Eddie Clay who was running for Lt. Governor.   Don and Delores also traveled the United States in their RV from 1971- 2006.  Don and Delores moved to Black Hawk, SD in 1984 and also maintained a residence at Alamo Palms in Alamo, TX.

In 1993, Don volunteered for the program “Volunteer for Cooperative Assistance”, VOCA, as an agricultural consultant.  VOCA sent he and Delores on assignment to Ukraine and Ecuador because of interest in the auction market system.

Don was an avid Bridge player and achieved Ruby Life Master status.  Both Don and Delores were ACBL accredited bridge teachers, and Delores was a certified ACBL Bridge Director.  In the 1990’s, while running four Bridge games per week in the Rio Grande Valley, in Texas, Don and Delores also ran bridge games for seven different cruise lines.

Don was a second baseman on several  local baseball teams in the late 1940’s, 1950’s and early 1960’s.  He was known as a pretty fair hitter.  He loved horses, of which Buck, Peaches and Blaze were expert “ring” and “alley” horses at the livestock markets.  He trained (with Carl Frisch) several teams of horses to be parade horses which he took to community celebration parades throughout Nebraska in the 1960’s.

While at Alamo Palms, Don was program chairman from 1988 to 2004, procuring entertainment for the park’s Sunday evening programs.  He also was a booking agent for many entertainment groups including the “Jack Jensen Show”, “Ted Jordan Show” and others.  He also helped organize and serve as president of the Rio Grande Valley Program Chair Association for many years.

Don served on Jaycee boards, serving as president.  He served on school boards and was a member of the Nebraska American Legion Post and VFW in South Dakota and Texas.

Donald Dale Jensen is survived by his wife of 68 years, Delores, one son, Jon (Jack) and daughter-in-law, Debra,

The family of Don Jensen would like to thank the IPH Hospice Administration.  Special Thank You to Jessica Franks and her staff, Sandra, Diana, Myrna, Ida,  Eva, Maricela and Leanna for their loving care.  A very grateful Thank You to Jan and Mike Thompson whose dedication allowed Don to remain at home.  Thank you to Dolly Morales and so many others who brought meals and visited. Thank You to Chaplain Adan R. Cazarez, Th.M., BCCC, CFHPC.

A Memorial Service is pending but will probably be around the 21st of June at Black Hills National Cemetery, SD.  Memorial donations are requested to be sent to the Verdigre Fire and Rescue Unit, Verdigre, NE 68783.