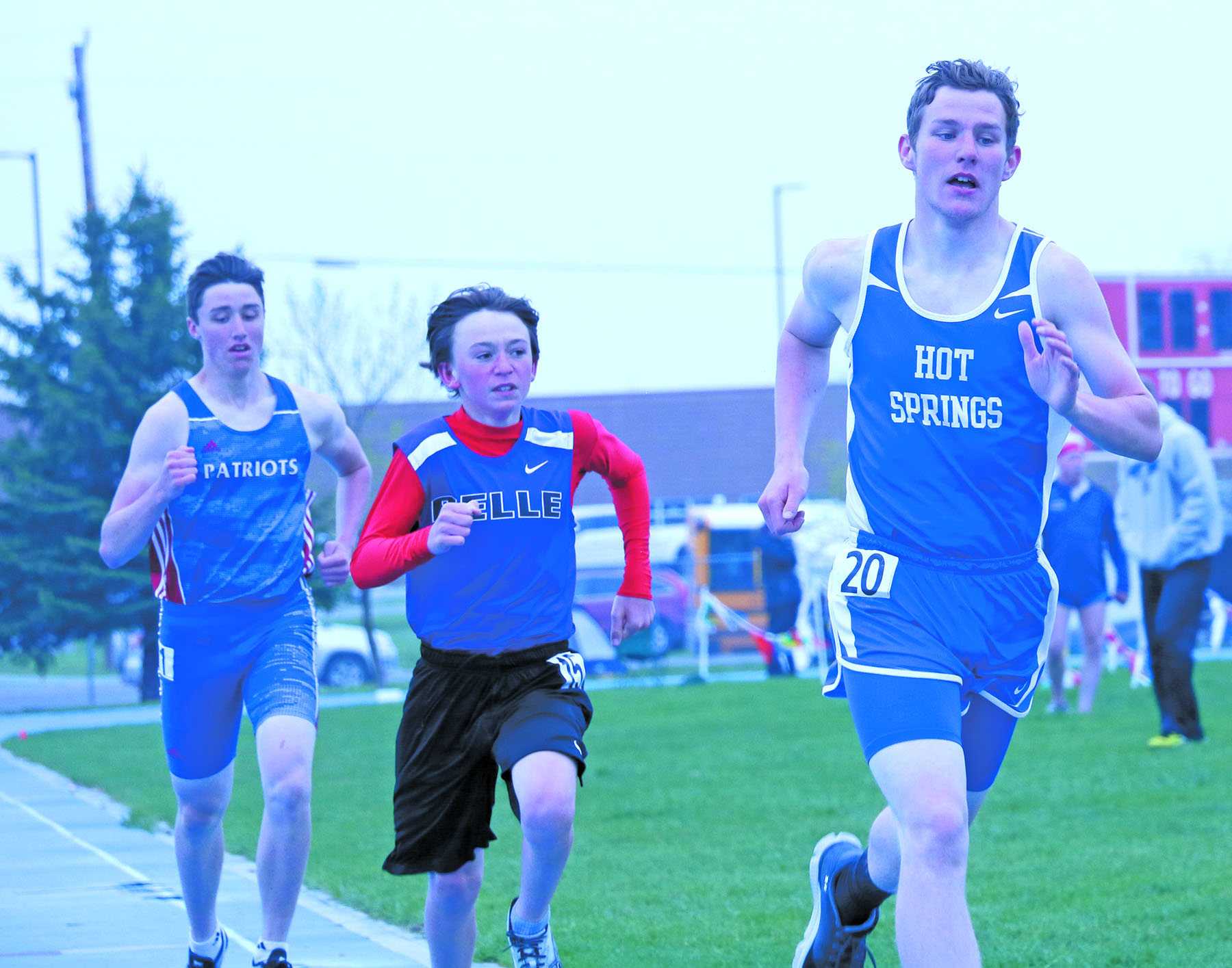 Competing in two meets in a week is nothing new for the Hot Springs track team and it is not unusual to compete in completely different weather situations as well.

Last Tuesday, the Bison traveled to Rapid City to compete in the qualifier and the conditions could not have been better. The throwers had another fine day in the rings as Marcus Harkless finished 4th overall in the discus with his best toss of the season, 121-03. Marcus has done an outstanding job this season under the direction of Jim Hayes. Caden Shanklin placed in both events finishing 8th in the discus (107-00), and 7th in the shot with a toss of 38-06. Garret Heil placed 5th in the shot (34-9), and Caleb Maciejewski placed 6th (39-03). McKenzie Cope placed in both throwing events placing 4th in the shot (32-06), and 7th in the discus (99-09).

Thomas Massa, the work horse for the team, ran a PR in the open 400m, finishing the race in 56.35 and placing 7th overall. Thomas has really come on as he reaches for a trip to state. He has the work ethic and attitude that every coach wants from their athletes. Thomas also helped out the 4x800m team to a first place finish (9:01). Josh Stanley, Adam Consoer and Tyler Winscot were the other members of this team.

Adam also competed in the 1600m open and finished with a PR run of 5:06 and a 7th place finish. Tyler Winscot then helped the 4x200m relay team to a 6th place finish with a time of 1:43. Gavin Heil, Oliver Juhl and Josh Stanley were the other runners competing in this event. Our best time this year is 1:42, and we could have bettered that time if not for a shaky handoff. But these four kids, despite the error, ran their tails off. If we had a clean exchange, we would have been below the 1:40 mark. Josh Stanley turned in his best race in the 800m open, placing 2nd in a time of 2:05, just missing the qualifying mark by 0.4 seconds.

Give it 5 minutes or 3 days and the weather will change, and so it did last Friday at Douglas. Cold and rain was the consistent variable of the day. We did not have our best day but came away with some pretty good performances.

Matt Norton placed 7th in the long jump with a distance of 18-10. Matt has a good shot at getting to the state meet this year. Garret Heil and Caden Shanklin placed in the Shot event, with Garret placing 4th (38-07) and Caden finishing in the 7th spot with a toss of 36-07.

Josie Haden also placed in the discus (7th, 86-11). Our last placer of the day was Adam Consoer, who placed 8th in the open 1600m race, finishing in a time of 4:58. This was Adam’s best run in the 1600m, and this was his 2nd PR this week. Adam really had fight his way through a crowd to finish were he did, expending a ton of energy doing so, but still had enough fight left in him to finish were he did.

Our next meet will be this Thursday in Belle Fourche. The region meet is our last opportunity to qualify for the state meet, so hopefully with a good week of practice and some attitude tweaks we should qualify some athletes for the state meet to be held in Spearfish and Rapid City.