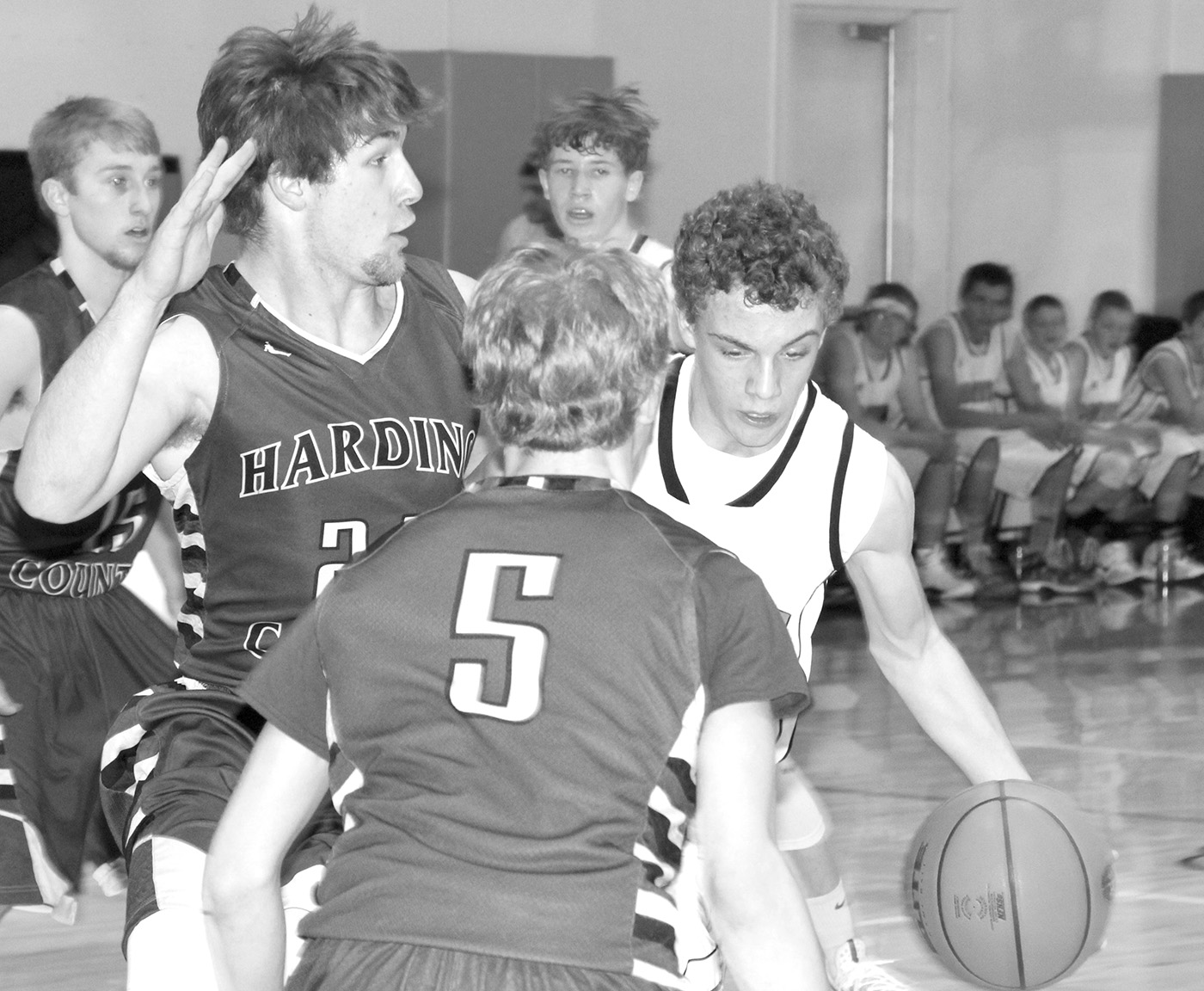 EDGEMONT – The Edgemont Mogul boys' basketball team made it two wins in a row over Hay Springs as they handled the Hawks again, this time at home in the Mogul Dome last Thursday, Feb. 1 by a score of 54-48. Edgemont had also beaten Hay Springs on the road the week prior by a score of 56-47.

“We handled the ball and shot well from the floor, especially beyond the arc,” said Edgemont head coach Joe Martin. “The kids drove aggressively and found open teammates with great passes to handle.”

Junior Dalton Reutter lit it up from three-point land as he was 6-for-6 with the long ball for a game high 18 points, while also tying for the team lead with nine rebounds. Teammate Caleb Simons also had nine rebounds while also scoring 16 points while shooting 50 percent from the field (7 for 14). Three other Moguls also contributed on offense as Kaleb Darrow and Ryan Simons scored seven points followed by Corey Andrie with six.

“Getting production from everybody is fun to watch,” Coach Martin said. “I see how hard each works in the summer and in practice, and when they have a night like this in front of their friends and family it makes basketball fun.”

“The boys were solid on the defensive boards and a collective effort holding the Hawks to under 50 points, including big steals and forced turnovers throughout a close game,” added Coach Martin. “Free throw shooting, especially down the stretch, needed to be better but the boys got every rebound and loose ball in the crucial final moments of the game securing the victory.”

Also last week, the Moguls traveled to Moorcroft, Wyo., on Saturday, where the varsity lost by a score of 47-60, even though they took an early 17-14 lead in the first quarter and were up 32-31 advantage at the half.

“Despite a season low nine turnovers, we couldn’t get enough baskets to fall,” Coach Martin said. “Our shot selection is smart; we need to convert more opportunities into points.”

Caleb Simons led the way for Edgemont with 25 points and 10 rebounds, despite shooting only 4-for-15 from the foul line. Kaleb Darrow scored 14 points but also struggled with free throws, making one of his four attempts. Grant Darrow scored four points, Ryan Simons three and Corey Andrie one.

“We have good free throw shooters, kids that have won games at the line, but tonight we couldn’t capitalize, especially in the second half,” Coach Martin said. “We will shoot better in the future, we work too hard there not too.”

Dalton Reutter had a good defensive night with five steals and also grabbing three defensive boards. Ryan Simmons had a total of eight rebounds, including four on defense, as well as four deflections.

“We played aggressive defense and left ourselves exposed in the middle, however, we seemed to be deflecting balls and running all night. We give the Wolves a lot of credit for coming out and seizing control of the game at home in the fourth quarter,” Martin added.

Despite the varsity loss, the Edgemont JV did pick up a win over Moorcroft by a score of 23-19. Corey Andrie led with 12 points, followed by Grant Darrow with eight and Clay Englebert with three.

This week, Edgemont (4-11 season record) hosts a pair of games, with Hulett, Wyo., on Thursday and then Guernsey-Sunrise, Wyo., on Saturday.

During a game played earlier this season versus Harding County, Edgemont junior Dalton Reutter dribbles the ball upcourt while being heavily defended by a pair of Ranchers.