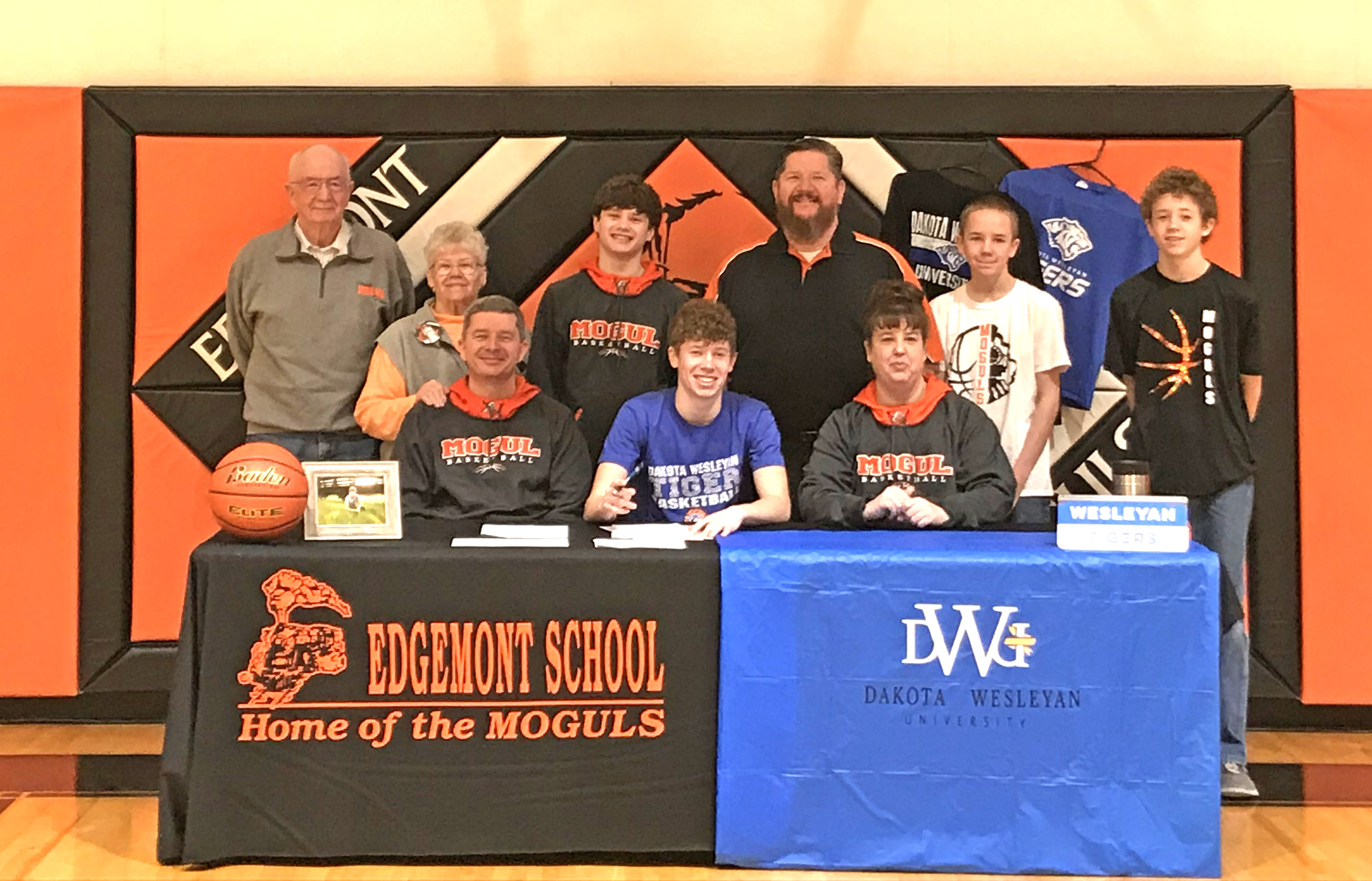 This past season, Darrow helped lead the Edgemont Moguls boys’ basketball team to one of their best seasons in recent history by winning 10 games for the first time in 25 years.

At his signing ceremony Head Coach Joe Martin said to Kaleb, “To go to Dakota Wesleyan you have to have good grades. Congratulations. I’ve seen you put in the work. I speak highly of you and look forward to watching you in the future.”

Darrow said he chose DWU because he really liked the basketball program when he went and visited the school. Also stating, “They have the Wildlife Management career I want to go into. Everything there just felt at home really.”

“One of the things that Kaleb does well on and off the basketball court is he’s got really good grades,” said Activities Director/Dean of Students Lane Ostenson. “He’s gonna go on to Dakota Wesleyan and represent Edgemont really well in the future.” Also adding, “The reason we do the signing is to let students know that even though you’re from Edgemont you can anywhere from here. I think that’s an important message to pass on.”

George Darrow, Kaleb’s grandfather who was present at the signing said, “We are really really proud of him. He’s worked really hard through school to earn these honors.”

Darrow started playing sports at age six. He played five years of YMCA soccer, participated in AAU wrestling from age 8-11. Finishing his wrestling career with a winning record of 53-41. In junior high he participated in four years of football and basketball along with two years of track. During 6th-8th grade he scored 149 points in basketball. During 8th grade football his team went 7-1. The only loss was to Hot Springs by 1 point.

Kaleb went on to play six years of high school basketball for Edgemont. He was Varsity team captain and lettered all four years of his high school career. He played three years of football. He has lettered in three years of track and said he is looking forward to this year and hoping to break a 35 year old record in the two-mile.

In addition to his athletic accomplishments, Darrow is also an accomplished student. A four year member of the National Honor Society finishing every semester with a 3.5 or higher GPA. He has also been involved in band and drama for four years. Student Council Vice President two years, choir for two year and was a member of Boys State in 2018. He was also named to the Academic All-State Team for football and basketball.

At the Chadron State Scholastic Contest, he received first in Algebra in 2016, first in Geometry in 2018, third in Chemistry in 2018. He also came in 5th for the West River Math Contest at SDSM&T in 2018, was part of the West River Basketball All-Tournament Team for three years, was a Panhandle Athletic Conference Honorable Mention for basketball in 2016, as well as First Team in 2017.