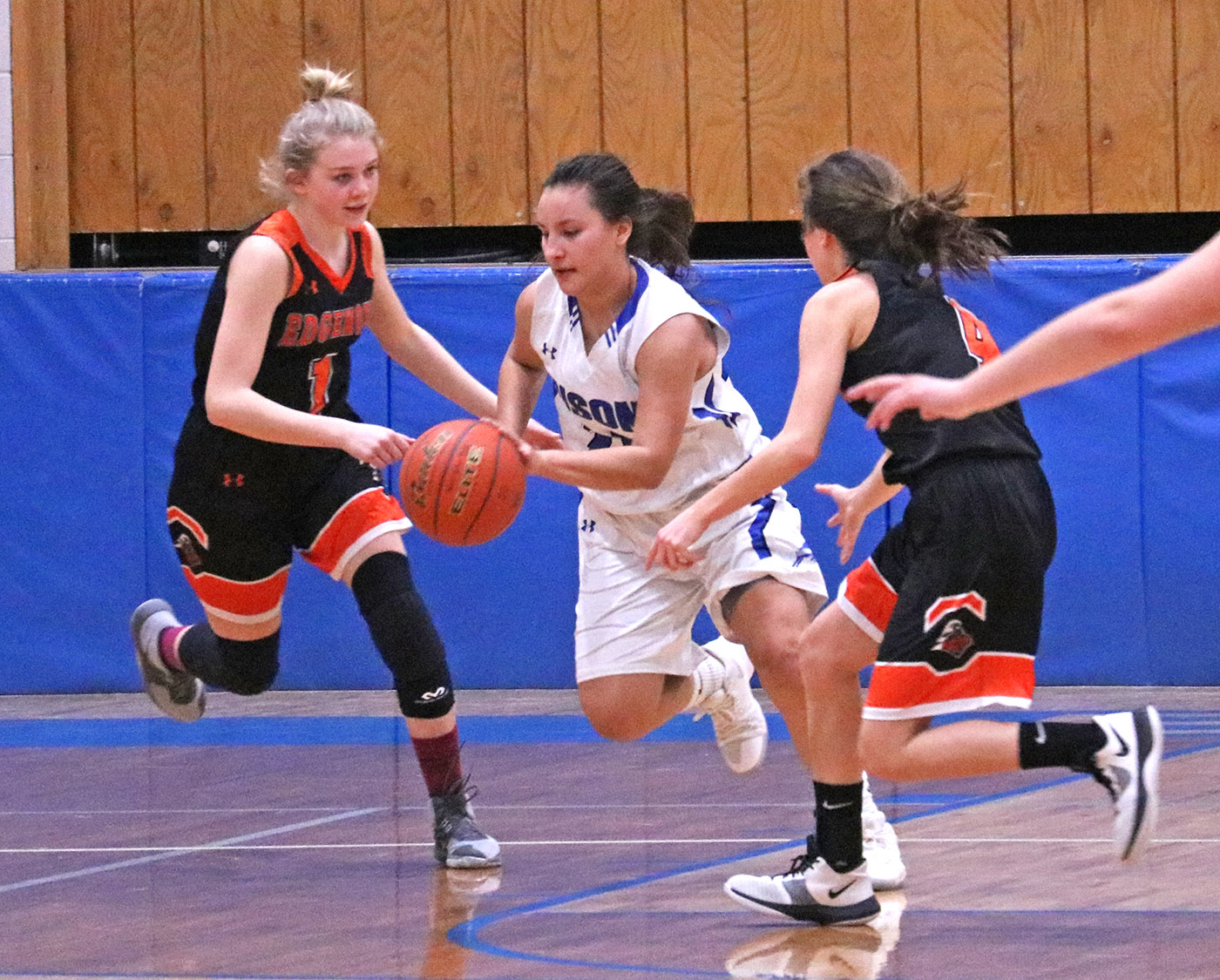 HOT SPRINGS – The Edgemont and Hot Springs girls’ basketball teams met for the second time this season last Tuesday night at Case Auditorium where the host Lady Bison were hoping to avenge an earlier loss to the Lady Moguls in the West River Tournament by a score of 18-36.

Unfortunately for Hot Springs, last week’s game started much the same as their first meeting as the Lady Moguls jumped out to a commanding 10-1 lead in the first quarter, which proved to be the difference in the game as Edgemont ultimately won by seven points, 42-35.

“I thought the Lady Moguls came out ready to play by taking an early 10-1 lead,” said Edgemont head coach Lane Ostenson. “I’ve got to give credit to Hot Springs as they kept playing to the end. My assistant coach Koel Barker commented, ‘They (Hot Springs) kept adjusting through out the game and it kept them in it.’”

Edgemont increased their lead to 21-9 at halftime, but in the second half, Hot Springs outscored the Moguls 26-21 and made it a good game down the stretch.

“This was a hard fought game by both teams,” said Hot Springs head coach Tanna White. “Unfortunately the girls came out slow and didn’t play a great first quarter which was reflected in the score. The girls did a good job starting out the half with pressure and made up a lot of ground in the 3rd and 4th quarters but unfortunately couldn’t come up with enough for the win.”

“I thought we came out and did what we needed to do to get a win,” Coach Ostenson said. “It wasn’t pretty but a win is a win and that is what we needed this time of the year. I thought that Maddie, Morgan, Abby had solid performances tonight. Our players coming off the bench gave us some quality minutes tonight.”

“I was proud of the girls for their grit throughout the game and unwillingness to quit even when down,” Coach White said. “They made a huge comeback and we just needed some more minutes on the clock in the end.”

This past Monday night, Feb. 18, the Edgemont Lady Moguls hosted and defeated Jones County in the first round of the Region 7B playoffs by a score of 47-40.

The Peterson Pair once again led the way for Edgemont as Maddie scored 24 points and Morgan scored 18. Both girls were 5-for-6 from the free throw. Maddie also made five 3-point baskets as Morgan made three from beyond the arc. Abby Tidball led the team with 11 rebounds.

Hot Springs also played St. Thomas More last week, and lost by a score of 10-53. This week, they wrap up their regular season with a home game versus Spearfish on Tuesday night.