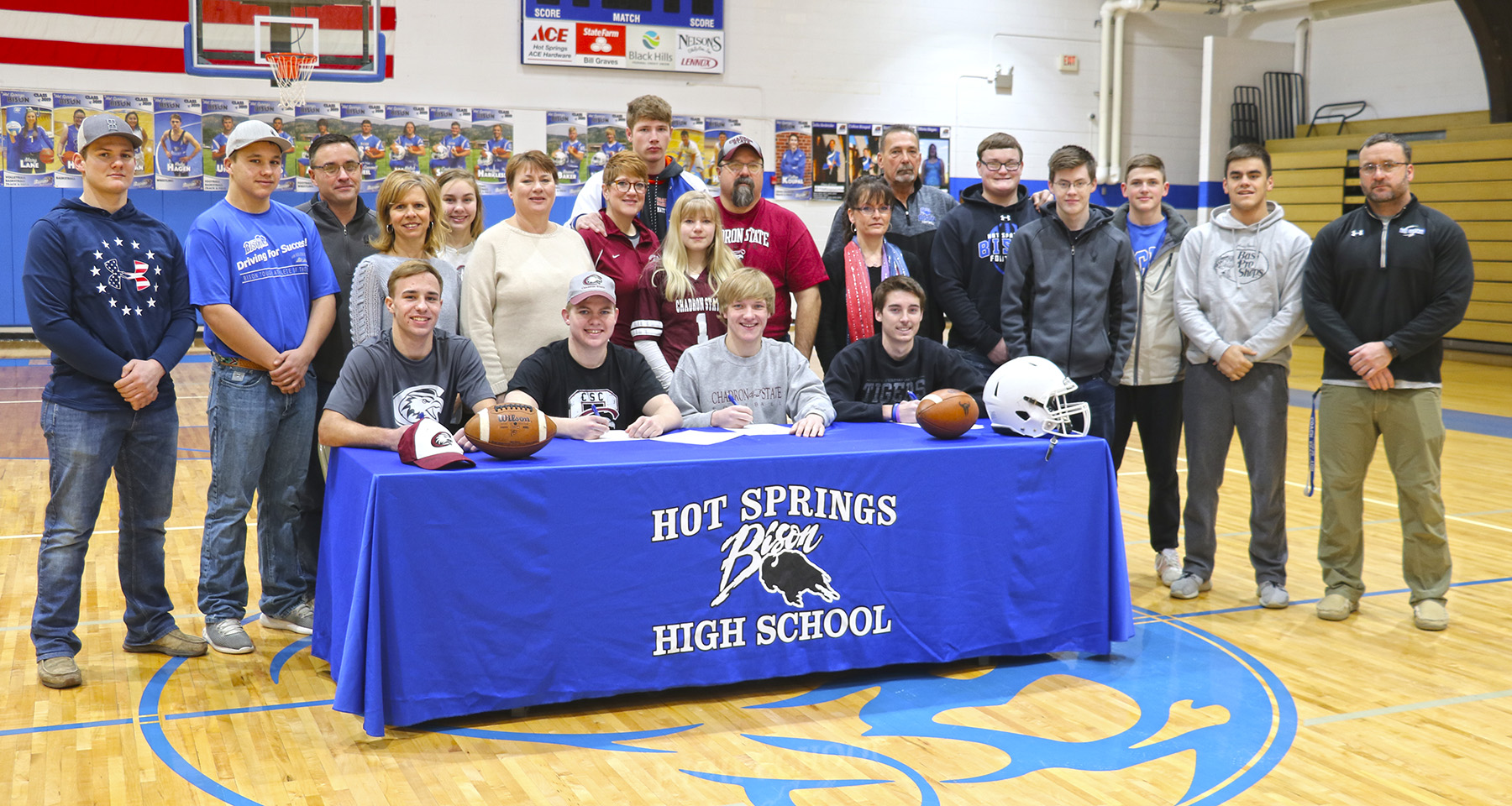 HOT SPRINGS – Four Hot Springs Bison senior football players signed official Letters of Intent last week on Wednesday, Feb. 6, to play football in college beginning next season, including a trio of student-athletes who are headed south of the border to Chadron State College in Nebraska, as well as one going east to Dakota Wesleyan University in Mitchell.

Planning to become a CSC Eagles next year are Morgan Harkless, Andrew Wendland and Brand Baker, and suiting up for the DWU Tigers is Matt Norton.

“Its a proud moment anytime you get kids into the next level,” said Hot Springs Bison head coach Ben Kramer. “I always feel like I’ve done my job when kids leave our program and still want to play the sport of football. We push them hard but not to the point where they get sick of it. I think we offer a great mix of preparation and the understanding that they’re kids and need to be kids.”

Harkless was named a 2018 All State Defensive Back as well as All-Black Hills Conference while also having a standout season on offense for the Bison from his quarterback position, setting the new school record for Most Points Scored in a Career with 348, which broke the total of 340 set by his older brother Brady (2008-2011) who went on to play football collegiately as well, at Dickinson State University in North Dakota.

Morgan’s 2018 season-ending stats included completing 69 of 138 passes for 965 yards and throwing for 13 touchdowns and five interceptions. He also rushed for 459 yards on 89 carries and scored 11 touchdowns. Defensively, he had 52 tackles (33 solo), three interceptions - two of which he returned for TDs.

He is the sixth of eight children of Scott and Kelly Harkless of Hot Springs. Older brothers Matt and Brady both played college football for Dickinson State, while older brother Brice currently plays for Black Hills State University in Spearfish. Other older siblings include brothers Justin and Jared. He also has a younger brother Marcus who is a sophomore at HSHS and younger sister Brooke who is a freshman at HSHS.

Baker was an Academic All State recipient for the Hot Springs Bison this past season and was also named an All-Black Hills Conference lineman while earning a team-high 77 tackles (32 solo) with three sacks and 11 tackles for loss.

Brand is the son of John and Liz Baker of Buffalo Gap. Brand has a younger sister Kylene who is a freshman at HSHS.

Wendland, who was a transfer student-athlete from Crawford, Neb., following the Rams’ move to six-man football just prior to his senior season there, was an All-Black Hills Conference running back for the Bison in 2018. He rushed for a team-high 938 yards on 150 carries with seven touchdowns. He also caught 18 passes for 121 yards and got 58 defensive tackles (30 solo) and caused three fumbles. In addition to his success for the Bison this past season, Wendland also holds the Nebraska all-class single-game state receiving record of 365 yards which he set while a junior at Crawford.

Andrew is the son of Jeff and Becky Wendland of Hot Springs. He also has a younger brother Matt, who is a junior at HSHS, and a younger sister Megan, who is a freshman at HSHS.

Chadron State College is an NCAA Div. II school that competes in the Rocky Mountain Athletic Conference, alongside South Dakota schools Black Hills State and South Dakota Tech. The Eagles finished last season in third place of the final RMAC standings, with an overall and conference record of 7-3. Their head coach is Jay Long.

Norton caught 30 passes for 542 yards and recorded 19 total tackles and finished 15-for-20 on PAT’s. He was named to the All-State Honorable Mention Team this past season for his efforts at wide receiver. He broke the school record for most touchdown receptions with 11 and broke the school record with 542 receiving yards. Norton was also named to the All-Black Hills Conference Team and was tabbed the Special Teams MVP. He was a two-year starter in football and competed in basketball and track.

His school of choice, Dakota Wesleyan University, competes in the Great Plains Athletic Conference of the NAIA and finished the 2018 season with a record of 2-9 overall, and 1-8 in the GPAC. Their head coach is Ross Cimpl.

Matt is the son of Mark and Tammy Norton of Hot Springs. Matt’s older sister Andrea is a junior on the Briar Cliff University women’s volleyball team, which is also a member school of the Great Plains Athletic Conference.

“The selfish part of me is really happy that we get some guys into local colleges,” Coach Kramer commented. “It becomes much more feasible to drive down the road on a Saturday and watch them compete. I’m really looking forward to watching these four progress with their new team.”