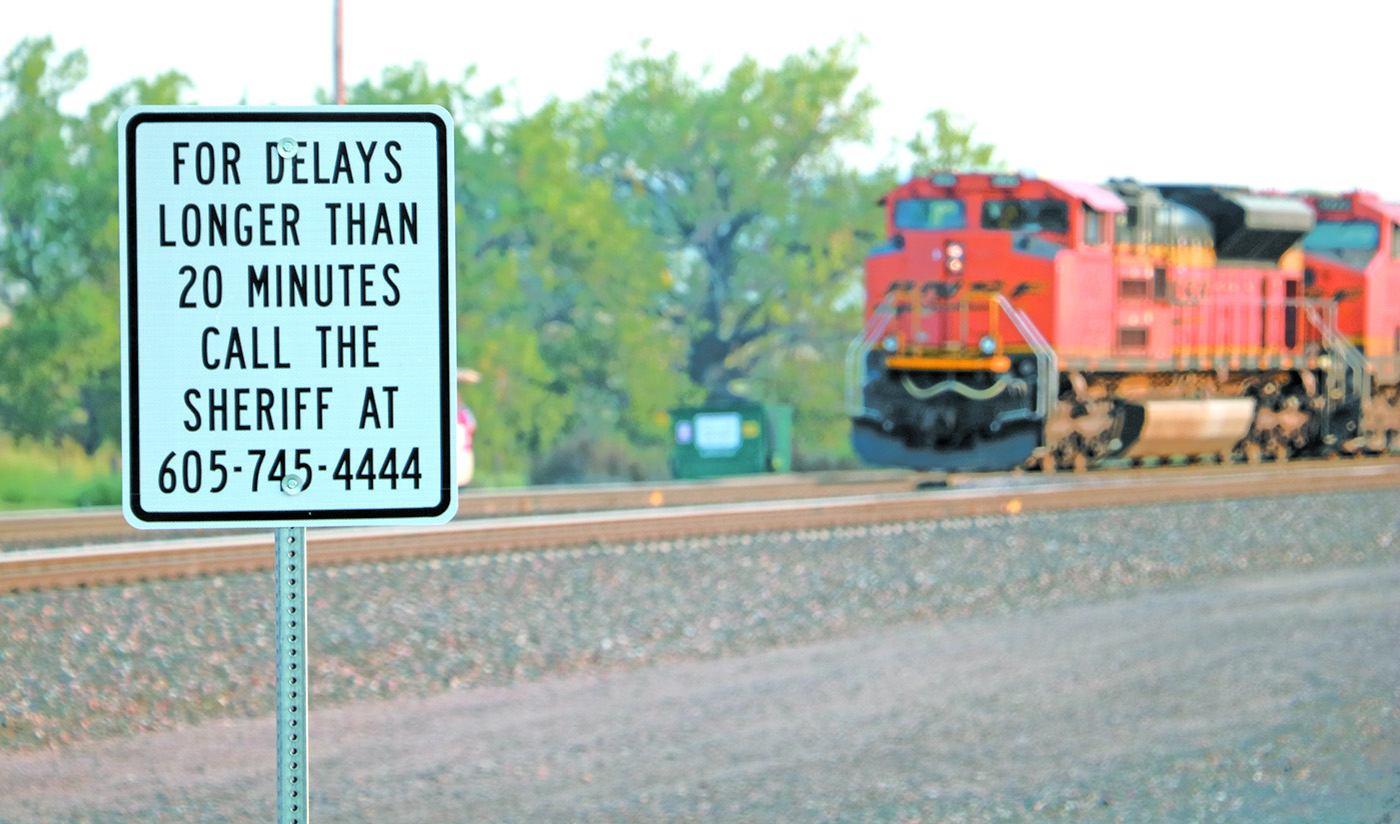 HOT SPRINGS – Describing how his granddaughter was recently forced to wait 2 hours and 20 minutes for rail cars to unblock the highway leading in and out of Edgemont, Fall River County Commissioner Joe Falkenburg is demanding something be done soon to alleviate the problems area residents have been experiencing more and more as of late.

“This situation is kind of like cancer,” Falkenburg stated during the Aug. 20 commission meeting in Hot Springs. “If you don’t have to deal with it, its not your problem. But it is a big problem.”

Falkenburg is proposing that the county implement an ordinance which forces BNSF railroad in Edgemont to take more responsibility for the situation, through the requirement of documenting all blockages which last longer than 20 minutes and also through the heavier penalties, potentially including an arrest warrant and personal fine levied on the BNSF carrier officer who has operational jurisdiction.

Falkenburg said the railroad blocking the highway is not a new problem in Edgemont, but it seems its gotten a lot worse lately, especially on the south side of town where the railroad cress SD Hwy 471. Fall River County Sheriff Bob Evans agreed and said his dispatchers have seen a huge increase as of late with people calling to complain about the highway blockage.

Currently, when drivers find themselves stuck in the road behind stopped train, they are instructed by a sign that sits alongside the road to call Fall River Dispatch for any wait longer than 20 minutes, which is something Sheriff Evans wanted to see changed. He said his department, and especially his dispatchers, can’t do anything about it.

“Why not call the railroad?” Evans asked the commissioners, to which Falkenburg responded, “People call you because they’re frustrated and don’t know what to do and hoping the sheriff will do something about it.”

Unfortunately, according to Deputy States Attorney Brian Ahrendt, the S.D Codified Laws governing the blockage of highways by railroads are some of the weakest in the country. He said the only penalty that can be enforced by law is a Class 2 Misdemeanor and that only applies if the railroad blocks the road for an emergency vehicle. While some surrounding states like Wyoming have no laws against trains blocking highways, many other states have strict penalties that can be enforced after blockages of only 10 minutes, he said.

Ahrendt also added that the current sign posted by the railroad crossing which forbids blockages for longer than 20 minutes lacks the teeth to enforce.

Sheriff Evans questioned the railroad’s ability to get away with blocking a state highway without some penalty from the state.

“If there’s an accident and I have to stop a highway for Life Flight to land, I gotta jump through hoops,” Evans said. “How can a railroad just shut it down?”

Falkenburg asked both Evans and Ahrendt to work together on some sort of resolution to the issue, including opening up discussions with the state and with BNSF railroad. Hopefully, he said, the commission can get something done with the issue at their next meeting in September.