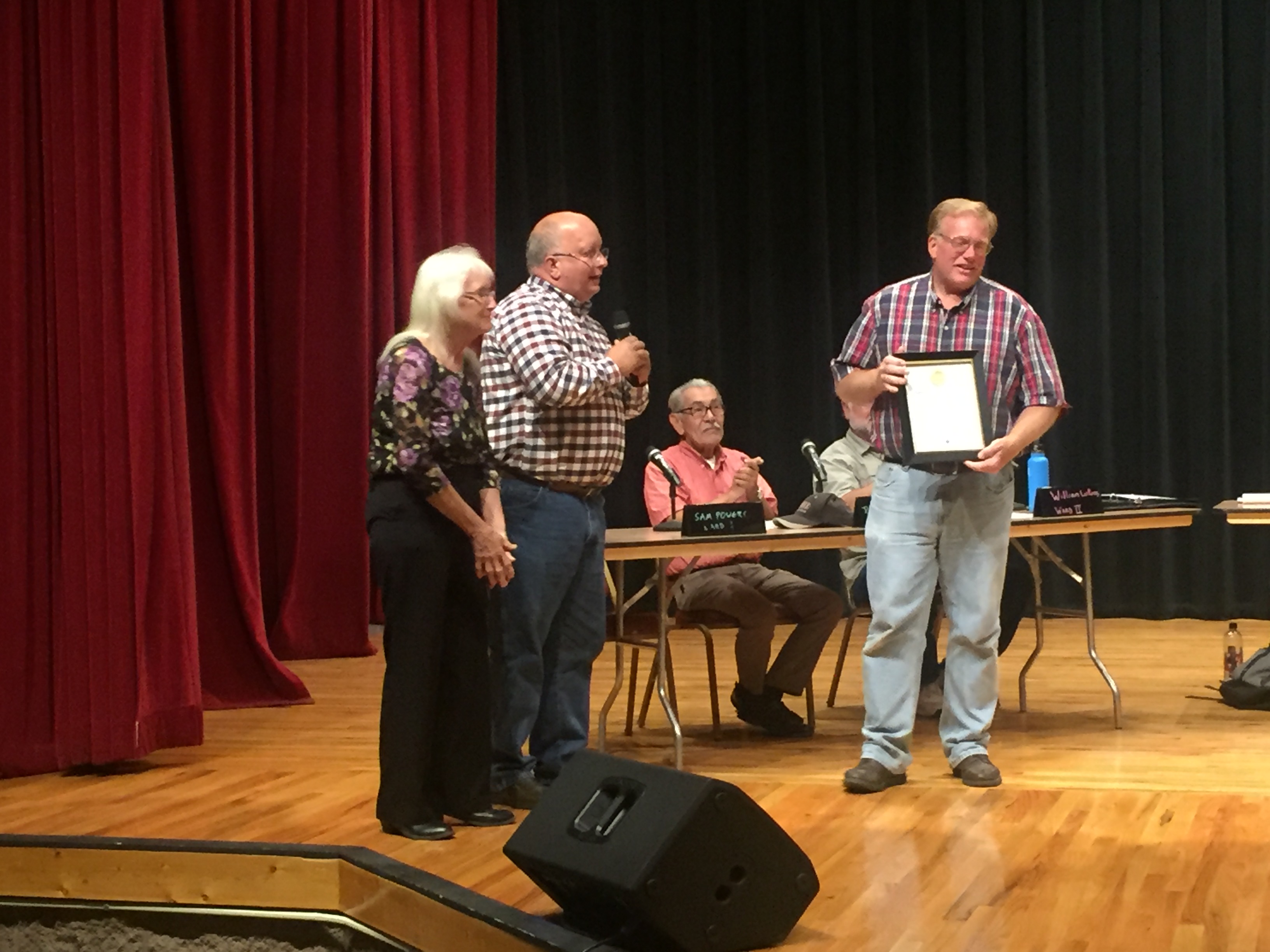 HOT SPRINGS – City employee Karl Bochert of Hot Springs was presented with a certificate of appreciation from Richard Smith, the Executive Director of the American Red Cross of Rapid City during the regular meeting of the Hot Springs City Council on Monday, Aug. 20.

Smith, who was joined on the Mueller Center stage by Sharon Moad who recently served as the local shelter manager during the recent Vineyard Fire, called Bochert a “blessing” and complimented him  for his care and attention to detail. The pair also complimented the City of Hot Springs and the Mueller Center for how accommodating they always are in an emergency event like the Vineyard Fire, and how they wished all facilities were as nice as Hot Springs’.

Near the beginning of the meeting, the council also heard updates from seasonal city employee Kathy Hren about the Summer Rec Program, and also a quarterly update from Hot Springs Area Chamber of Commerce Executive Director Olivia Mears.

In her report, Hren said the recently completed summer rec program was “a lot of work, but a lot of fun.” She said she attributed much of the success of the program to the collaboration amongst members of the community, including the Hot Springs Schools as well as city staff and other groups like the Southern Hills Community Recreation Initiative (SHCRI). She also complimented some of the summer rec staff who went above and beyond to ensure the success of the program, including the baseball coaches who donated their wages back to the city which helped pay for the cost of having the teams be a part of the Chadron league.

A total of 563 children were enrolled in summer rec this past year, which while down from past years, Hren said it was most likely due to decreasing the number of sessions of swim lessons at Evans Plunge. Also a member of the Plunge Advisory Committee, Hren said having only one 3-week session was still what she recommended doing during the summer, due to increased tourism traffic at the indoor swimming center.

For next year, Hren is recommending that the city look into offering on-line enrollment for summer rec. Several members of the city council applauded Hren for her efforts and thanked her for her hard work.

Mears’ Chamber update summarized a number of events her group has hosted this year, including the Bikers, Bison & Brew event in conjunction with the Sturgis Rally. She also spoke at length about this weekend’s 3rd annual Fall River Hot Air Balloon Festival and her pride in how the Chamber was able to spend nearly 90 percent of the event’s expense budget with local businesses. See the insert in this week’s Fall River County Herald for more information about that event.

In other business, the city council:

• Unanimously approved the first reading of Ordinance 1190 which sets the total fine and bond for violating the city’s fireworks code at $120. It was pointed out that the fine had always been part of the city code, however the previous wording made it difficult for law enforcement to enforce it.

• Unanimously approved Resolution 2018-14 which sets a Hot Springs Police Officer Wage Scale at $22/hour as Top of Scale, with the beginning wage for all new officers at 80 percent. It was pointed out that Chief of Police Mike Close requested this be put in place to allow the city to be more competive for attracting new officers, in comparison to other area towns.

• Unanimously agreed to appoint Christine Heidebrink to the Planning & Zoning Commission. Her new position replaced Alison Ritterbush, who needed to step down since being appointed to the Hot Springs City Council.

• Approved a bid of $41,831 (plus $750 for bypass pumping and $3,950 for traffic/pedestrian control) from Main Line Contracting to replacing the sewer line on North 17th near the school, which has been causing the sewage to back up into the basement of a nearby resident. Mayor George Kotti said conventional repairs on this particular section of sewer was not feasible due to the impact it would have on the school’s new sidewalk and roadway. This company is able to tunnel under those things using pipe bursting methods.

• Heard from Mayor Kotti regarding a meeting the city had with SD-DOT and the Army Corps of Engineers about the proposed cantilever sidewalk. Kotti described concerns the Corps has regarding the flood wall running parallel with Fall River River, and how the Corps indicated the city would need to analyze its quality and then pay for any necessary repairs, even though the Corps is ultimately responsible for managing the river and the flood wall, Kotti said.

• Heard from City Administrator Kim Barbieri who said the city’s next Free Dump Week will be Sept. 24-28.

Hot Springs’ Karl Bochert, right, is presented a certificate of appreciation from Richard Smith and Sharon Moad with the American Red Cross.