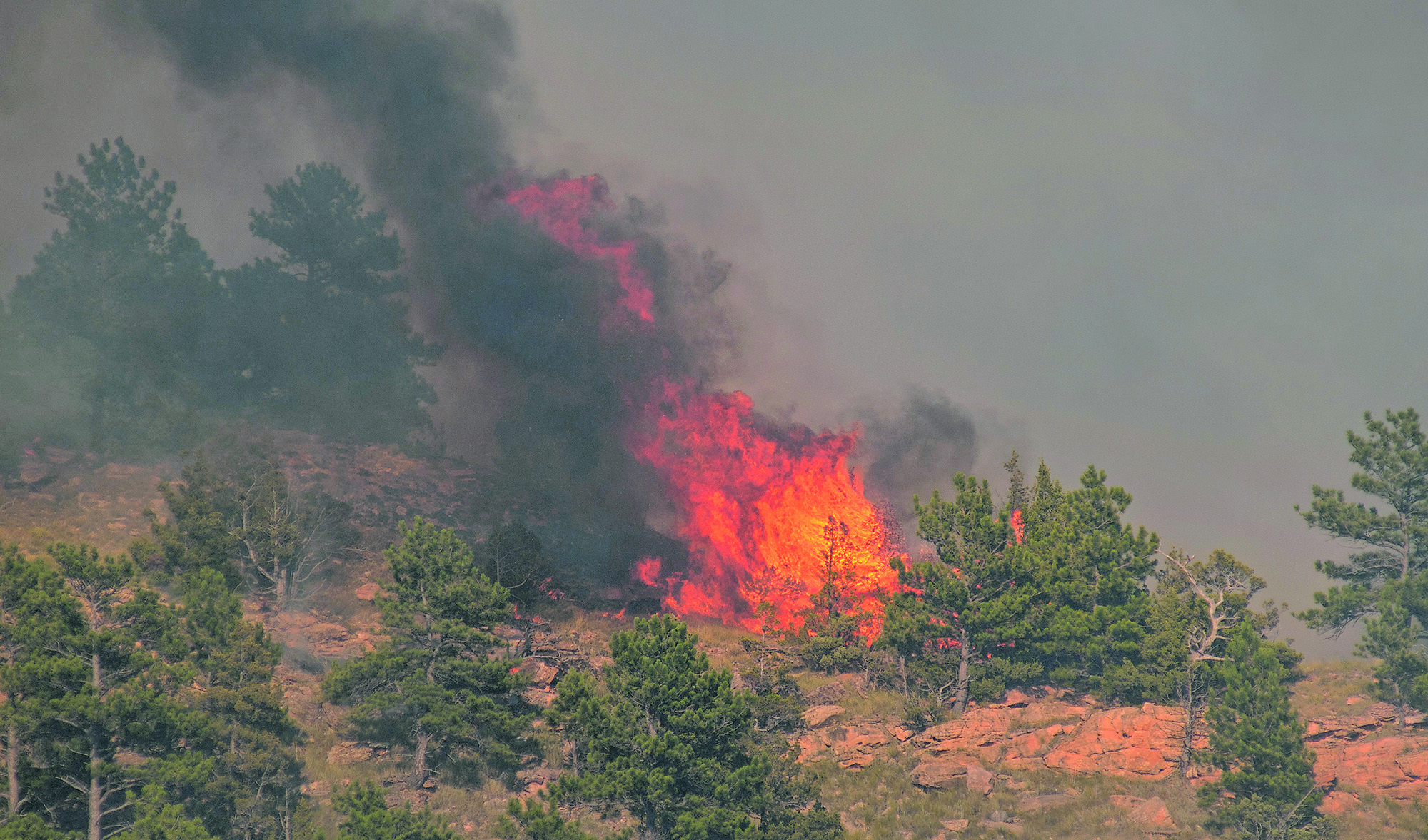 HOT SPRINGS – The previously quiet wildland fire season in the Southern Hills came to a frightening and fiery end this past weekend, as what became known as, the Vineyard Fire burst onto the scene Saturday afternoon, Aug. 11, and threatened dozens of Hot Springs residents and their homes.

The fire started at approximately 3:45 p.m. along the north side of Hwy. 385/18, also known as Fall River Road, less than one mile from the city limits of Hot Springs. Despite higher than average levels of precipitation this summer, this past weekend’s 90-plus degree daytime temps and low relative humidity helped to fuel the fire to quickly spread up the hillside running parallel with the highway, and towards town.

As local, state and federal firefighters began to battle the blaze, immediate evacuations were put into place for residents living nearby in the Valley View and Eagle Valley subdivisions.

In total, between 70 to 80 homes would eventually be evacuated over the course of the battle on Saturday and Sunday, which would also include in-town residents living along 3rd through 6th Streets in the eastern side of the city. By Sunday evening however, thanks to incredible progress on the fire made possible by an aggressive air attack with slurry bombers and helicopters, all residents whom were evacuated were given the green light to head back to their homes.

Amazingly, and despite the loss of some various out-buildings and vehicles, no homes were lost in the fire and no one was reported to have been injured, as of Monday, Aug. 13.

As of that same evening, the Vineyard Fire was reported to have consumed 560 acres and contained at a level of 40 percent. While it was still burning to the east of the city, smoke was very visible to city residents by Monday afternoon, which is in stark contrast to the scene on Saturday evening and all day Sunday when smoke, flames and airborne suppression efforts were the norm for all to see.

“I did have fears in the beginning,” she said, “because I could see trees torching on the hillside Saturday night.” She never really felt threatened though because their home is on the south side and she considered it was homes in the north area that were being seriously affected by the fire closing in on their residences.

“I was mostly concerned about my neighbors,” Stokes said. “We are mostly retired out here and the heavy smoke and breathing problems could be an issue, but thankfully that didn’t happen,” she said.

Stokes said this experience was a good lesson because you can’t take everything with you. “Sure, we gathered up important papers, family photos, and that kind of thing, and my daughters called and said not to forget grandpa’s trunk.” Stokes allowed as to the importance of the family trunk. “It has quite a history,” she said, “That’s how my father came across the Rio Grande River, hidden in that trunk.”

Stokes’ father was an artist and they took his paintings down. “It was with thankfulness when we put them back on the walls,” she said.

Stokes says she feels relieved and very thankful to be back home. About the experience, she cautions, “Remember that things can change in a matter of minutes. It’s important to be watchful of what we do and be careful with fire of any kind.”

Stokes praised the community. “So many good people donated water and other items for the firefighters. It’s a dangerous job, and I’m so thankful for them. We have people with really big hearts in Hot Springs and so many of them offered us their help. It’s such a caring community and we don’t always realize it unless we’re the recipient.”

When the fire broke out on Saturday afternoon, Art Balgheim said he was on his way into town from a house he takes care of near Wind Cave. When he saw the smoke coming from near the direction of his home at the top of Valley View, located east above Taco John’s, he headed for home and immediately began packing up possessions in anticipation of evacuating. He said, a few minutes later, fire personnel were knocking on his door telling him to do just that. He and his family, including wife Leah, then returned back out to the home he cares for near Wind Cave.

After being given the go-ahead to return to his home, he was back on Monday surveying the effects of the fire, but was pleased to see his home still standing. He however said he didn’t plan to stay the night in his home again until the fire was completely contained.

His in-laws, George and Judy Sigafoos, who live next door, were evacuated as well on Saturday, but were moved back into their home on Monday. Judy however said they were not yet unpacked and ready to leave again if they had to.

The Sigafoos, who have raised five children while living near the top of Valley View since 1976, lost their previous octagon-shaped home on the hill in a fire in 1984. While no one in the family was injured in the fire, the experience had its share of ‘what ifs’ and close-calls which are always in the backs of their minds.

“We’ve probably got a little different attitude about fire today than some others may have,” Judy said. “We’re just thankful for life.”

Judy added that they were actually evacuated twice. After leaving their home on Valley View, they went to stay with their son who lives on 4th Street whose house was evacuated on Sunday. She said they then went down to the Mueller Center to stay at the Red Cross shelter, but by the time they made it there, the evacuations were lifted and could go home. Judy however said that rather than going all the way home, they went back to their son’s and then returned to their own home on Monday.

While the Sigafoos’ home was unscathed in the fire, they did however lose a couple of out-buildings, a camper and a trailer, according to Balgheim.

After most everyone had returned to their homes by Monday, the Type 3 Incident Commander of the fire Ray Bubb said that most of the fire had moved on to the other side of Dudley Canyon where crews were actively establishing and reinforcing existing fire lines. Plenty of personnel however were still on scene working in and around the residential areas close to town as well.

“Dudley Canyon is kind of the line over there and we also have to dig hand lines there, and we can’t go any higher there because of the rough terrain. Our biggest concern is this area right above Hot Springs,” Bubb said.

Joe Johndreau, the public information officer working the fire for the National Forest Service, said an investigator was on the scene Monday to try and establish a potential cause of the fire, but nothing had been determined as of yet.

After refilling with a load of retardant at the Rapid City airport on Sunday, this four engine jet-powered slurry bomber drops a huge load of flame-retardant on another section of the fire overlooking Hot Springs. More fire photos on page A8.