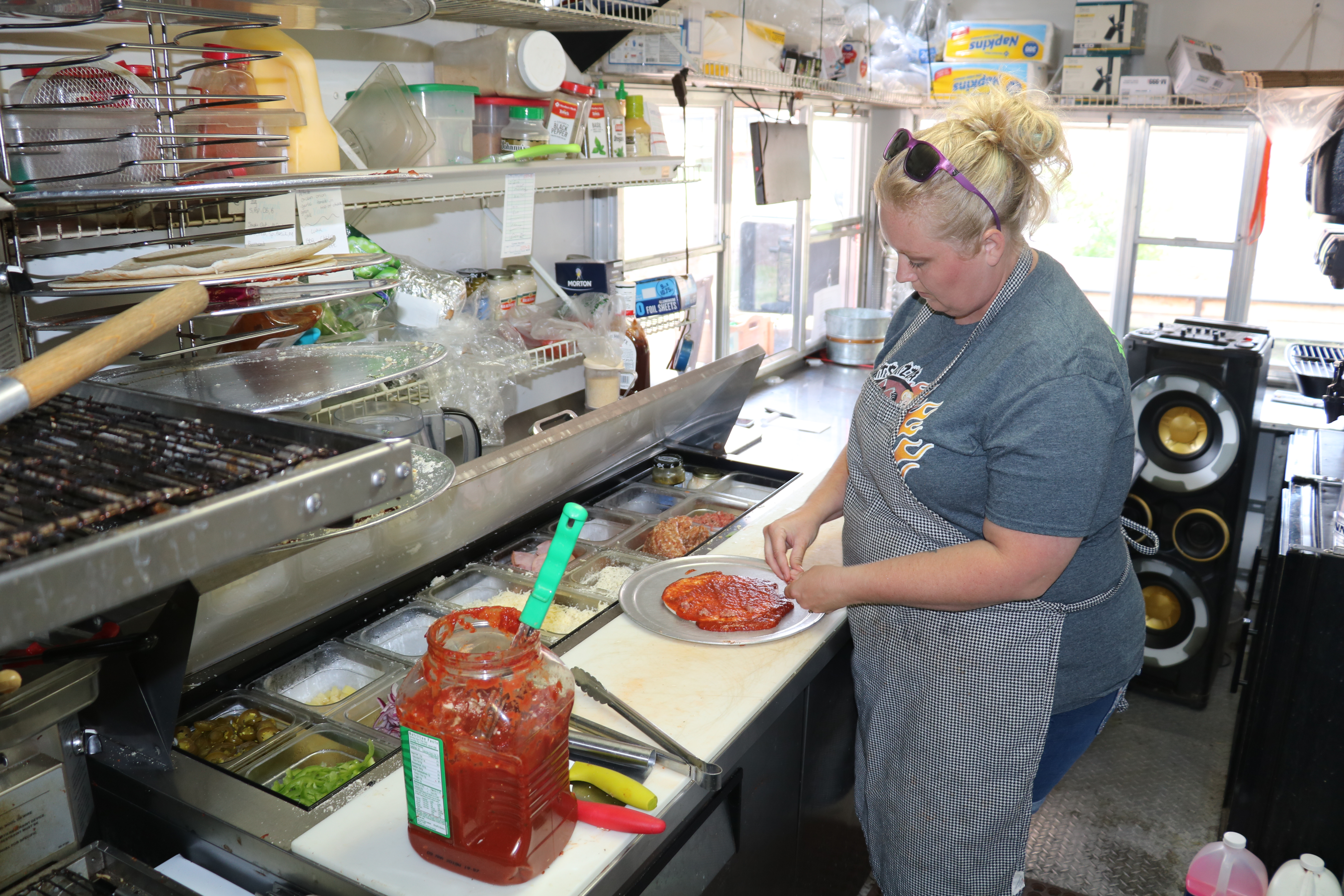 HOT SPRINGS – In the five years that Shawn and Ashley Miller have been traveling all across the United States in their RV and pizza wagon known as Burnout’s Pizza – visiting venues from Texas to Ohio to Florida and to Utah – they’ve always seemed to make time to visit their aunt and uncle Ray & Chachi Palmer in Hot Springs.

Hot Springs, they said, reminds them each of their hometown of Warrenton, Mo., which at one time was similar in size until more and more people began moving out of nearby St. Louis and into the then-smaller rural areas of east central Missouri.

“We used to always use the Sturgis Rally as an excuse to come to South Dakota,” Shawn said, adding how much they have always loved the natural beauty, wildlife and weather of the area.

While working such events as the Kentucky Derby to the Daytona and Sturgis motorcycle rallies, they said the “RV Life” suited them, but the constant year-round travel from one event to another began to take its toll, especially doing it while raising their 10-year-old daughter.

Recently, on a visit to Hot Springs to see their Uncle Ray and Aunt Chachi, the two were talking to the  Palmer’s neighbor Cindy Donnell, who offered them the opportunity to set up their mobile pizza business on a permanent site, on land she owned adjacent to Kidney Springs, just off of N. River Street in downtown Hot Springs.

The two looked at the site, and on a leap of faith, decided to give it a shot and opened for the first time on July 5.

Their longtime and ever-growing love of the community of Hot Springs, combined with their initial financial success, has made both Shawn and Ashley very satisfied with their decision. Enough so, to make them decide that Hot Springs is where they want to live and work permanently.

“Our traveling days in the green box oven are over,” Shawn said.

“We’re calling it home and moving in!” said Ashley.

Their daughter Abigail is currently staying with family back in Missouri, but she will soon be moving up to Hot Springs, and into the Palmer’s guest house with her parents and their pet beagle Loretta, and then enrolling at Hot Springs Elementary School.

“Our daughter’s only requirement for us moving here was that we get her a season pass to Evans Plunge,” Ashley laughed!

But despite their plans to keep their mobile pizza business in a permanent site, they have no intentions of ever moving out of the “green box oven,” as they feel the compact structure provides a better way to manage overhead while also allowing a closer attention to detail of their final product – thin and crispy pizza using a variety of meats, a unique blend of cheese and fresh cut vegetables.

While being in the mobile food service business together for only the past five years, Ashley has actually been spinning pizza dough for most of her life while working part-time for her mom’s pizza franchise for many years in Missouri. Eventually, after Ashley and Shawn married, the two left their other jobs – Shawn’s heating/air conditioning business and Ashley’s hair styling career – and began working full-time together for her mom, but handled the mobile/event part of the business.

When it came time for Ashley’s mom to get out of the franchise, the Miller couple had become accustomed to life on the road, and instead of taking over the storefront business from her mom, they instead chose to take that same mobile kitchen, peel off the old vinyl, create their own menu and set out on a business venture of their own.

The result was “Burnout’s Pizza” – a name, logo and color scheme which all pays tribute to a close friend and groomsman in their wedding named C.T., who died suddenly and tragically at the age of 28 in a garage accident while working on a vehicle.

As they began to develop their business name and brand, both Shawn and Ashley said it came naturally as they creatively worked in their friend C.T.’s constant desire to “burn out” tires on his motorcycle and his zest for life through their business logo which features an attractive blonde female on a bike with pizzas for wheels.

While taking their mobile pizza business across the country, Ashley and Shawn remarked how interesting it was to learn the food and drink preferences depending on the region.

Like no place they have ever been before, Hot Springs loves its chicken pizzas, they said, as the town’s two top specialty sellers are easily the “Smokeout” featuring Alfredo sauce and chicken, and the “Luau” featuring Sweet Baby Ray’s BBQ sauce and chicken.

In Ohio, its plain old Cheese Pizza, they said. And in Texas, its the “Hog” featuring all things pork including Italian sausage, Canadian bacon, pepperoni and bacon. In addition, they said people in Texas drink Dr. Pepper by the gallon, while South Carolina loves its tea as sweet as you can get it!

While pizza and garlic bread are the business’s only current menu items, they both said they plan to debut more and more things in the future. They also have plans to add additional outdoor seating while adding to the ambiance of dining experience with different types of décor.

Being “green” is not only the color scheme on their kitchen but also a way of life for the Millers, as they recently installed a wind generator on top of their kitchen, have plans to eventually become powered completely by solar energy, and also begin using bio-degradable pizza boxes.

They are currently open seven days a week, from 11 a.m. to 9 p.m. Monday through Saturday, and 4 p.m to 9 p.m on Sundays. You may also call ahead your order by calling 636-377-3923 and also visit them on Facebook for news and announcements about any additions to their menu.

ABOVE: Burnouts Pizza owners Shawn and Ashley Miller stand in front of their green mobile kitchen while holding up a pair of mini pizzas, from their location near Kidney Springs in downtown Hot Springs.

RIGHT: Ashley works inside their compact kitchen while applying toppings to the pizza dough.