HOT SPRINGS – Henry Thoreau once said, “Many men go fishing all their lives without knowing that it is not fish they are after.” While people say “they are going fishing,” often they are seeking something that fulfills their life, their dreams, their thoughts and peace of mind. Quite likely, Julius Maurice Johnson of Hot Springs also subscribes to that outlook.

In June of 2016, Julius Johnson ‘came home’ to Hot Springs, although he did not know so at the time.

The VA had sent him here from his previous home in Denver, Colo. – for further treatment of his PTSD (post-traumatic stress disorder) symptoms. They stemmed from a hitch he did in the U.S. Navy from 1974 – 1977 where he was a communication specialist and spent time at three different naval bases.

Post-traumatic stress disorder is a mental disturbance that can develop after a person experiences a traumatic event such as warfare, traffic collisions, sexual assault or various other radical departures from a person’s previous life experiences. Symptoms generally include disturbing thoughts and dreams, mental and/or physical stress, alterations in how a person thinks or feels and assorted-other forms of self-destructive behavior.

While these symptoms can begin within the first three months following a traumatic event, they are frequently delayed until years later, causing the patient much confusion, guilt and hostility. And certain occupations found to carry a higher risk for this disorder include military personnel, police officers, firefighters, emergency service workers, health care professionals and journalists. Victims of interpersonal violence, such as bullying and especially rape, are commonly beset with PTSD symptoms.

A frequent misperception about PTSD effects among military personnel is that only combat veterans are affected, but such is not the case. Julius Johnson never served a day in combat or even at sea while in the Navy, yet his years since have definitely been a rollercoaster ride. Research has shown that PTSD can also result from an extreme change in a person’s experiences to which they are unable to adjust.

Following his discharge from the Navy in 1977, Johnson held a number of jobs before moving to Denver in 1981. For the next 10 years he worked as a shoe salesman for the Kenny Shoes Company and then for Tom McCann. Unfortunately, during this time he was also a salesman for other things as well – namely cocaine. Drug and alcohol abuse often co-occur with PTSD symptoms and throughout the next decade, Johnson’s life fell into the throes of addiction.

At the end of those years came the dissolution of his first marriage and a prison sentence for cocaine distribution. Upon his release from jail in 1992, he began the road back by becoming an addictions counselor. He began a new marriage which over the next 20 years would produce seven children and three grandchildren. Sadly, he was still unable to conquer his own demons and they began to reemerge. In 2012 he was again divorced and began another trip down a destructive road for the next three years. 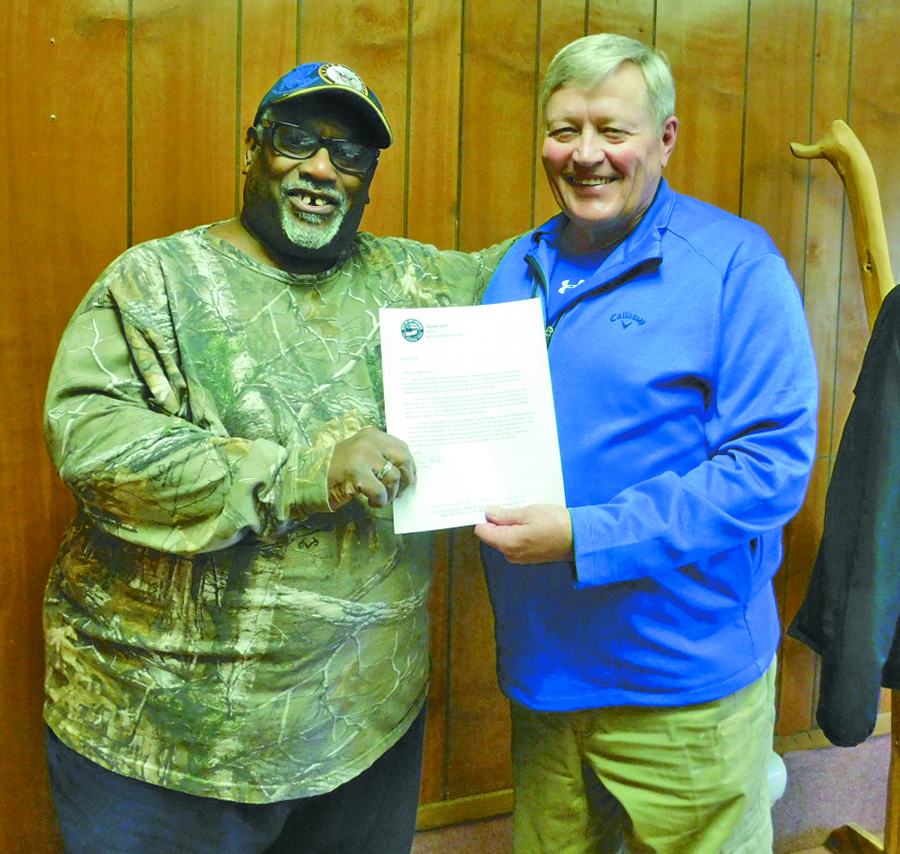 Fortunately, this time that road ended at the Hot Springs VA rather than prison again. “I like to call Hot Springs my Mayberry – you know, like in the old Andy Griffith show. Things really started to go back together for me here. I never thought that I would love this place like I do. Once again there was hope.”

Johnson had started fishing when he was four or five years old while growing up in Memphis, Tenn., but he hadn’t done any for many years. His interest began to grow again and during that first summer here an idea began to take shape in his head – Casting Vets.

One of his VA therapists, in trying to reduce his use of anti-depression drugs, had advised him to remember and concentrate on a place or time when he was happiest. For Johnson, that was fishing as a youth. And his own studies and research had convinced him the “combination of mental relaxation and an easy form of exercise could also help those who suffer from PTSD.”

A 2009 study showed that fishing can lower PTSD symptoms and increase the mood of those who suffer from this disorder. After three days of fly fishing, participants reported significant reductions in guilt, feelings of hostility, fear and sadness. Portions of these positive effects still remained even a full month after the fishing retreat. So why not a group that gives this opportunity to troubled vets on a full time basis?

Soon afterwards, Johnson joined the Southern Hills Evangelical Free Church here in Hot Springs which has gone on to help him raise $1,500 for the cost of an application for a non-profit license. “This really pumps me,” he says. “I am constantly surprised at how many people out there want to help. This is a community effort – it’s not about me.”

“When I counsel vets at the VA, I tell them everything about my life – that if God can use me, then there’s hope for everybody. The task of Casting Vets is to help all veterans to recover one step at a time,” Johnson says. “Recovery is a complicated task that takes dedication, perseverance and the support of others.”

“In my own recovery, I have found a peaceful place. A place in my mind that is receptive to both Sobriety and Recovery. The pathway to this place is illuminated by my love for fishing. This illumination is now my passion to help others achieve Sobriety One Step at a Time, and a better Quality of Life, One Cast at a Time.”

“This is what I want for these vets,” states Julius Maurice Johnson. “Giving them hope is what it’s about.”

Holding up a stringer of crappies from August 2017 is Bernard, a participant in the program entitled “Casting Vets” which was created by Julius Maurice Johnson, now of Hot Springs, as a way to help his fellow veterans suffering from PTSD.