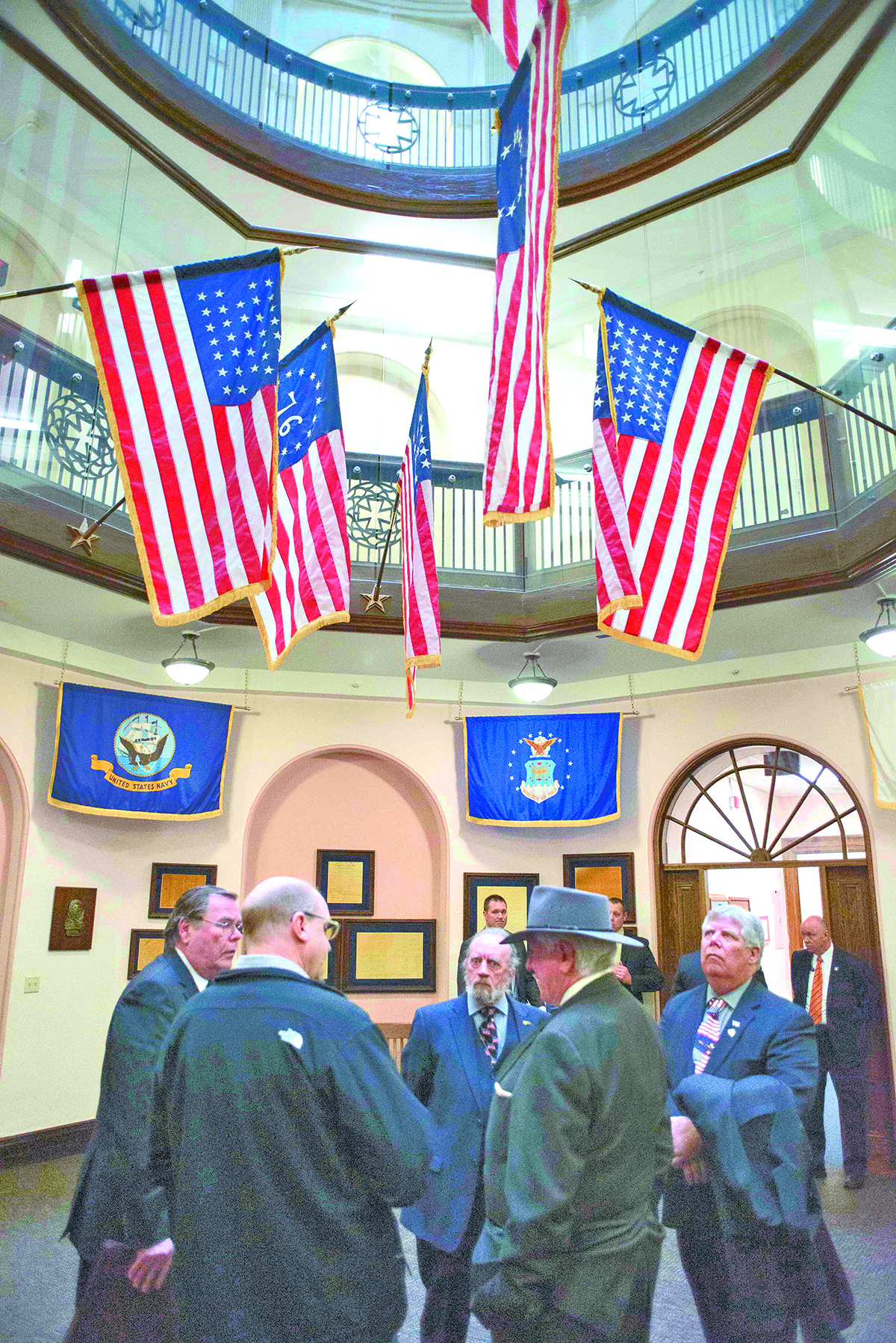 Members of the Save the VA Committee who were present in a meeting with VA Secretary Robert Wilkie last week gather in the VA Rotunda following the Secretary’s press conference. Talking with the Fall River County Herald-Star’s Publisher Brett Nachtigall, are, from left, Rich Gross, who presented the committee’s plans to the Secretary, Don Ackerman, Pat Russell and Bob Nelson.

HOT SPRINGS – Last week’s announcement by VA Secretary Robert Wilkie that the Hot Springs VA Hospital would not be closing is certainly being viewed as a big win for the Save the VA Committee and the community of Hot Springs.

However, later last week, members of the Save the VA committee cautioned area residents and veterans to not assume the announcement means the finish line has been crossed.

“I think Monday was a great day,” said Pat Russell, with Save the VA. “I think a lot of people felt that after eight years, we finally see some positive movement. But, we are cautiously optimistic because the terms ‘we will not close’ has not really been defined.”

Bob Nelson, who is also part of the leadership team of Save the VA, said someone close the situation very accurately described the situation to him to that the fact that ‘they’ve all been in a marathon, but it doesn’t feel like we’re running in place anymore.’

Nelson said the first focus of their committee and for the congressional leadership is to encourage the VA Secretary to rescind the Record of Decision, which would completely do away with the VA’s original plan to close the Hot Springs hospital and build new in Rapid City.

So far, Sec. Wilkie has just said he would take another look at the Record of Decision.

Russell said the the Secretary’s comments last week was the first time a VA leader at that Central Office had ever expressed a desire to consider one of the Save the VA’s alternatives. He added that the dismantling of the Hot Springs VA has been happening for over 20 years, so building it back up is also going to take awhile. Part of doing that then will involve fine-tuning their Op Vet proposal and start laying the groundwork to implement some of its components, which will include working closely with the City of Hot Springs and the Southern Hills Economic Development Corporation (SHEDCO).

Russell said their intentions are to keep pressure on the VA and to show the importance and value of adopting their OpVet proposal, which serves as a demonstration project for the nation with the goal of making the Hot Springs VA a center for rehabilitating veterans suffering from PTSD, traumatic brain injury (TBI) and associated illnesses.

One reason why Save the VA’s OpVet proposal struck a chord with Sec. Wilkie is likely because it fell right in line with what he has said his goals are for the future of the Department of Veterans Affairs, and that is to put a greater emphasis on mental health.

During his press conference in Hot Springs on Monday, March 2, the Secretary said, “The budget that I have presented to Congress is the largest in our history.”

“The largest expansion is for mental health – about 10 and a half billion dollars of that budget is for mental health,” Sec. Wilkie stated. “That is the last frontier in medicine. That is the issue that we as a nation have not had a long conversation about, but I think VA can take the lead and show the way forward.”

Don Ackerman, also with the Save the VA Committee, said last week’s announcement by the VA Secretary has earned the community of Hot Springs an excellent opportunity.

“We – as in Hot Springs, Save the VA, and everybody that’s been involved, from the city and the mayor – we, have won the opportunity to continue and give the care we’ve always given to the Veterans of the United States of America,” Ackerman stated. “We all, collectively, have got to work hard to prove to the VA that we deserve that right.”

Ackerman also noted that during Sec. Wilkie’s visit last week, he made particular mention of his concern about veterans suicide and acknowledged how the Hot Springs VA has helped to document the significance of this national concern for over a century.

“If you look at our proposal, its all about turning veterans around and giving them an opportunity,” Ackerman said. “Suicide is an issue when you’re in a room, a building, it’s on fire and there’s only one way out of that room. That’s suicide. And if we provide a door, they’ll take the other door. That’s the reality of what suicide is.”

Ackerman went on to say, “this is an opportunity to provide that door,” by keeping the Hot Springs VA open for the rehabilitation of veterans suffering from PTSD and TBI.

Nelson said, while previous discussions with leadership of the Black Hills VA Healthcare System, has been tenuous at best and combative at times, the Save the VA committee welcomes the opportunity to sit down at the same table and work together on the future of the Hot Springs VA.

Nelson went on to say that he hopes the director of Black Hills VA, Sandra Horsman, recognizes that and “gets on board with what is necessary to make this work.”

Another of the hoped-for, positive results following the Secretary’s announcement is what it will do in assuring potential new employees about the future stability of the Hot Springs VA.

Russell said that one of the topics brought up by Sen. John Thune to Sec. Wilkie during their meeting last week was when Thune explained that it has been difficult to recruit new employees to Hot Springs because of the dark cloud hanging over the facility, due to the fact that the Record of Decision is still in play. Russell said Sen. Mike Rounds also emphasized this fact with Sec. Wilkie.

While the need for the community to organize and get involved in the process to Save the VA is not at the level it was back in early 2012 – when 14 working groups were formed and approximately 300 people became involved in those various committees – Russell said their committee encourages interested parties to stay involved and share their ideas about the future of the Hot Springs VA.