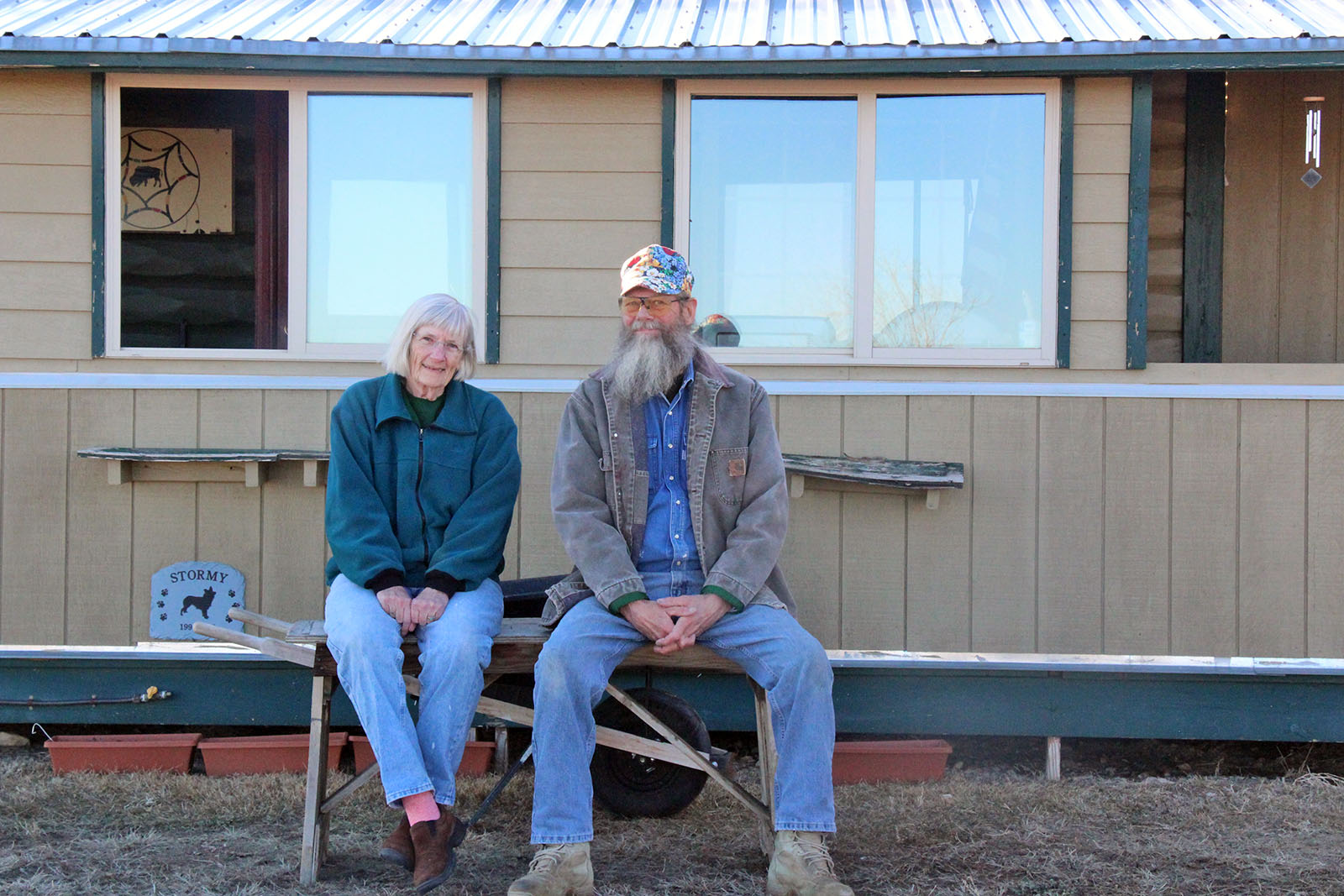 Lyle Rudloff and Katherine Dennis are pictured outside their home on Rocky Ford Road, which overlooks the Cheyenne River valley to the south.

EDGEMONT -- Fall River County appears to have its share of residents who are newcomers to the area in search of an alternative to the place from which they moved.

They moved here eight years ago from Rhode Island, looking for a slower pace and a community that would allow them to get to know other people intimately and to also include an appreciation for what folks do for a living. Of Rhode Island Rudloff says, “I didn’t know what people did. Out here that isn’t the case. You can know people and what they do for a living.”

Rudloff’s father was from Mitchell, S.D., originally, born in the “dirty 30s.” He was working as a cattle repossession authority for a bank when he met a recruiter from the Navy. He liked the sound of three meals a day and a warm comfortable bed at night, and the thought of doing something other than moving cattle for a bank.

As a result of his father joining the Navy, the younger Rudloff moved around a lot in his youth, and at the age of 3, he came to live in Rhode Island.

Self-sufficiency was learned at an early age in those days as he was picking beans in the summer by the age of 10. Eventually, he became a welder, working on submarine parts and Navy ships. His last 20 years saw him self-employed, working primarily as a yacht repairman. Slowly the boat manufacturing, and thus the repair work, dried up, a trend that Rudloff attributes to poor financial management. This, in addition to increasing rules and regulations that seemed to lack justification, sucked out his enthusiasm for living there.

So when the couple began looking for a place to move, friends encouraged them to consider destinations in the Carolinas and Florida, but those locations did not appeal to them.

Then one day they saw an article in the Providence Journal, their local newspaper, on Woonsocket, S.D. They were attracted to the small town atmosphere conveyed in the article and the friendly attitude of the people that were interviewed.

Rudloff recalls one of the more interesting facts about the town was that nearly half the town’s residents worked for a company that made glass eyeballs that were used in taxidermy. The article prompted the couple to dig a little deeper into what the state had to offer and they decided to drive out and look around the Hot Springs area for two to three days.

They returned to Rhode Island and made some home improvements and began attending town council meetings. They didn’t like all the rules and regulations that were being passed and felt as though residents really didn’t have a voice on the issues.

Rudloff specifically cites an example of a fecal coli form bacteria detection which brought about increased regulatory demands that, he said. weren’t based on evidence or the results from an investigation.

Another example he offered was that he wanted to pursue electro-polishing which involved certain chemicals and a highly regulated disposal process but when he made an inquiry, he could not get a response from the public agencies he contacted.

So two years after their exploratory visit to South Dakota, the couple sold their residence and left in their camper-trailer. Prior to leaving Rhode Island they had come across a property on Rocky Ford Road a few miles east of Edgemont with a small cabin listed with the description of “come and experience gentile living.”

After visiting a few other properties, they stopped by for an inspection and everything about it felt right. They inquired of a local realtor concerning its status and were informed that it wasn’t for sale. Rudloff insisted that it was according to the landowner and put his realtor in touch with the seller’s realtor and the acquisition of the property happened quickly.

Through the years, they have made various improvements to what was originally a 12-foot x 20-foot cabin. He likes that he can see and tell what people around the area do for a living and finds that it is easier to get to know the areas residents.

He and his wife love the open space, freedom, and natural wonders the area that he moved to eight years ago has to offer. They have never thought twice about the move and have never wanted to be any place else.