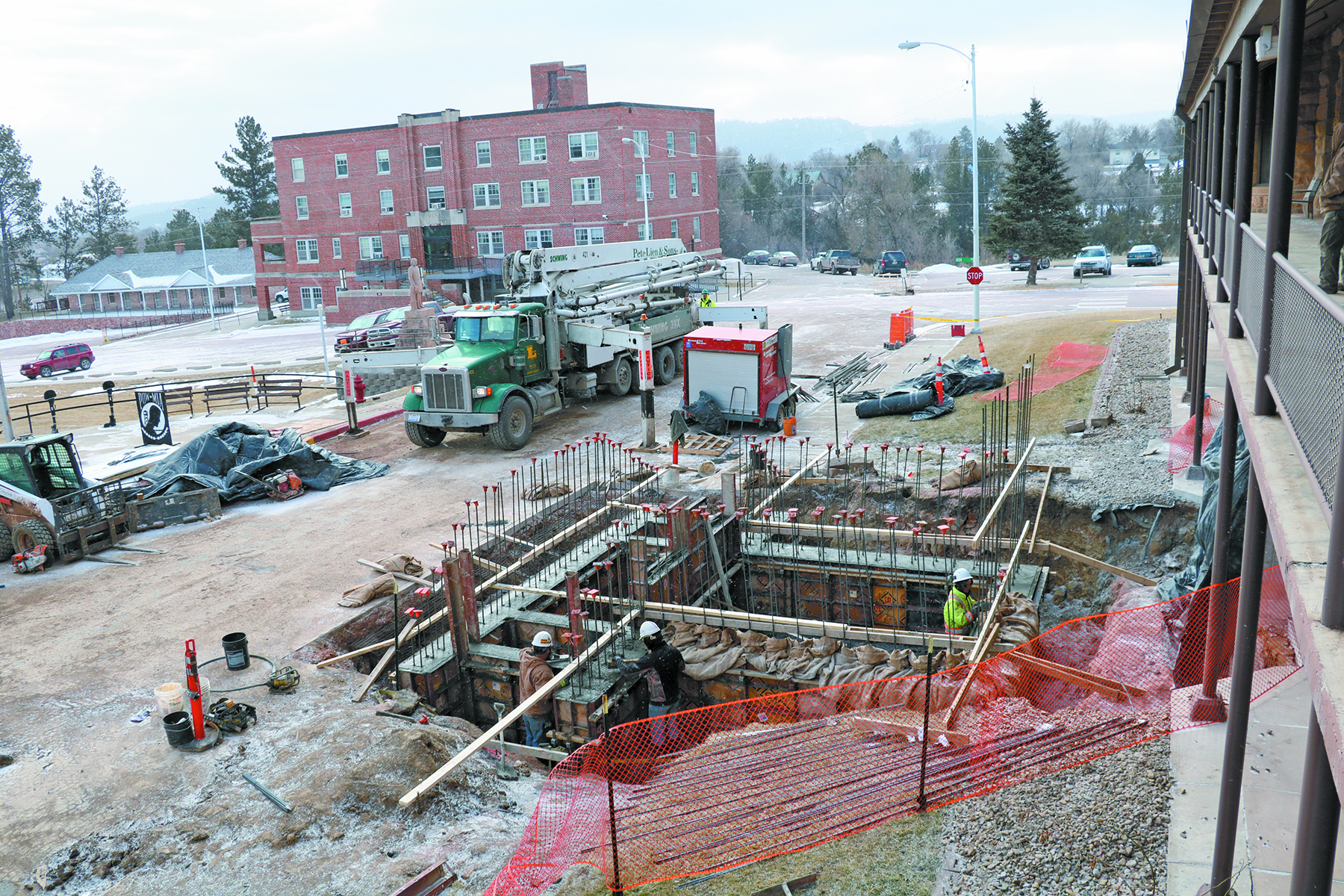 Workers are currently building a new egress system for the State Home’s Building Two that will serve a vital function to the building’s new apartments while also bringing back one of the building’s original architectural features. The project is slated to be completed by the end of May.

HOT SPRINGS – On Jan. 13, 2016, residents of the South Dakota State Veterans Home in Hot Springs moved into the new 144,000 square foot Michael J. Fitzmaurice Building. The transition of ‘the old into the new’ wasn’t the only thing that transitioned at the time, according to Tom Inman, Physical Plant Manager II of the State Home.

“The operation of the facility also transitioned to accommodate culture change,” Inman said. “Culture change is a philosophy that seeks to move nursing homes from the restrictive institutions of the past to a vibrant community of older adults. The focus of culture change is to reinvent the nursing home so that the dependency and deterioration that seems almost inevitable after admission is replaced by resident growth, creativity and a vastly improved quality of life.”

The State Home operates on a combination of funding from the State, the Veterans Administration and resident rents. It offers Independent Living, Nursing Care and Special Care for Dementia. There are also onsite medical services in family medicine, psychology and psychiatry, pharmaceutical services, physical therapy and rehabilitative services, social services, financial and cashier services, barber, post office and transportation to offsite medical appointments. Each room is furnished with a bed, chair, TV, nightstand and armoire. Bedding and personal laundry services, family style meals and a home-like living environment.

But in addition to now having a state-of-the-art facility and being on the cutting-edge of quality residential and medical services, the State of South Dakota has also shown a commitment to not only preserving the past but also keeping it functional.

Since 1889, the identity of the State Veterans Home – and in many ways the town of Hot Springs as well – has been a four-story sandstone building known today as Building Two, or also the Joe S. Kern Building. The building cornerstone was laid on Nov. 5, 1889, and thus its believed by some that this building was the first-ever building owned by the State of South Dakota after earning its statehood on Nov. 2, 1889.

To make room for the new Michael J. Fitzmaurice Building that was completed in 2016, two other structures were torn down, but Building Two remains the jewel of the 198-acre campus, Inman said.

He added, that although many improvements have been done to the building over its 130-year history, the last 10 years have been the most beneficial in keeping the historic building viable for many more years to come.

In addition to the aforementioned completed projects, the state is also currently undertaking a large egress project for the entire building that will somewhat replicate the original stairwell on the front of the building, which was torn down many years ago. The egress system will serve the apartments on the second and third floors while also providing direct public access to the state and federal offices, which include S.D. Game, Fish and Parks, S.D. Arts Council and the State Engineer. This project should be completed by the end of May, Inman said.

In addition, the state will soon also be remodeling the third floor into two 3-bedroom apartments to help keep up with the demand for suitable housing for the State Home’s ever-growing workforce. These two projects together are expected to total approximately $650,000 when completed.

Inman beams with a great deal of pride when he talks about all of the improvements that have been made to Building Two over the years and the state’s commitment to keeping the building a monument to history, while also making it very functional for today’s world. This, he said, will help the make the building self-sustaining through rental income.

Since its beginnings as a home for South Dakota’s Veterans, their spouses and their widows or widowers, the State Home has always been used for housing. So by remodeling Building Two to now be used for staff and guest housing makes good sense, Inman said.

All of the State Home’s current 1, 2, and 3-bedroom efficiency apartments are currently full and have a waiting list for future tenants, which proves the demand for housing is high. In addition to the apartments in Building Two, Inman said his staff has also been preparing other parts of the campus to soon house some Governor’s Homes that are currently located at STAR Academy near Custer. He said he is expecting three homes and possibly a fourth, with a portion located near 25th Avenue on the southeast part of the campus, and the others on the northern end of the campus.

Equally as proud as Inman is about the improvements to Building Two, he is also very proud of the State Home’s Bio-Mass System which burns wood chips and has reduced the facility’s energy costs for heating/cooling by nearly two-thirds compared to the old system. He said despite its $5 million price tag at the time, the Home has already almost paid for the system through the energy savings its has created.

Now, to add to the success of the Bio-Mass System, Inman also announced last week that the State Home will be installing a ground-mounted Solar System on some unused land on the northwest side of the campus. He said that it has the potential of cutting their electrical costs in half, with an approximate 12 to 13-year payback.

Despite often being the person who gets to tell the story of the State Home, Inman is quick to defer credit and attention away from himself.

“This is not about me,” Inman said. “Its about the Veterans who live here and the staff that hugs and cares for this place and makes it special.”

Inman also wanted to send a heartfelt thanks to all of the State Veterans Home’s volunteers.

“Volunteering at the Home is fun and rewarding experience, and we would like to extend the invitation to anyone who might be interested to call,” he said. “Beside our volunteers, we would like to thank all of the veteran’s services organizations, community service organizations and local businesses for your support throughout the years. We know that we would not be where we are today without you.”