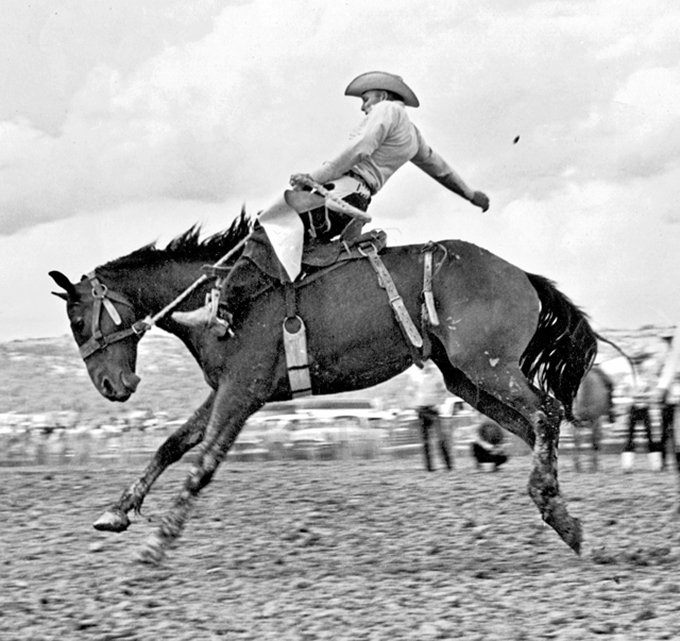 Franklin Manke rides a saddle bronc at the NRCA rodeo in Newcastle, Wyo., in 1958

EDGEMONT – Franklin Manke was rummaging through various items collected and saved by his late mother when he came across a copy of a program for the American Legion Championship Rodeo held in Edgemont in 1953. It took him back to an earlier time when main street business was booming and store buildings held an appearance indicative of the thriving economy of the day. He recalls that what is now The Gun Vault used to be a bank building and at that time there were seven bars in town.

While many contestants listed on the program roster are either deceased or no longer living in the area, a few are still around and eager to recall their adventures in rodeo.

Donald Spencer, now 82, lives 13 miles north of town on a ranch nestled down in a valley of off Elbow Canyon Road. Spencer recently said his rodeo habits had their beginnings when at just 8 years of age he began roping sheep that were under the care of an uncle.

In rodeo, he started off in calf-roping. He recalls that either himself or Franklin Manke got some of the $50 prize money at the 1953 event, which was just prior to his later exploits on the high school level. In high school, he was a roper and a steer wrestler or ‘bulldogger’ as their known as by the old-timers. In 1953, he won the all-around calf-roping at the state high school championship held in Rapid City . He won those same event in Harrison, Neb., and Ardmore that same year. He finished 2nd in steer wrestling at the national high school rodeo in 1953 held in Rapid City.

In 1954, he finished 4th at the national high school rodeo held in Texas that year. He says his current aches and pains remind him of his rodeo days and attributes a share of them to one particular incident where he was bucked off a saddle bronc and landed in a sitting position.

Delmer Slagle, who now resides in Custer, rodeoed on-and-off for a period spanning 50 years. He grew up on a ranch by Newcastle, Wyo., and like many others who entered the rodeo, his interest began when he was a young boy.

Slagle acknowledges his good fortune not to have sustained any broken bones or other major injuries as a result of his exploits in the arena and he attributes this in-part to a relatively short career with bucking horses which lasted about four years. He gravitated toward calf-roping as a less physically toilsome event and was also successful in team-roping where he won six saddles in total and continued to team-rope up until age 77.