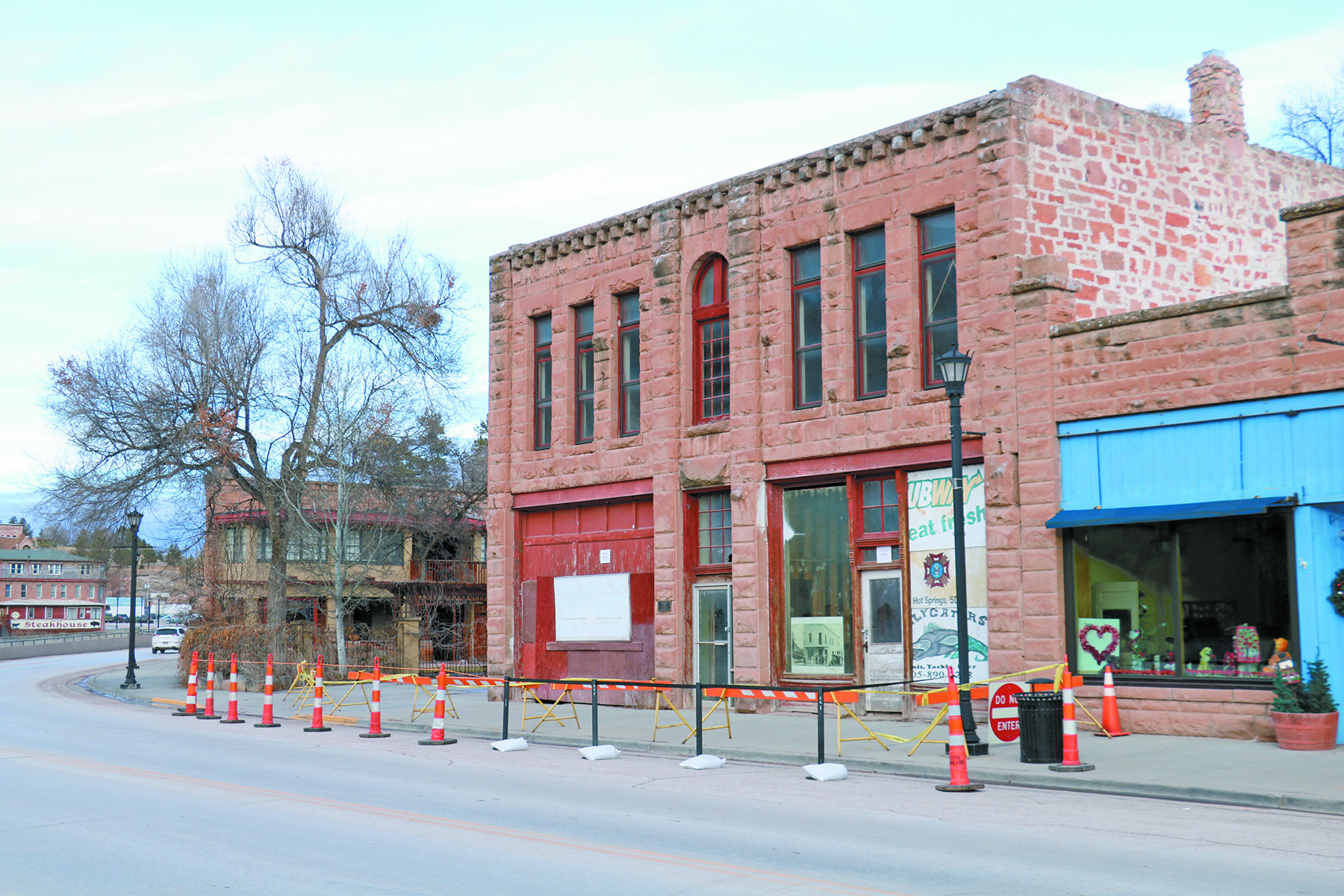 HOT SPRINGS – The condemned Wesch-Oak building at 717 North River Street in downtown Hot Springs was once again a topic of discussion at the city council meeting on Monday, Feb. 3.

Prior to Communications from the Public – when Kara Hagen and KC Caruthers were scheduled to speak about the recently revived “Save Our Sandstone” citizens group – Mayor George Kotti provided a brief update from where the discussion left off at the previous council meeting. He said the final engineers report had been received and was available for public inspection in the City Administrator John Gregory’s office. He also said the he and Gregory had been working diligently on the matter and had recently worked with the Fall River County Sheriff’s Department in issuing an Execution of Judgement in regards to the building’s owners – Hot Springs Citizens for Progress, a non-profit organization which lists Robert Johnson of Arizona as its Principal Officer.

He also said that he had requested the city administrator begin seeking estimates on the cost to brace the facade of the building and to demolish the remainder of the building, per the recommendation of the engineers report. Mayor Kotti said the cost to develop the plans alone totaled $2,000 for demolition and $1,200 for bracing the facade.

Mayor Kotti then said it was the city’s hope to play a role in the process to save at least the facade of the building, but ultimately that it be done by a private individual or citizen’s group that purchases the building.

Following the mayor’s update, Hagen and Caruthers then spoke and explained how the original Save Our Sandstones group – aka, S.O.S. – was started by Beulah Donnell, but that a group of local citizens was reviving the cause to help save the Wesch-Oak, along with all the other sandstone buildings in town that are in need of saving as well. Both also thanked the mayor, city council and city administrator for being open to working together. Caruthers also apologized for how the public’s passion for saving the sandstones may have come across as confrontational at the previous city council meeting.

Hagen said there were at least 60 properties in Hot Springs that had been renovated or restored over the past few years in Hot Springs, which she used an example of how much has already been done by the community. She emphasized how she had often been told how “you can’t do that” or that is “impossible,” but she said a lot of things “seem impossible, until it’s done.”

Caruthers said she has a lot of experience with construction and said the Albertson Engineering report commissioned by the city is only one opinion of the condition of the building. She requested that the city have a structural analysis done by a person specializing with stone buildings.

Following a break in the conversation to allow for four different public hearings on unrelated topics, the Wesch-Oak was brought up again later in the meeting when councilman Bob Nelson asked Hagen and Caruthers if they felt the financial burden of saving the Wesch-Oak building was the city’s or a private group or individual’s?

Caruthers said that was a difficult thing to answer, considering that the building is currently owned by another entity. She said once a means is found to get the property in the hands of either the city or  another group, and some costs were established, it would be an easier discussion to have.

When the Wesch-Oak building wasn’t being discussed, the city council also tackled a number of other agenda items, including four public hearings. The first hearing was for the 26th Street Water Distribution System Improvement District Amended Assessment Roll. A pair of affected landowners – Duane Cruz and Robert Hagen – came the microphone and expressed their frustration for not being given a better explanation for why their shared costs for bringing water to their neighborhood had gone up considerably. Hagen said his had gone from $12,000 to $16,000, based on the letter he had received from the city.

Mayor Kotti explained that the price increase was because the construction costs were higher than anticipated due to the extensive rock in the developed area. While the city was aware of the rock, they were using an experimental “rock saw” to create the trenches. Despite the costs still being lower than traditional methods of chiseling the rock, Mayor Kotti said the costs still exceeded projections and thus the increase to the landowners.

City Finance Officer Misty Summers-Walton said that the soft cost estimates are available in city hall for the effected landowners to see, but she also acknowledged that the city should have sent those out along with the notifications of the price increase, as it would have likely avoided some of the issues expressed during the public hearing.

Later in the meeting, the city council unanimously approved the resolution for the 26th Street amended special assessment.

A hearing was also for a Use Permit on Review for Michelle Erickson who is planning to operate a home daycare at 1446 Clark Alley in Hot Springs, located near Sheridan Street and Scofield Street in the far northeast part of town.

Many questions were asked of Erickson and her husband Ross. While all of the councilmembers and audience members who spoke during the public hearing applauded the family’s intentions to provide a much-needed service in the community, concerns were expressed about the fact that their home is only accessible by an alley.

After much back and forth with audience members and council members, the Erickson’s Use Permit was ultimately passed unanimously by the city council later in the meeting under New Business.

Another Use Permit on Review unanimously passed by the city council was in regards to an RV Park and Campground being planned on 12.5 acres of land currently owned by Quality Real Estate located along the Hwy. 18 Truck Bypass near the U.S. Forest Service.

Todd Wilson, who is planning to operate the RV Park and lease the land from Steve Simunek (owner of Quality Real Estate), spoke during the public hearing where he said the project has three development phases, with the first phase with 20 sites, is scheduled to be completed by the fall/winter of 2020. He said once completed, their plans are to have 80 sites completed with water/sewer and many other amenities traditionally found at other year-round RV parks.

Also during New Business, the council unanimously passed a motion to perform a one-time burning of the brush pile at the city’s’ landfill, following the recent go-ahead given to the city by the state’s DENR. Mayor Kotti said the date in which they burn will be dictated by weather conditions and may come very soon. He said it will be done under the direction of the S.D. Division of Wildland Fire and other experience city personnel.

During his Public Works Committee Report, Councilman Nelson said after this one-time burn being recommended by the committee based on its cost efficiency, the city will likely development a long-term plan of routinely chipping or shredding the brush on a more regular basis.