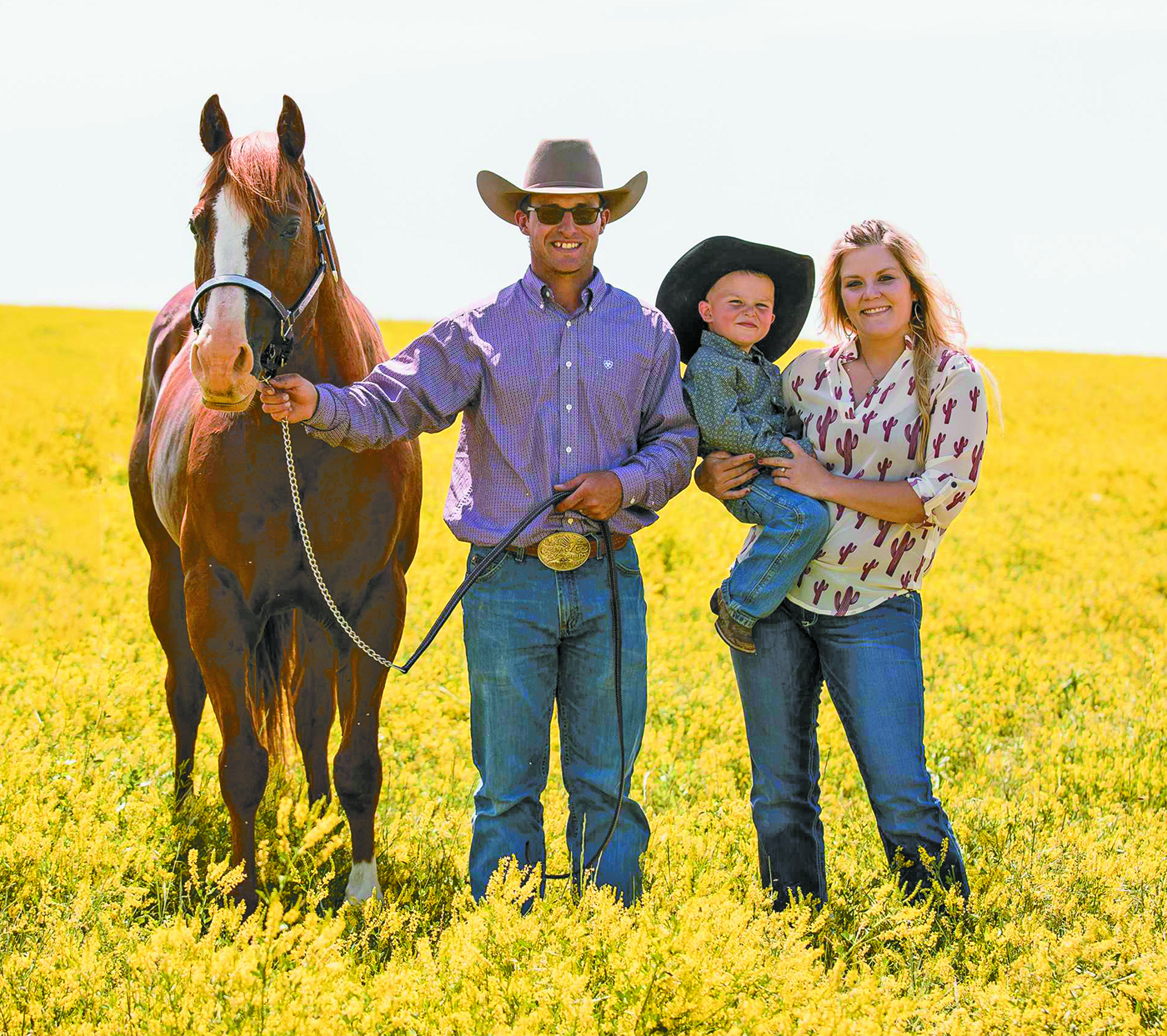 South Dakota’s 2019 Ag Woman of the Year, Megan Harkless, poses for a recent photo with her family, including husband Matt and their three-year-old son Tyce.

OELRICHS – At just 29 years old, the success of Megan Harkless of Oelrichs as a livestock entrepreneur can be credited to her determination to “jump in head first” with any opportunity or challenge she was presented.

And it’s with that spirit that she was named the “Ag Woman of the Year” by the South Dakota Women in Ag at the group’s annual Rural Women’s Conference in Deadwood earlier this month.

Harkless, who was surprised by the honor, was nominated by rancher Avis Jennings for the commitment she has to her job at Fall River Feedyard and being involved in South Dakota agriculture.

“Megan represents SD Women in Agriculture by working endless hours with cattle, horses and people daily. Megan is a very positive role model to women to do what they have a passion for,” wrote Jennings in her nomination form.

The daughter of Russ and Lisa Frasier of Oral, Megan attended Oral School from 2nd to 8th grade, and then chose to be homeschooled for her high school years, which allowed her to also go to her uncle’s ranch in Wyoming whenever she could, while still getting her school work done. In 2015, she married Matt Harkless, and the two have a three-year old son Tyce.

“I knew I wanted to do something with livestock, but it wasn’t until my husband Matt took a job at the White Ranch that I really got the opportunity to explore my options,” Megan said. “Tom (Lori) White and their son Shawn (Tanna) White artificial inseminated (AI) their heifers and had mentioned to me that I should go to school and get certified.

“Needless to say, I jumped in head first at the opportunity and found an AI school put on by Genex,” she said, while adding that once I completed the course, Shawn turned her loose on 200 head of heifers.

“Now to put this into perspective, any normal rancher would have been a bit more hesitant about just turning me loose, but not Shawn, he let me get right to it. Which I am forever grateful for, not very many get the opportunity to get out of school and right into cows,” Megan said.

After about a month or so, the Whites mentioned to Megan that she should go back to school and learn how to ultrasound cattle.

“Once again, I jumped at the opportunity and yet again they turned me loose on their cows/heifers. I will forever be grateful for the opportunity the White Ranch gave me, they have had a big part into helping me get to where I am today,” Megan said.

With business going well, Megan then created M&M Cattle Services, where she ultrasounds and artificially inseminates cattle. A couple of years later, she then also became a sales representative for Genex, a cattle semen company; and also later for Ramona Warehouse, a horse feed and mineral, as well as smartlic and horselic tub company –– all of which she said, fit hand-in-hand with what she was already doing in her business.

With business continuing to grow and gain even more momentum, she then got a call from Bart Krautschun at the Fall River Feedyard near Hot Springs, about a year ago.

“The Feedlot wanted to start ultrasounding cows to see what was bred over six months to evaluate costs, profits, and other things,” Megan said. “For those that don’t know, aging can be real tricky after the calf drops past the pelvis of the cow. We talked a few times on the phone, and in between I was making many calls to veterinarians, instructors, and ultrasound companies with my question: Can this even be done and if so how can I do/train to do this?”

Megan said she was laughed at, told there is no way, told it would never happen, it couldn’t be done and so forth.

“Bart called me again and we agreed to at least give it a whirl and see what we could do,” Megan said. “Little did I know that what everyone was telling me was impossible we made possible. It took quite a few cows and many hours of watching videos, reading articles and studying to better myself, but we have drastically decreased the calves being born at the feedlot.”

After seeing her hard work and dedication to her profession, the Feedyard’s Krautschun has become a big fan of Harkless.

“Megan is one of the most dedicated, hardworking individuals I know,” Krautschun told the South Dakota Women in Ag about their award winner. “She continually strives for perfection. She is always watching training videos, on the phone with her ultrasound machine supplier, and trying to improve her abilities as an ultrasound technician.

“In my eyes, Megan has done the impossible,” added Krautschun. “She is doing what everyone said couldn’t be done. Megan has decreased the calves born in our feedlot by over 95 percent. To put a number to this, calves born before Megan started this project were approximately 5,000 per year, and calves born after she started ultrasounding are less than 200 so far this year. She is an amazing individual with a work ethic that is uncommon in any person today.”

When recently asked what winning the award means to her, Harkless said she was is still pretty shocked to have received it.

“To be awarded as the South Dakota AG Woman of the Year, means the world to me and I hope it gives other women the inspiration to go after their dreams,” she said. “I am thankful and honored to receive one of the best awards that woman in the Ag Industry can receive.”

When asked what advice she has for other women about chasing their dreams, Harkless said to keep chasing them and don’t give up.

“Whatever you do never give up,” she said. “My road has had many bumps and mountains along the way, but why spend your life making someone else’s dream? Make YOUR dream, it doesn’t happen overnight. You have to remember people will throw stones at you, but don’t throw them back. Collect them all and build your empire. You CAN make the impossible, possible. Keep pushing, keep fighting, and keep moving forward. But my biggest advice is judge no one, just work on improving yourself. Everyone is fighting their own battles, so don’t judge someone just because they sin differently than you.”

She also sent a heartfelt thank you to everyone who has ever helped her.

“Unfortunately way to many to list, but without you I wouldn’t be doing what I am passionate about. So to my parents, family, teachers/instructors, bosses, clients/customers, and my peers thank you. Thank you so much.”