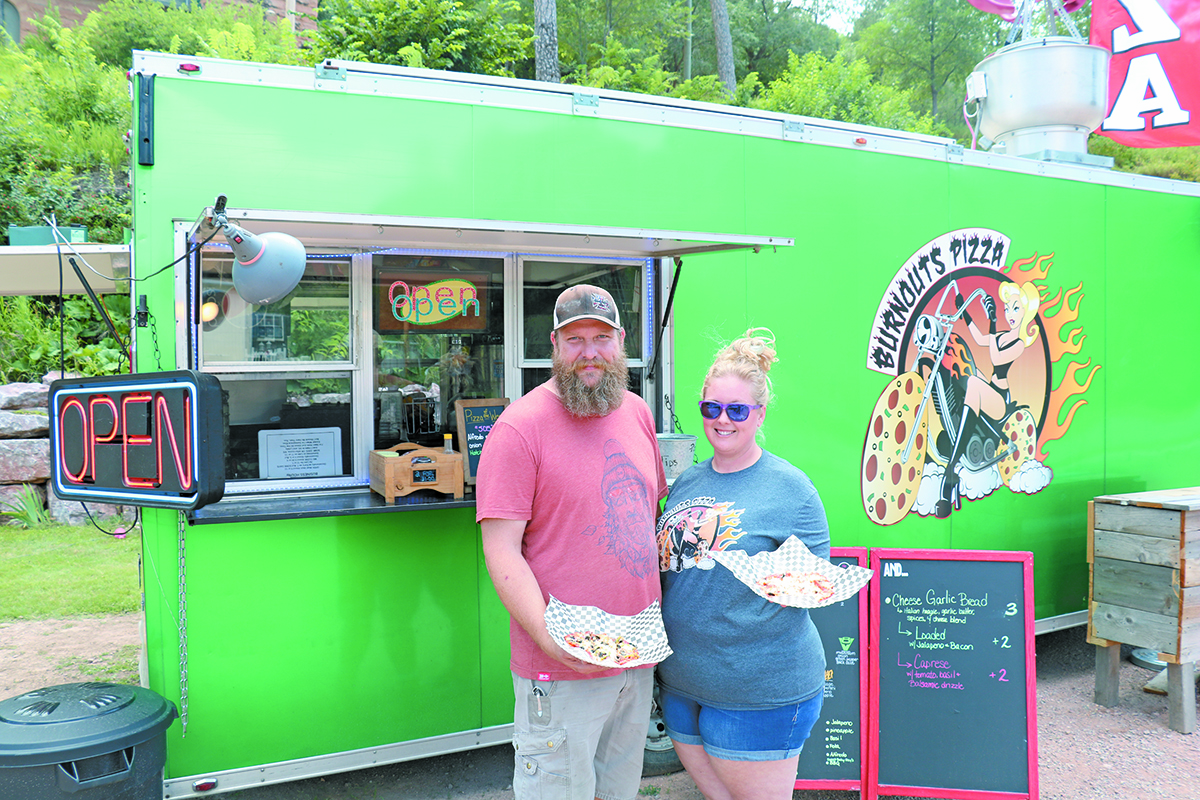 Burnouts Pizza owners Shawn and Ashley Miller pose for a photo last summer in front of their mobile kitchen, shortly after opening for business in Hot Springs on a lot they have been renting for the past 14 months near Kidney Springs. The Millers are currently awaiting a decision by the City of Hot Springs determining if they are considered a ‘permanent business’ or a ‘transient merchant’ which would require a $100 per month license fee.

HOT SPRINGS – What constitutes a “transient merchant” versus a “permanent business” is a question both the City of Hot Springs and Burnouts Pizza is hoping can get panned out in the coming weeks in order to keep the business from taking their food ‘to go.’

The topic of Burnouts Pizza’s ability to continue operating from their mobile kitchen on private property they rent near Kidney Springs has been brought up at the last two Hot Springs City Council meetings, first when councilman Craig Romey gave his Downtown Historic Preservation Commission report at the Aug. 19 meeting, and again last week at the Sept. 3 council meeting. At the most recent meeting last week, Romey’s comments were made during Communications from the Public when he recommended that a committee be formed in relation to “food trucks” and to discuss the fees associated with operating them in the city limits.

The following day, on Sept. 4, Burnouts Pizza posted on their business’s Facebook page that they were pulling out of Hot Springs immediately due to the difficulties they had been facing by working with City Hall while trying to establish themselves as a permanent business that pays rent to operate on a commercial piece of property. The City of Hot Springs then responded later that day on their Facebook page with a statement that said they were “not trying to run Burnout Pizza out of town” and were hoping to resolve the issue in relation to the wording of a longstanding city ordinance.

On Sept. 5, Burnouts deleted their original post and replaced it with one that thanked their supporters for the “hundreds of comments, messages and calls.”

“The response was overwhelming to say the least,” the post stated. “We REALLY didn’t know y’all loved us that much. We have employees that want to work and we have customers who want our product, vague ordinances shouldn’t stop that.” The business then reopened for business shortly afterwards and remains open during the regular hours today.

According to Hot Springs Mayor George Kotti, the issue revolves around Chapter 16 of the Hot Springs City Ordinances where it defines a Transient Merchant as “any person, firm, corporation, partnership, association, or agents of any of them, transacting a temporary business where goods are exposed for wholesale or retail sale at any place in Hot Springs. A ‘temporary business’ is a business established for temporary operation only. A ‘permanent business’ is a business operating more than six (6) months in one place by the same person.”

Section 16-8 of the same chapter, entitled Licenses and Bonds for Transient Merchants, states: “No person shall engage in business as a transient merchant as hereinbefore defined without a transient merchant’s license for each structure, stand, tent, car, vehicle, booth, or place used by any such merchant. A transient merchant’s license fee shall be One Hundred Dollars ($100) per month and no such license shall be issued for a less period than one (1) month. To obtain such license, the transient merchant shall file in the Office of the City Finance Officer a verified application stating his name and residence; description of goods he intends to handle; the date he acquired them, and the place from whence they were last moved. With such application, he must also file a bond to said City, to be approved by the City Finance Officer, in the penal sum of Five Hundred Dollars ($500) conditioned for the payment of any license fee to become due said City, should said merchant continue to operate beyond any time for which he has paid. On filing such application and bond and payment of fee in advance, the City Finance Officer shall issue a license to the applicant to do business at the place described in the application, and for the time for which a license fee has been paid in advance.”

Mayor Kotti said in no way is the city trying to force a business out of town, but that they also must enforce the city ordinances fairly to all those involved, which is why he has referred the matter to the City Attorney along with the Admin/Finance Committee, who he hopes will be able to resolve the matter so that it is a win-win for both sides.

Ashley Miller, who owns and operates Burnouts Pizza with her husband Shawn, said the issue has been a concern of theirs since they first set up shop in the community 14 months ago, which is why she has been working with City Hall since the beginning.

She said they continued to do that until last November or December, which is when they were then told that they no longer qualified as a transient merchant, since they had been in the same place of business for six months.

Ashley said they didn’t hear anything more from the city about the matter since January of this year, but after they chose to temporarily move their mobile kitchen to Sturgis for the motorcycle rally this past August, they were told that they were once again considered to be a transient merchant and required to pay the $100 per month fee.

Under that same reasoning, Ashley said any business that utilizes a trailer or a vehicle to offer their services in a mobile fashion, or closes their seasonal business for more than a couple of weeks, could be considered a “transient merchant.”

“All we’re asking is to be treated fairly,” Ashley said, as she indicated that there are a number of businesses in Hot Springs who may fall into the transient category and not even realize it, under the current interpretation of the ordinance.

Both Mayor Kotti and Ashley Miller said that any previous concerns about their business not complying with requirements of the Downtown Historic Commission are a non-issue at this time and were ironed out in a meeting last fall. Ashley said the property along Minnekahta Avenue where they are operating never had a historic building located on it and thus does not need to meet historic building requirements. Kotti also said that the historic commission and the other businesses in the historic district recognize the economic benefits of having food businesses like Burnouts Pizza in the community and are not opposed to their presence.

When addressing comments describing their business as simply a “food truck,” Ashley said a significant difference between them and most “food trucks” that operate in bigger cities is that they are selling their food on public streets and sidewalks. Burnouts on the other hand is located on a private, commercial lot which they rent, just like most all other permanent businesses in Hot Springs – which may or may not be open 52 weeks of the year, she said.

Kotti added that the situation is “unfortunate, and I don’t like to see it,” but he is hopeful that a solution can be found, which will include looking at how other communities have handled similar situations.

“We want to do everything we can to support businesses,” Kotti said, adding that they will also be looking at their related ordinances to make sure that they are business friendly and provide a positive atmosphere for businesses.

Kotti said the Admin & Finance Committee will be discussing the matter at their next meeting on Monday, Oct. 7, and the city council would not be taking any action until they get a recommendation from that committee, which won’t happen until the Oct. 21 meeting at the soonest. The public is welcome to attend the Oct. 7 meeting and can also provide input during Communications from the Public at any of the regular city council meetings, which are held the first and third Monday of each month at the Mueller Civic Center.