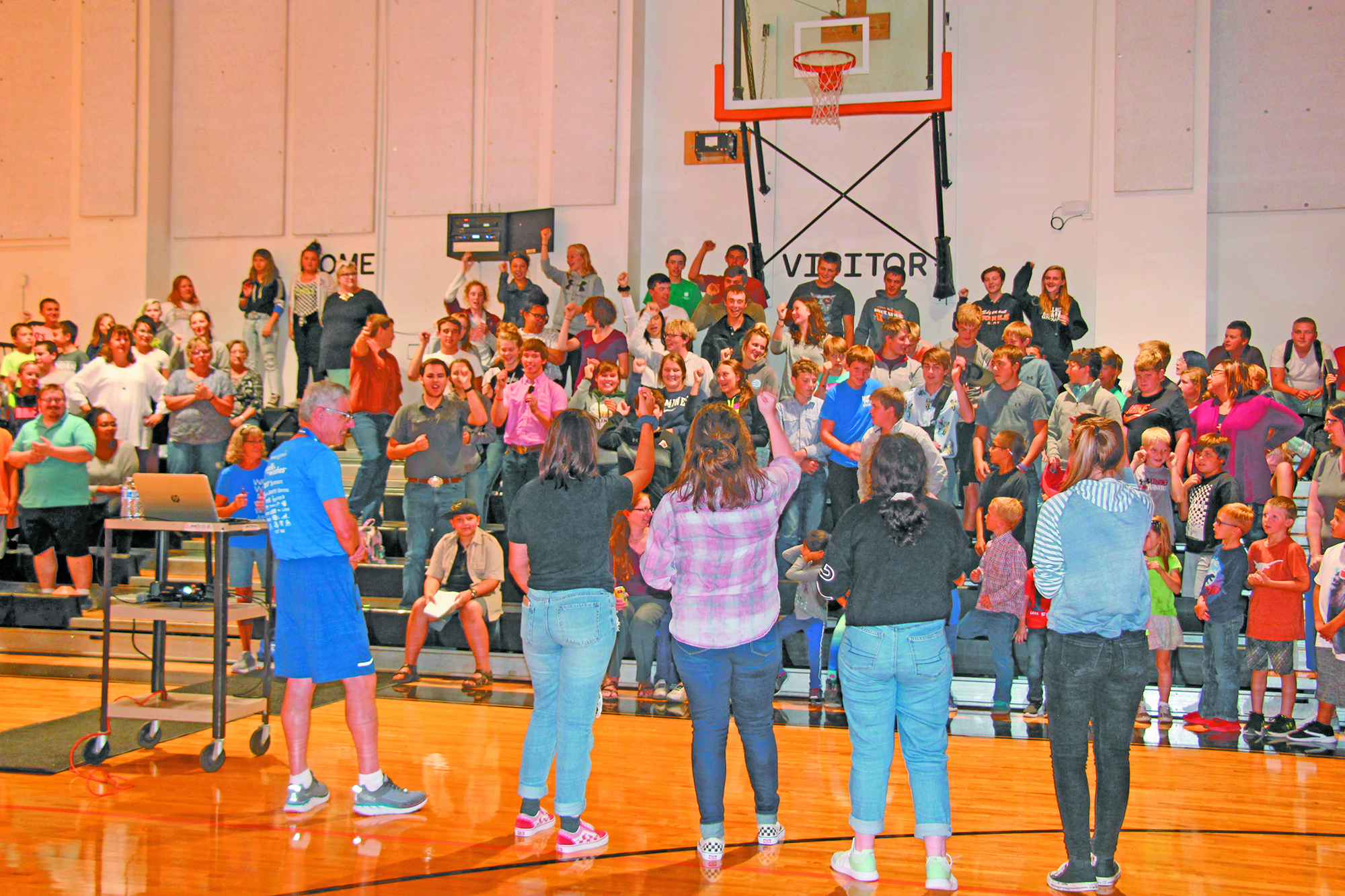 Schneider who joked about being the Cheerleader Advisor in Edgemont more than 40 years ago had the Edgemont Cheerleaders lead the student body in the Mogul Pride during an assembly this past Monday, Sept. 9.

EDGEMONT— Jim Schneider, who began his 41-year teaching career at Edgemont School from 1973 to 1975, completed his goal of running 109 miles through the Black Hills to raise money for Minnesota Make-A-Wish Foundation, on Monday September 9 at 12 p.m.

Schneider started the trek in Deadwood on Sept. 3 ending in Dumont. By the end of day two on Sept. 4 he arrived at Mystic. Schneider said this was the hardest day due to the elevation, 90 degree heat, and uphill climb. Day three on Sept. 5 he ran from Mystic to Burlington. Day four, Sept. 6 he finished at Harbach. Day five, Sept. 7 he passed through Custer Spur and White Elephant to Pringle. Day six, Sept. 8 he continued his run to Minnekahta. And the last stretch on day seven, Sept. 9 led him into Edgemont.

“It was a very special experience finishing my race where my teaching career began over 40 years ago,” Schneider said.

After six days and 109 miles he ran straight into the arms of his wife Patti who he says has been his greatest cheerleader, present at every race he has ever ran.

“I couldn’t have done this without my wife Patti. She hasn’t missed a single race and is willing to follow me around in the car and come get me when I get turned around,” Schneider said in warm regards of his wife.

Upon arriving in Edgemont Jim and his wife ate lunch at the park and then headed over to the school so Schneider could take a shower and get cleaned up before speaking to a gymnasium full of attentive students, teachers, and faculty.

“It’s nice to be back to see how the school has changed and the positive improvements,” Schneider remarked about his experience of being back to the same school where his career begin. Joking that there was a good possibility he has taught some of the students grandparents.

Schneider spoke on the importance of setting long term and short term goals, making a bucket list and following through— explaining that running the 109 mile Mickelson Trail was a dream that began five years ago. He started small 10 years ago with a goal of running three miles after being inspired by his daughter.

“When I watched her run, I thought, ‘If she can run 26.2 miles, I should be able to run three miles,’” Schneider said.

He then completed a 5K, training indoors on a treadmill throughout the cold winter months. After completing the 5K in April of 2009 he began training for a 10K, followed by a half-marathon and a full-marathon, followed by the King Turkey Day 10K in September of 2009.

Although Schneider didn’t begin running until he was 60 years old, he explains that running for the last 10 years has been a rewarding hobby for him in spite of facing various ailments along the way— including hip inflammation, a blood clot in his lung, and meniscus tears.

After running over 16 miles the final day of the 109 mile trek he still found the energy to speak at the school and participate in a fun 100 push up challenge against some student athletes, beating students more than half a century younger than him and completing 100 push ups without being out of breath or barely breaking a sweat.

“There are days I definitely don’t feel motivated to run. But when you push past your feelings you’re gonna feel better. Not in the moment, but after I get home and shower I feel relaxed and energized. Take care of your bodies and stay active. It releases stress and makes you feel great.” Schneider said, encouraging and challenging the student body.

The latest goal was something Schneider said he had never done before and wasn’t entirely sure his body would be able to handle it. His purpose of raising money for Minnesota a Make-A-Wish kept him motivated, raising over $1,900 of his $10,000 goal. While not the full amount he had hoped to raise Schneider was in very good spirits about all he accomplished.

“I chose Make-A-Wish thinking it would help a child’s dream come true, because that child has already suffered so much. I know this still goes along way toward making that dream a reality and I’m thankful for everyone who has given.” Schneider said.

Schneider has further ties to Edgemont saying his uncle Lawrence Kopriva was publisher of the Edgemont Tribune in 1950. He remembers fondly visiting Edgemont as a kid and playing on the canons that still sit at the city park.

Schneider enjoyed his time in Edgemont and is looking forward to resting and then preparing for the Twin Cities Marathon on Oct. 6.

“Don’t destroy your good name.” Words his father often shared with him Schneider generously passed on to students of Edgemont.

“Make sure you respect everybody the same. There is no difference between the teacher and the janitor. Most of  them care a lot about you and deserve your respect and appreciation,” he added.

He ended his time with the students wishing them a wonderful school year and allowing them to take turns visiting the dozens of medals he had on display from races he finished or won. Echos of applause erupted in the gymnasium as students stood and applauded.