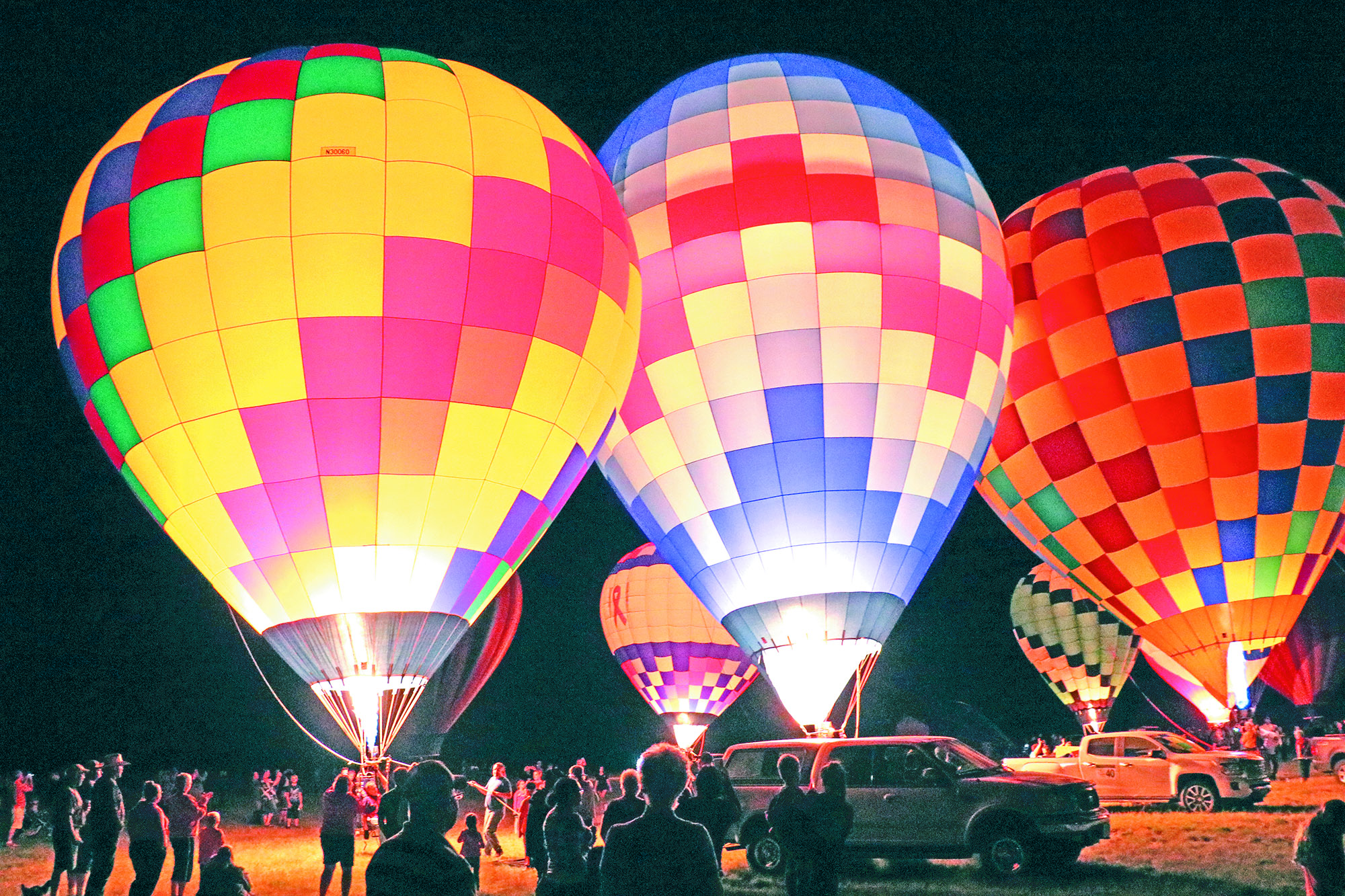 It’s estimated that around 2,500 people attended the Night Glow this past Saturday night, Aug. 24, at the Hot Springs Municipal Airport.

HOT SPRINGS – By all accounts, this past weekend’s 4th annual Fall River Hot Air Balloon Festival, put on by the Hot Springs Area Chamber of Commerce, was a high-flying success, based on the number of people who attended and feedback from the participants.

According to Chamber Director Olivia Mears, they are estimating that a record 2,000 people attended the Saturday morning launch at the Hot Springs Municipal Airport, with about 2,500 people attending the Night Glow on Saturday night. The estimates were based primarily on vehicle counts of over 1,000 at both events. The Night Glow, which was delayed slightly past dusk due to wind, had to utilize overflow parking on the south side of the airport driveway.

Attendance for the launch on Sunday morning, which was delayed slightly due to higher than ideal winds, was considerably smaller. However, those who were aboard balloons on Sunday were treated to a float over Angostura Reservoir, thanks to air currents from the northeast. On Saturday, the balloons floated the opposite direction with a flight over the Cheyenne River with most balloons touching down north of Oral.

A total of 22 hot air balloon pilots and their balloons took part in the festival this year, which was up by about four balloonists from last year. They came from as far away as La Quinta, Calif., and Table Rock Lake, Mo., and also as close as right here in Hot Springs, where the community has three hot air balloon pilots. Local balloonists include Petra Wilson, who serves as the “Balloonmeister” of the event, along with Rich Olstad and Rodney Watts.

The California-based balloonists, Tom and Kelli Keller, said they were a late addition to the festival after meeting Wilson earlier this month at the 2019 US National Hot Air Balloon Championship in Scottsbluff, Neb. For Kelli, the Fall River Hot Air Balloon Festival was an opportunity to fly in her home state, after growing up in Rapid City.

Another well-traveled balloon participating at this year’s event was the Freedom Flight V balloon, piloted by Luke Cesnik of St. Cloud, Minn. The POW/MIA balloon was taking part at this year’s event thanks to the sponsorship of the Hot Springs American Legion and McGas, based out of Sturgis but who also own Dakota Propane in Hot Springs. Local Legion member Rick Rowe’s stepson Graham McPherson operates McGas, and along with his other stepson Larry McPherson, both attended this past weekend’s festival.

The Freedom Flight balloon has special meaning to the McPherson family because of a family member, Larry Zich, who is a Missing In Action soldier from Vietnam who was ultimately declared dead on Nov. 30, 1979,  from a helicopter air casualty over South Vietnam.

Rowe said his stepson Larry McPherson, who had the privilege of riding in the Freedom Flight ballon on Saturday morning. was named after Larry Vich.

In addition to the popular events at the Hot Springs Municipal Airport on Saturday and Sunday, Jo Schroeder with the Hot Springs Chamber said all of the downtown events were also well attended, including the Kids Zone Inflatables and vendor booths in Centennial Park, as well as the sidewalk sales and live music in the downtown businesses.

Schroeder said the event proved to draw people from throughout the region, as informal polling of attendees saw the vast majority of people attending all of the events coming from Rapid City and other towns in the Black Hills, in addition to Hot Springs.