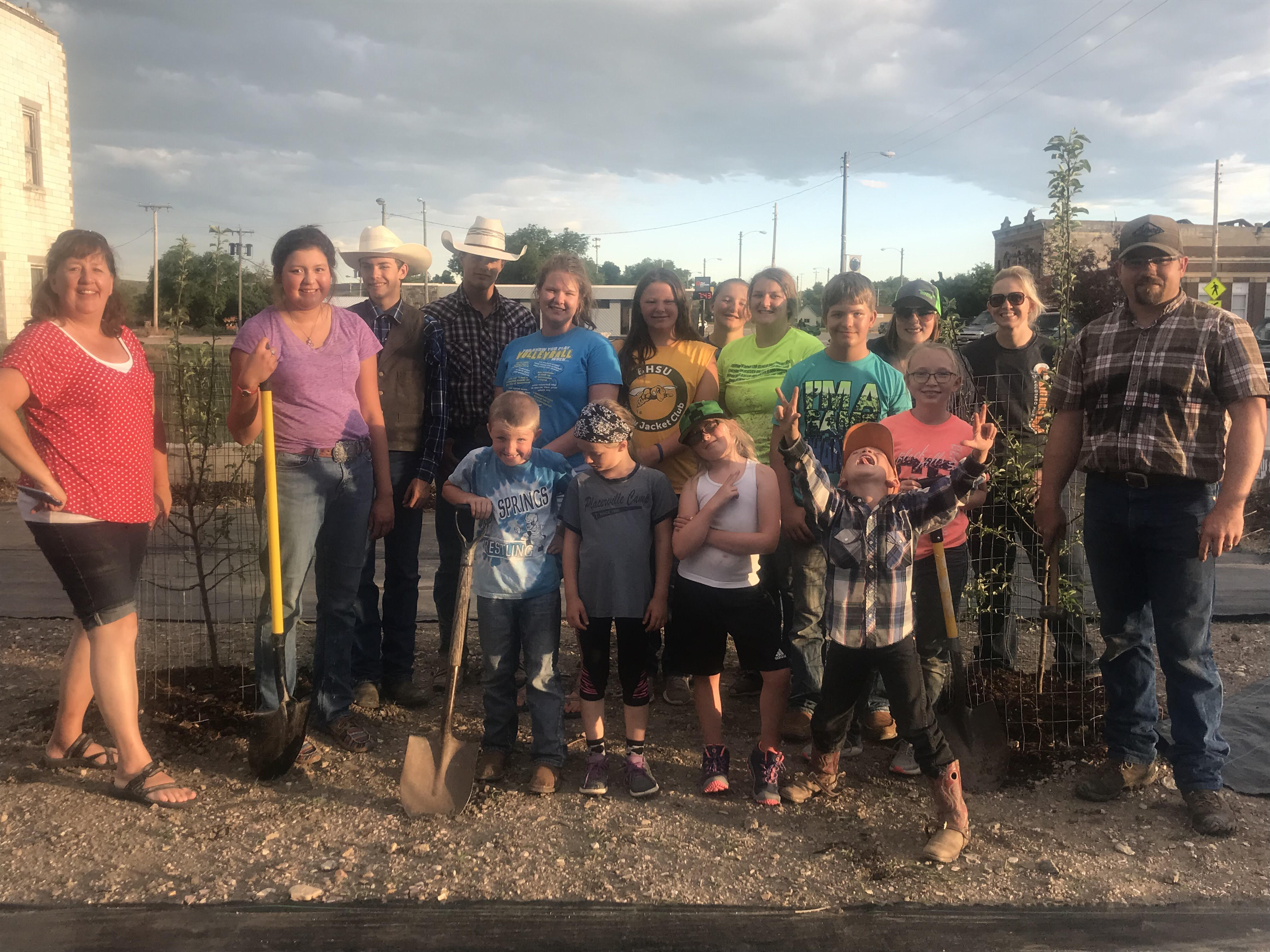 Several of the volunteers who helped create the downtown Orchard in Edgemont pose for a recent photo.

EDGEMONT— A project 4-H has been in charge of for six-plus years on Main Street went from maintaining what was, to taking a big leap of faith into the unknown with the planting of an orchard back in June.

Katie Brunson, Cheyenne Rangers Leader Coordinator for the 4-H, began seeking funding opportunities in hopes of expanding ideas and seeing what the options and possibilities were available for the group to do.

After receiving land granted to the 4-H, with the hopes they would have an idea that could help beautify Main Street, the idea of an orchard was created.

They already had been maintaining Main Street across from the Post Office for several years, but needed something fresh. They discussed turning that into a strip of orchard shrubs or trees, which then led to the area located south of Nuts and Bolts quilting shop, for a larger orchard to be designed.

After searching for grants, Farm Credit Services awarded the project a $2,500 matching grant to make the dream a reality. The Cheyenne Rangers 4-H Club will oversee the project for the next 10 years learning valuable lessons that will not only beautify but benefit the town of Edgemont for years to come.

The dream started to become a reality following the approval of the grant.

Jerry and Earleene Kellogg, who own Nuts and Bolts, donated the site for the orchard, and many volunteers worked tirelessly to get the orchard up and going.

The trees were a matching part of the grant from the Fall River Conservation District. The kids chose what they would like in the orchard after a lot of time was spent researching the zones and making sure the trees students picked would thrive in a Zone 3 area of growth.

The goal behind searching for fruit trees was to teach students to become experts at how to plant them, identify them, use their fruit in pies, jams, jellies, and proper techniques for harvesting the fruit. Their hope is to share with other 4-H groups in the county, completing some countywide workshops, and selling some of the at the local Farmer’s Market.

The 4-H had an appreciation meal for each large donation. Those who made contributions were given free community theater tickets with a steak meal, homemade pie, a picture of the kids in the orchard, and a thank you card.

Plans are underway this week for mulching the whole ground. Now that the fair is over, Brunson said that each kid that made a stepping stone plans to donate it to the walk path of the orchard.

They had a hydrant put in permanently and Trotter Trucking is paying for their water bill every month and each 4-H family signed up for 1 week rotations on watering.

Brunson said they already have green grapes and she plans on juicing crab apples for a lesson in the future on harvesting fruit and how to use them. Starting with apples.