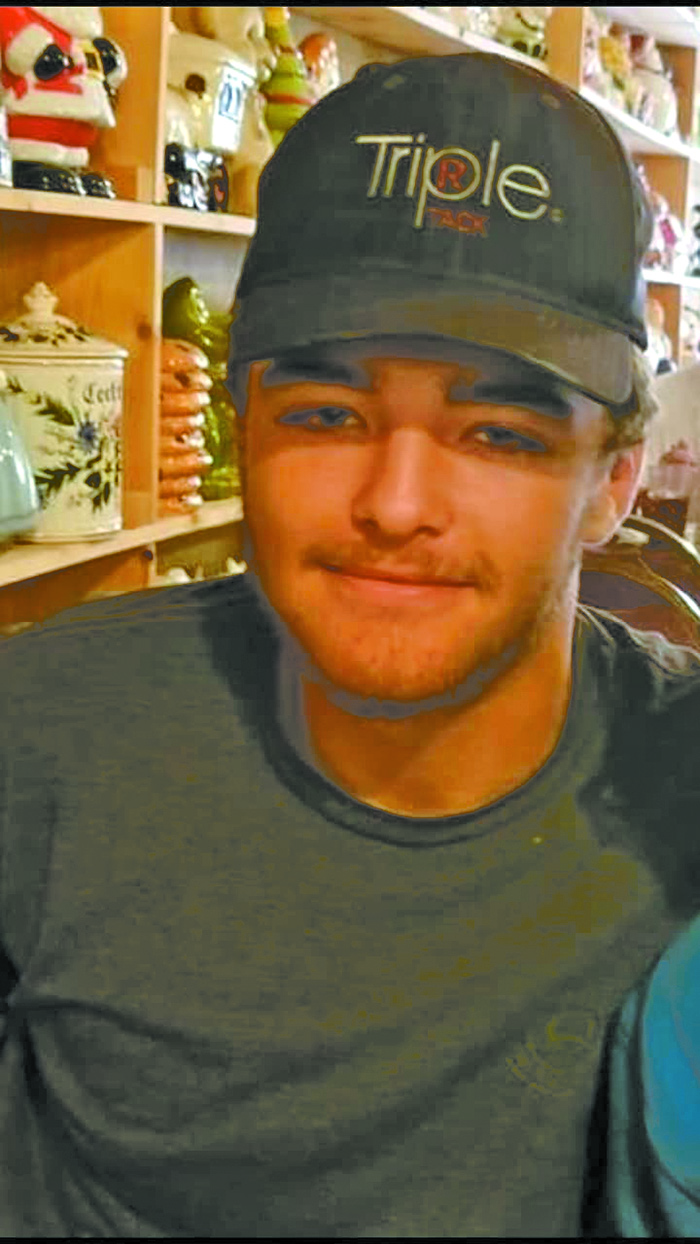 HOT SPRINGS – Placed inside the memorial folder at the funeral for 17-year-old Clay Schnose, this past Saturday, July 27, was a blank piece of paper.

Officiant Justin Trent, a longtime and close friend of the Schnose family, told the more than 500 people in attendance at Hot Springs High School’s Bison Center that the paper was for them to write their favorite memory of Clay on, and then leave it for the family as they exited the gymnasium at the conclusion of the services. Justin said the gesture would help Clay’s mom Kim and older sister Mykelsi, and other family members, learn more about how their beloved “Clayman” touched the lives of all those who knew him.

Following a day that included the funeral, a luncheon at the American Legion and then a social gathering later that night at The Office in Oelrichs, Kim and Mykelsi finally had a chance to read through some of the comments on the pieces of paper by Sunday evening.

One of the stories that stood out to Kim, she said, was from Clay’s schoolmate, Maggie Jamieson, who described a classroom moment when Clay once portrayed a character similar to the one from the television show The Office. Kim said Clay loved that TV show and had watched all the seasons more than twice. “Maggie told it so well, I could watch it happening in my mind (as I read it),” Kim said.

Maggie’s handwritten memory on the piece of paper stated: “In our sophomore Honors English class, we were asked to write comedies. The idea was to create a character and put them in a situation that would make them uncomfortable. Clay made a character similar to Dwight from The Office. When the day came to share our stories, Clay made his two page story last about 10 minutes. He could only read about 10 words at a time before taking a break to laugh. By the end, we were sitting in a circle laughing and crying. No story made us laugh as hard as his.”

‘Laughing and crying’ was in no short supply again this past weekend as family and friends came together to celebrate and remember the life of Clay Schnose, and also mourn his death.

Up until about a year ago, Clay’s life was relatively normal and productive, as any other young man growing up in rural Fall River County who loved to hunt, fish, rope, ranch and hang out with friends. One significant difference however is that Clay was doing his ‘growing up’ without his father, Bert, who died of colon cancer in 2013, when Clay was just 11 years old.

When sharing his own memories of Clay during the funeral, Officiant Justin Trent recalled a time last summer when he was haying and driving a tractor between fields near Oelrichs. He recalled seeing Clay, while working with his uncle Tom Schnose, coming up behind him on the road. After messing with him a little, Justin eventually let Clay pass him in his tractor.

As Clay drove by and gave him a smile and a nod, Justin said the thought that struck him at that moment was how proud Clay’s dad Bert would be of the young man his son had become – for his work ethic, his kindness and for choosing to carry on the ranching and cowboy lifestyle that Bert loved so well.

A short time after that moment on the road last summer is when Clay began to show symptoms of a rare and mysterious disease that would baffle doctors for the next several months. Originally diagnosed as meningitis in September 2018, Clay and his mom Kim began seeing doctor after doctor in Rapid City, Sioux Falls, Aurora, Colo., and the Mayo Clinic in Rochester, Minn.

With a wide range of symptoms, the most serious were lesions and swelling in the brain, which ultimately earned the diagnosis of Auto Immune Encephalitis.

The excruciatingly long ordeal was a series of ups and downs that included Clay finally being able to come home for 12 days over deer season last fall, before again displaying neurological changes that included dragging his right leg, slurred speech, mental confusion and emotional outbursts.

After returning again to the hospital in Colorado for a few weeks, he was allowed to come back home last December and even started to take some classes once more at Hot Springs High School this past January.

The uplifting moments that took place in the early part of 2019, eventually took a downward turn as Clay was again forced to return to the hospital. There was however still high expectations of hope, as he was accepted into treatment at the Mayo Clinic in Minnesota.

As a promise to her hundreds of friends and family members, Clay’s mom Kim bravely vowed to keep hope alive and keep everyone abreast of his progress by doing frequent posts on Facebook throughout the entire time. Followers of Kim on Facebook often commented about her positive outlook when describing Clay’s situation, but underneath it was becoming more and more apparent that Clay’s condition was worsening.

On the night of July 16, Kim posted on Facebook how glad she was that her daughter Mykelsi and sister Anita Osmotherly were able to come to Rochester and join her by Clay’s bedside. She followed that up a couple of days later with a positive post on the morning of July 18, when she said Clay was doing very well and had met every ‘goal’ that this providers had set for him, after his most recent round of treatments.

“I don’t even know how to start the post off, because there just isn’t an easy way,” Kim typed. “The ICU doctor had a good, detailed conversation with us about what the next few weeks would look like for Clay, post intubation. The disease progressed faster than we understood. Clay looked exhausted. This was a defeating prognosis. After putting a few things together, I realized Clay was done. He wanted to be done. He wanted to join up with his dad and be free from his struggles. I had to respect this. As a family we decided it was time for Clay to be happy and healthy again. We asked the doctor for comfort measures only for Clay.

“At 7:28am. Clay passed away, very peacefully, surrounded by all the love three hearts could muster up! I feel that as quickly as this occurred, that was his sign that he was ready and thankful to be set free.”

Knowing that Clay’s suffering was over and that he was now at peace with his father Bert, the events held this past weekend in Hot Springs and Oelrichs were held as an opportunity for his friends and family to come together in celebration of having been a part of Clay’s life, even though it ended much sooner than anyone would have ever expected.

One of the ways in which his life was remembered in a fun way was at The Office, which was not only the name of his favorite TV show, but also the name of one of his favorite places to hang out in Oelrichs. And it was there, this past Saturday night, where a social gathering was held in Clay’s honor.

Attendees to the gathering were greeted by a sign near the entrance that said, “Sexy Sauce Says PARTYTIME,” which refers to a nickname, lovingly given to Clay by his mother through a spontaneous comment while filming a live video.

“Sexy Sauce came about because last spring Clay had to switch team roping partners when his regular partner (Tristan Hunter) got hurt and was out for the season,” Kim explained. “Clay paired up with David Hartshorn, who rodeo’d for Central in Rapid City. He lived between Hermosa and Rapid City. We were coming back from a practice at David’s place near Hermosa, it was raining really hard and Clay was driving. I couldn’t see the road in front of us but Clay could. For whatever reason I decided to do a Facebook Live video of the weather conditions and then focused my camera on Clay driving.”

“I remembered thinking ‘Damn he is handsome!’ And I just said ‘Sexy Sauce!’ In a stupid voice on the video. Jess Hamar, the owner of The Office in Oelrichs, latched onto that name and that’s what she decided he needed to go by from now on.”

Kim went to explain how the ownership and patrons of The Office had become somewhat of an extended family to Clay, after  getting to know him when her brother-in-law Tom would take Clay in there for lunch while doing ranch work together. The staff there eventually developed a very loving and good-natured back-and-forth with Clay, and when it was time to update their food offerings, Kim said The Office used the opportunity to have some fun with Clay.

“Jess was getting ready to add a new burger to the menu with a ‘special’ sauce, and decided to call it Clay’s Sexy Sauce Burger!” Kim added.

In addition to the many memories and moments of laughter shared in Clay’s honor this past Saturday, another significant fact was that the day was also appropriately being celebrated as the National Day of the Cowboy.

Recognized each year by many western states, the day is held to honor the “Cowboy Code of the West,” which has 10 main points, which include things like: Live each day with honesty and courage; Take pride in your work; and, Always do your best... to name just a few.

When asked which of the “Cowboy Code of the West” points that Clay upheld the most, Kim said they would have to be: “Do what has to be done and finish what you start,” along with “Practice tolerance and understanding of others.”

She said both were true characteristics of her son Clay, which were exemplified in a conversation she had following his funeral.

“I had a young man come up to me at his luncheon and wanted me to know Clay had stuck up for him at school in the past and would high five him in the hallways from time to time. THAT made my heart swell with pride,” she said.