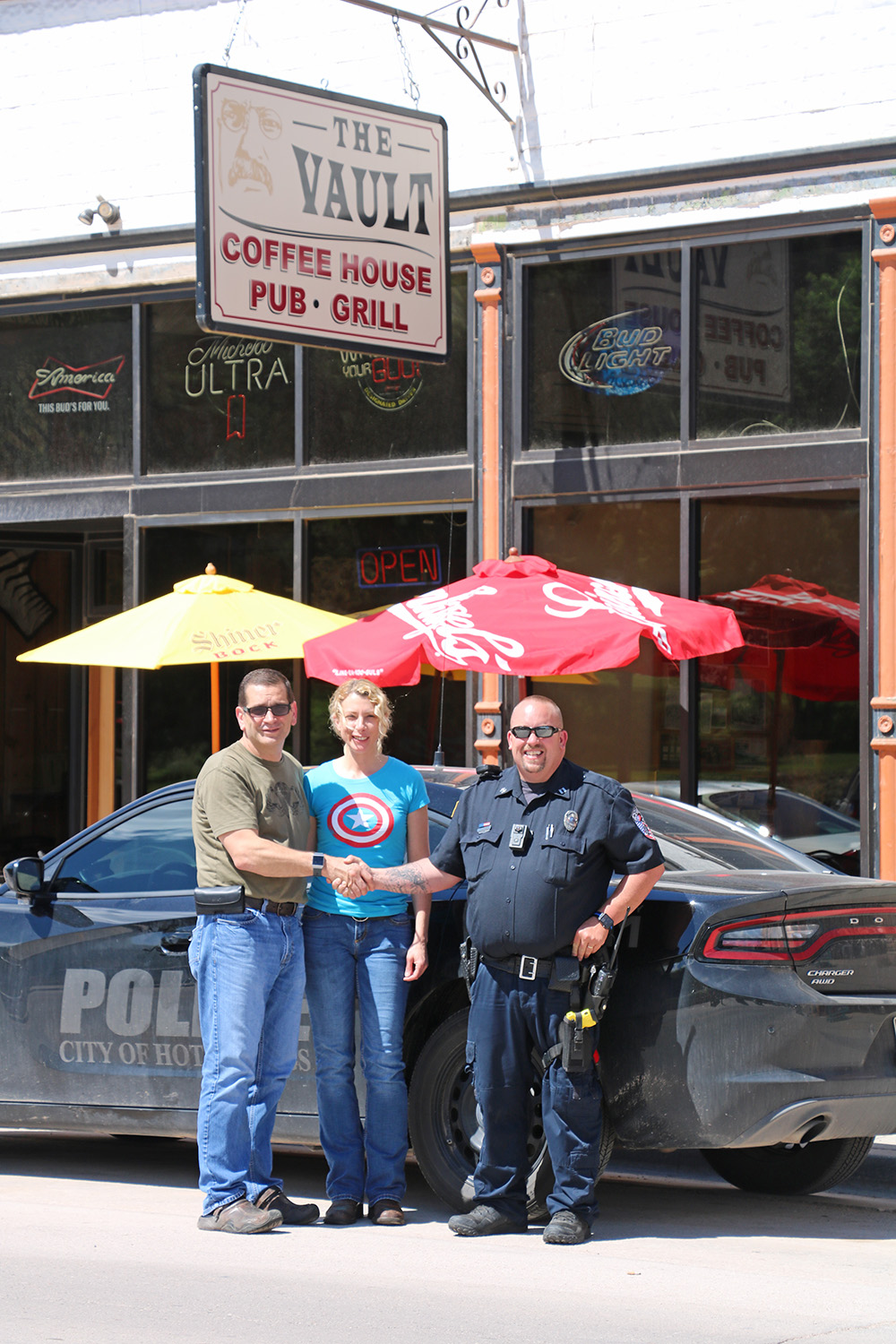 Lynn’s Dakota Mart manager Dewey Fisher, left, poses with Hot Springs Police Captain Bill Wainman in front of the Bison mural next to the Hot Spring Police Department. Lynn’s this year will once again be sponsoring a Root Beer Float Party as part of the D.A.R.E. program graduation.

HOT SPRINGS – The local D.A.R.E. program was re-introduced to Hot Springs 5th grade students in 2016 when now-Police Captain Bill Wainman moved to the community from Gettysburg, where he had been a certified D.A.R.E. officer for three years.

Now coming up on its fourth year in Hot Springs, Capt. Wainman says it continues to serve a vital role in helping to educate local youth on making responsible decisions. He added however that today’s program is far different from the original one that was founded in Los Angeles, Calif., in 1983, specifically for what the acronym stands for – Drug Abuse Resistance Education.

Wainman said today’s D.A.R.E. program stands for much more and is intended to help youth deal with a wide range of issues that could result from poor decision making – not just drugs and alcohol, but also bullying, vandalism, running with the wrong crowd and other topics which could play a negative role in a young person’s path to being a good citizen.

The current program features a 10-week curriculum, which Wainman said will begin in September and entail him going into the fifth grade classrooms for a total of three hours per week (one hour per each of the three classrooms in the Hot Springs Elementary School). It then culminates with a graduation ceremony in November where participating students will walk across the stage of the Mueller Civic Center and receive their D.A.R.E. diploma.

The graduation will also feature a special guest speaker as well as a Root Beer Float Party, sponsored entirely by Lynn’s Dakota Mart of Hot Springs.

This year, The Vault, and owner Greg Gunwall, has made a generous donation of $2,000 to more than pay for all the costs associated with the program, said a very appreciative Captain Wainman..

Gunwall, a Hot Springs native, said he is proud to be the full sponsor of the program as way to give back to the community which helped raise him.

“The best part about this program is getting to know the kids of our community,” Wainman said. “In my 25 years of law enforcement, we truly have the best kids in our town that I’ve ever worked with.”