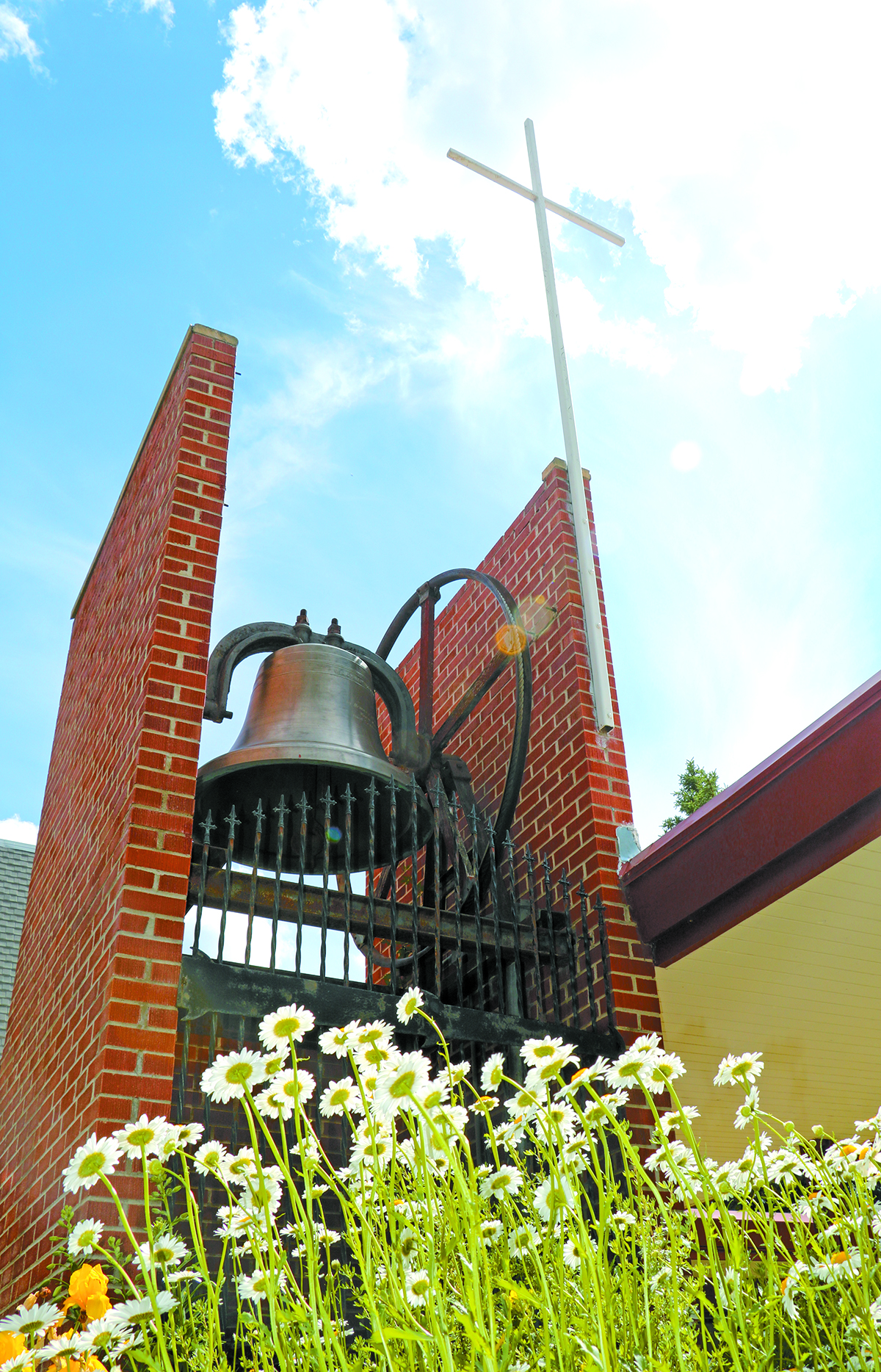 A bed of daisies, growing in front of the bell tower at Bethesda Lutheran Church in Hot Springs, blows in the wind under a sun-drenched blue sky this past Monday afternoon. The church will host a centennial celebration next weekend on Saturday and Sunday, July 6-7.

HOT SPRINGS – The first congregational meeting of the Bethesda Evangelical Lutheran Church in Hot Springs was held in a newly-built church on the corner of 16th and Baltimore Avenue on November 21, 1919. Now, 100 years later, a newer church built in 1958 will welcome current and some former church members, pastors and the community for a celebration of the church’s centennial this July 6 and 7.

“I feel like we have a rich heritage,” said Larry Belitz, who is on the anniversary’s planning committee. He and his wife, Doris, created an anniversary booklet that includes the history and photos of the church.

In 1896 a Lutheran Missouri Synod missionary outreach to this area started in the growing town of Ardmore because Hot Springs (called Oella at that time) had few inhabitants. However, a couple decades later, with the influx of people to Hot Springs for the cures of the healing waters, it was decided to build the church in Hot Springs instead. The property for the church on Baltimore Avenue was purchased for $1,000. Then money for the church building was received from various sources.

Bethesda was named for the healing waters in Hot Springs and the healing pool in Jerusalem. The original building cost about $10,000. Volunteers helped build the church with shovels to dig a basement. One helper came from the town of Cascade with a team of horses and a scoop to dig out the major part of the basement.

From 1927 to 1931 two services were held on Sundays, a morning service in German and an evening service in English. During World War I, German was considered unpatriotic and pro-German, although services continued in both languages until they were suspended when World War II began.

Some of the early church’s treasured keepsakes are still enjoyed. Jacob Maier donated a bell to the church in memory of his sister, Dorothea Maier, that rang for the first time in 1926 to call people to the Christmas Eve service. Later, that bell was moved to the new church and placed atop the front door entry where it is still rung for services today.

Maier also donated a native stone altar to the church in 1924. Some of the rose quartz from the altar is used for the center of the 100th anniversary keepsake crosses that each family will receive. The crosses are made with wood from the original church building. The old Bethesda Church, which was used as the Hot Springs Library for a time and later as a home to an artist, was torn down in 2016.

Another elegant piece of history is still in use at Bethesda. A pipe organ that was built in 1910 for the Hot Springs VA Hospital was sold to the church in 1958 for one dollar. The keyboard keys are covered with real ivory. Also in the church is a stained glass window with the theme “Healing Waters, Reflecting the Son” that was dedicated in 2000. It depicts the Pool of Bethesda from the fifth chapter of the Gospel of John.

In 1953, during the ministry of Rev. Warren Karges, the congregation enjoyed its largest membership of 435. After 30 years of continued growth, it was decided in 1954 to build a larger church. The church was completed in 1958 and dedicated at the Easter services that year. The church has a seating capacity of 400 with an overflow private chapel. Among Bethesda’s congregation is a married couple, Mae, who is 103, and Harlan Niedermyer, who is 101. They have been married 67 years.

“It’s rare to have a church 100 years old that is in the same location,” said Beth Spitzer, who is chairing the anniversary planning committee. Although a new building was constructed, the church is still in the same block as the original church.

In the 60s the church lost membership after the closing of the Black Hills Army Depot when thousands of workers were dismissed.

In 1975, Rev. Kenneth Klaus of Edgemont served as vacancy pastor, then received a calling to full-time ministry at Bethesda. He later became the “Lutheran Hour” speaker.

In the fall of 1979 a Christian school was started with grades K through 3. In 1981 the old Bethesda church, where the school was first held, was expanded.  Later, grades 4 through 6 were added. In 1993 a new 10,000 square-foot addition to the newer church was dedicated for the school.  Currently, the Early Learning Center with 40 children in attendance includes a daycare, preschool and day school for K through 3. The third grade will be added this fall. Marianne Allen is the instructor, with Dr. Ken Palmreuter as principal, who is supported by 39 volunteers.

Another important aspect of the church’s outreach includes a ministry to the Pine Ridge Lakota Sioux under the leadership of the Rev. Gary (Jake) Jacobsen and Larry and Doris Belitz. The church has several ministries, such as the Men’s and the Ladies’ Bible studies,  Bible studies for children, Bethesda Lutheran Ladies and the Women’s Missionary League and a youth group, plus much more.

“The mission of the church is to know Christ and make Christ known through prayer, worship, Bible study and other ministries,” Jacobsen said.

The anniversary celebration will begin on Saturday evening, July 6, with a casual supper of pulled pork from 5 p.m. to 8 p.m. under a large tent that will be set up in the open playground on the Bethesda property. The time capsule that was placed in the original Bethesda church building will be opened.

On Sunday, July 7, the worship service will begin at 9 a.m. at the church. The featured speaker will be former Bethesda pastor and current South Dakota District President of the Lutheran Church Missouri Synod Scott Sailer. The service will include communion. After the service there will be an opportunity to view a looping video of historical pictures in the Bethesda Fellowship Hall. A light lunch will be served under the tent on the playground.

R.S.V.P.s are welcome by calling the church office, 745-4834. The church is located at 1537 Baltimore Avenue. A special offering will go to the Evergreen Lutheran Church at Pine Ridge to replace vans. For further information about the church and the school, log on to the website at: https://bethesdahssd.org.

“We’re looking forward to people coming back for the anniversary,” Doris Belitz said.

“It is with deep gratitude that we look back over the past century here at Bethesda,” Jacobsen said. “The ministry and mission of this congregation, for the past 100 years, has always been to serve and spread the Gospel of Jesus in and throughout this community. Someone once said that a church is not measured in greatness by the beauty of its architecture or the ability of its ministry, but by the people who truly live and faithfully serve that for which it stands.”