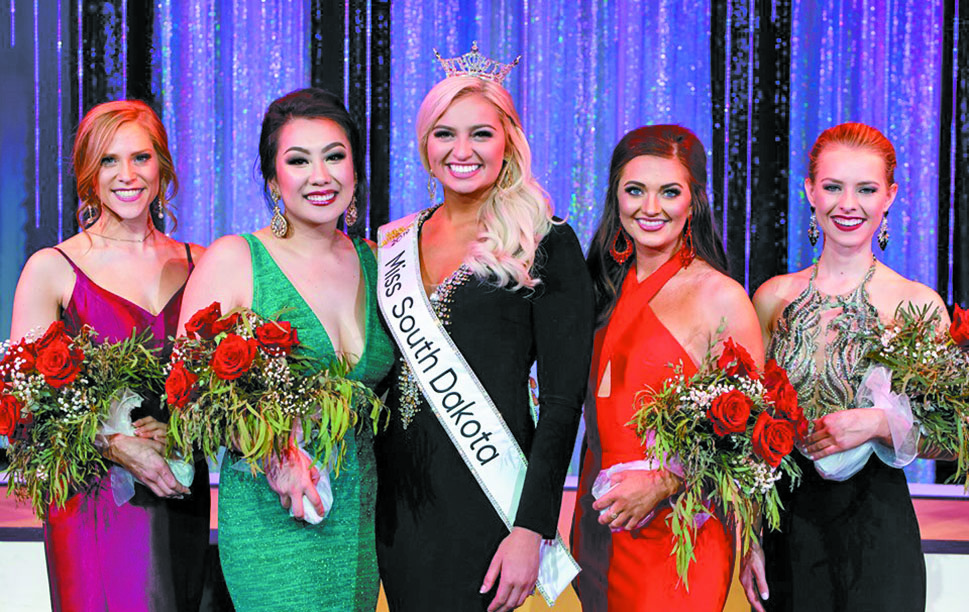 BROOKINGS – Amber Hulse, a 2017 graduate of Hot Springs High School, was crowned Miss South Dakota 2019 this past Saturday night, June 1, at the pageant held in the Oscar Larson Performing Arts Center in Brookings. This was the first-ever year that the Miss South Dakota Scholarship Foundation held its crowning event outside of the community of Hot Springs since its inception in 1947. Both the 2020 and 2021 competitions will return to Brookings as well.

Hulse, who was competing in her third Miss South Dakota pageant, was the first-runner up last year during the final pageant held in her hometown of Hot Springs. Her win marks the fifth time in pageant history that a woman from Hot Springs has been named the new Miss South Dakota. Previous Hot Springs winners include Susan Inman (1971), Pennisue Largent (1981), Amy DeHeer (1985) and Autumn Simunek (2015).

Sioux Falls is the city claiming the most hometown women who have won the title of Miss South Dakota with a total of eight winners, most recently in 2014 with Meridith Gould. Hot Springs however is tied with Rapid City for second-most with five hometown wins.

Amber’s platform is “Operation Overload,” and for her talent, she played “Inner Turmoil” on the piano. She is the daughter of Raymond and Kristina Hulse and competed as Miss State Fair. She attends University of South Dakota and is a political science major.

First runner-up was Annie Woodmansey of Pierre. In addition to her scholarship award of $4,500 for being first runner-up, she was a preliminary talent winner Thursday evening ($1,000), and on-stage interview winner on Friday ($500).

Second runner-up was Carly Goodhart of Sisseton, who took home a $2,500 scholarship, in addition to a $750 STEM scholarship.

Third runner-up was Hunter Widvey of Rapid City, garnering a $1,500 scholarship. Widvey also won a $750 STEM scholarship, as well as the Ray Peterson “Rookie of the Year” award of $500 for being the top-placing first-time candidate.

Fourth runner-up and winner of a $1,200 scholarship was Kaitlin O’Neill of Aberdeen.

Rounding out the top eight semi-finalists were Evy Johnson of Firesteel, Sylvie Larson of Harrisburg, and Elizabeth Hofer of Bruce.

Courtney Remick of Prior Lake, Minnesota, was voted “Fan Favorite” through online voting and received $500 cash.

Sixteen women from across the state competed for the title. All won scholarships.

Hulse will compete at the Miss America Pageant, which will be aired by NBC, date and location to be announced.