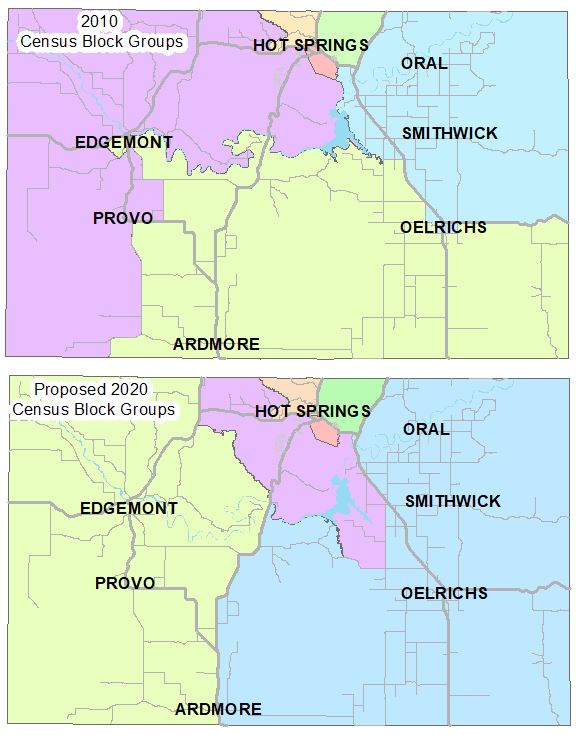 The proposed census block group changes for Fall River County in preparation for the 2020 US Census. The map is courtesy of the Fall River County GIS Office and proposes a more accurate representation of county demographic data for future use by local government officials.

HOT SPRINGS – Fall River County’s Geographic Information System (GIS) Coordinator, Stacey Martin, is proposing a change to county census block groups in preparation for the 2020 Census. The remapping of block groups in Fall River County will more accurately account for demographic data useful for a variety of future projects and grant proposals at a city and county level.

A census block group (BG) is a geographical unit used by the United States Census Bureau. A BG is the smallest geographical entity employed to publish demographic data. A typical BG represents a population between 600 to 3000 people. Fall River County has six block groups to represent its 6700 people, three of which represent the City of Hot Springs.

“Ideally, block groups should contain populations that are similar in their demographics. If, for instance, a block group contains both a low-income area and a subdivision of millionaires, the median income information is going to fall between the two groups, but does not actually represent either population,” as stated on a recent press release from GIS Coordinator, Stacey Martin.

Martin continues: “For grant writing, it is also helpful for block groups to represent populations that receive services from the same community. A block group that contains populations that receive services from [both] Edgemont and Hot Springs is less useful for those writing for grants for [either] one community or the other.”

The new proposed BG map will work to fix a few major issues. Hot Springs will be divided along North  River Street to better balance population numbers between the two groups. In addition, a tract boundary will be moved to Hwy 18 Bypass to prevent the Golf Course Subdivision from being split in two to prevent it from being grouped with the mobile home courts located in south Hot Springs.

The new BG map will also work to better represent county communities. Cascade Road and Angostura Reservoir will be grouped together, preventing the Angostura Lake communities from being grouped with the communities of Oelrichs, Smithwick, and Oral—the latter representing smaller, rural farming communities in need of different services than the vacation/recreational communities near the lake.

Currently, Edgemont is split into two BGs. The proposed changes will do away with that division and group Edgemont and Provo in the same BG, possibly allowing those communities to better access grant monies for future project planning.

“The goal is to get the block groups to more closely match communities and areas, so that when groups are writing grants for the next decade, it’s a little easier. This a problem we’ve had for the last ten years,” Martin says.

Martin states that when she was brought on as GIS Coordinator in 2009, map data had already been collected for the 2010 Census. As her office prepared data for the 2020 Census, she recognized a opportunity to make a difference.

“Having the ability to use current technology to be able to quickly look at this data, meet up with other stakeholders, and talk about what would be best—it [census block groups] affects everyone in the community because our agencies may or may not get access to grants,” Martin says.

Martin maintains that viewing this data can be difficult if not represented in a friendly and locally applicable manner. City and county officials have been working with GIS since 2009 to better use geographic and demographic data to better serve their communities, whether it be for access grants or for other planning efforts.