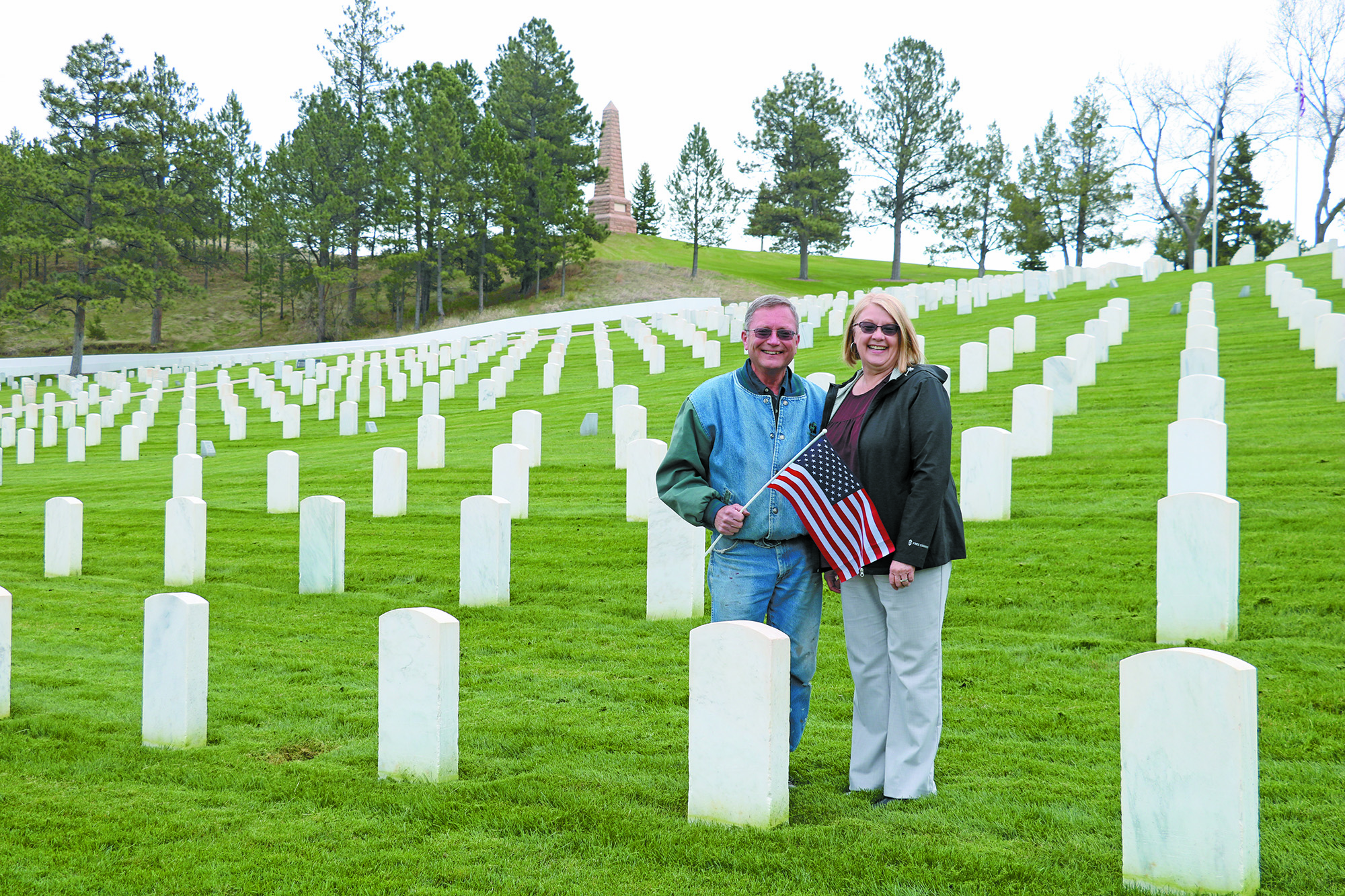 Gayle Tonsager, and her husband Ken, stand proudly amongst the near 1,400 gravesites at the Hot Springs National Cemetery. Volunteers are invited to participate in placing flags at the cemetery on Saturday, May 25, at 9 a.m. Participants should also bring a 12-inch ruler and a Phillips head screwdriver to help with the correct placement of the flags. Equally as important for the May 25 event, volunteers are also needed for the removal of the flags on Saturday, June 1 at 9 a.m. Children are especially encouraged to participate.

HOT SPRINGS – For many, Memorial Day is the unofficial start to summer. However, Memorial Day, originally know as Decoration Day, has it’s roots in the Civil War, and is a federal holiday for remembering and honoring persons who have died while serving in the United States Armed Forces.

In conjunction with the Memorial Day holiday, a special ceremony is taking place at the Hot Springs National Cemetery on Saturday, May 25, which according to one of the early organizers, is an experience that you will likely remember for a long time.

The event is the placing of U.S. Flags on each of the grave stones at the Hot Springs National Cemetery, located near the Hot Springs VA Medical Center, and there is a need this year for volunteers to help.

According to longtime VA employee Gayle Tonsager, for several years, the Hot Springs Employees Association, along with other VA employees, had the honor of placing individual flags on the nearly 1,400 graves at the Hot Springs National Cemetery.

“The first time that I placed flags I was overwhelmed by what an honor it was,” Tonsager said, while adding that she later took over organizing this for the Employee Association and also invited veterans who were in the programs in RRTP (Residential Rehab Treatment Program) to place flags.

“They expressed they also felt the honor that I did,” Tonsager said.

In 2017, the coordination of this event changed as it was taken over by the organization called Flags for Fallen, who now has permission to operate the annual Memorial Day Weekend flag placements at the Black Hills, Fort Meade and Hot Springs National Cemeteries.

According to the non-profit’s website, Flags for Fallen Vets’ mission was established on May 14, 2012, for the purpose of ensuring an American flag is placed upon every Veterans grave site at each National Cemetery in the Country, for Memorial Day. There are close to 800,000 interred American Veterans across the country that are not given this hallowed honor. Through private and corporate donations, volunteerism and the education of our next generation, Flags for Fallen Vets will work toward never allowing Americans to forget those who have served and sacrificed throughout our countries history, for the freedoms we enjoy today.

Tonsager said the organization’s founder Bob Fussner, who is from Texas, was in Hot Springs in 2017 to help get the local effort started. Medal of Honor recipient, Michael J Fitzmaurice was in attendance that year also.

As a volunteer organization, Flags for Fallen Vets is dependent on the community coming together to honor all of our veterans at the National Cemeteries.

Volunteers are invited to participate in placing flags at the Hot Springs National Cemetery on Saturday, May 25, at 9 a.m. to place flags on about 1,400 graves.

They do request that you bring a 12-inch ruler and a Phillips head screwdriver with you to help with the correct placement of the flags.

Volunteers are also needed for the removal of the flags on Saturday, June 1 at 9 am.

Tonsager said Flags for Fallen Vets encourages children to participate as well, as they will be the ones who will take over this honor in the future.

“We need to teach them how important our veterans are,” Tonsager said.

Based on information printed on a placard at the cemetery itself, the 8.65-acre Hot Springs National Cemetery opened shortly after the completion of the Battle Mountain Sanitarium hospital in the early 1900s. The first interment on May 5, 1907, was Civil War veteran Elijah F. Williams, formerly of the 1st New Jersey Infantry. In 1930, the home became part of the Veterans Administration and, in 1973, the cemetery was one of 21 cemeteries transferred to what was then known as the National Cemetery System. The cemetery was listed on the National Register of Historic Places in 1974.

A 32-foot tall monument was constructed on high ground in the southeast corner of the cemetery. The sandstone obelisk is built in three tiers with inscriptions on two faces.

One reads: “National Home to Disabled Volunteer Soldiers Battle Mountain Sanitarium 1914.” the other reads: “In Memory of the Men Who Offered Their Lives in the Defense of Their Country.”

The obelisk is similar to those erected at the Eastern (Togus, Maine) and Pacific (Los Angeles, Calif.0 National Homes, according to the placard.

The placard at the cemetery also states that by 1913, sanitarium protocol called for funerals to start at 8 a.m. Each included an honor guard. Able patients walked to the cemetery behind a caisson carrying the coffin. The service ended with a rifle salute and the playing of “Taps.”

Veterans and their dependents comprise all but two of the nearly 1,400 burials at the Hot Springs National Cemetery. The other graves – civilian employees who died on site in 1918 – are distinguished by headstones that face a different direction than those of veterans.

Hot Springs National Cemetery is closed to new interments. The only interments that are being accepted are subsequent interments for veterans or eligible family members in an existing gravesite. The last time a burial took place at the cemetery was in 2004.