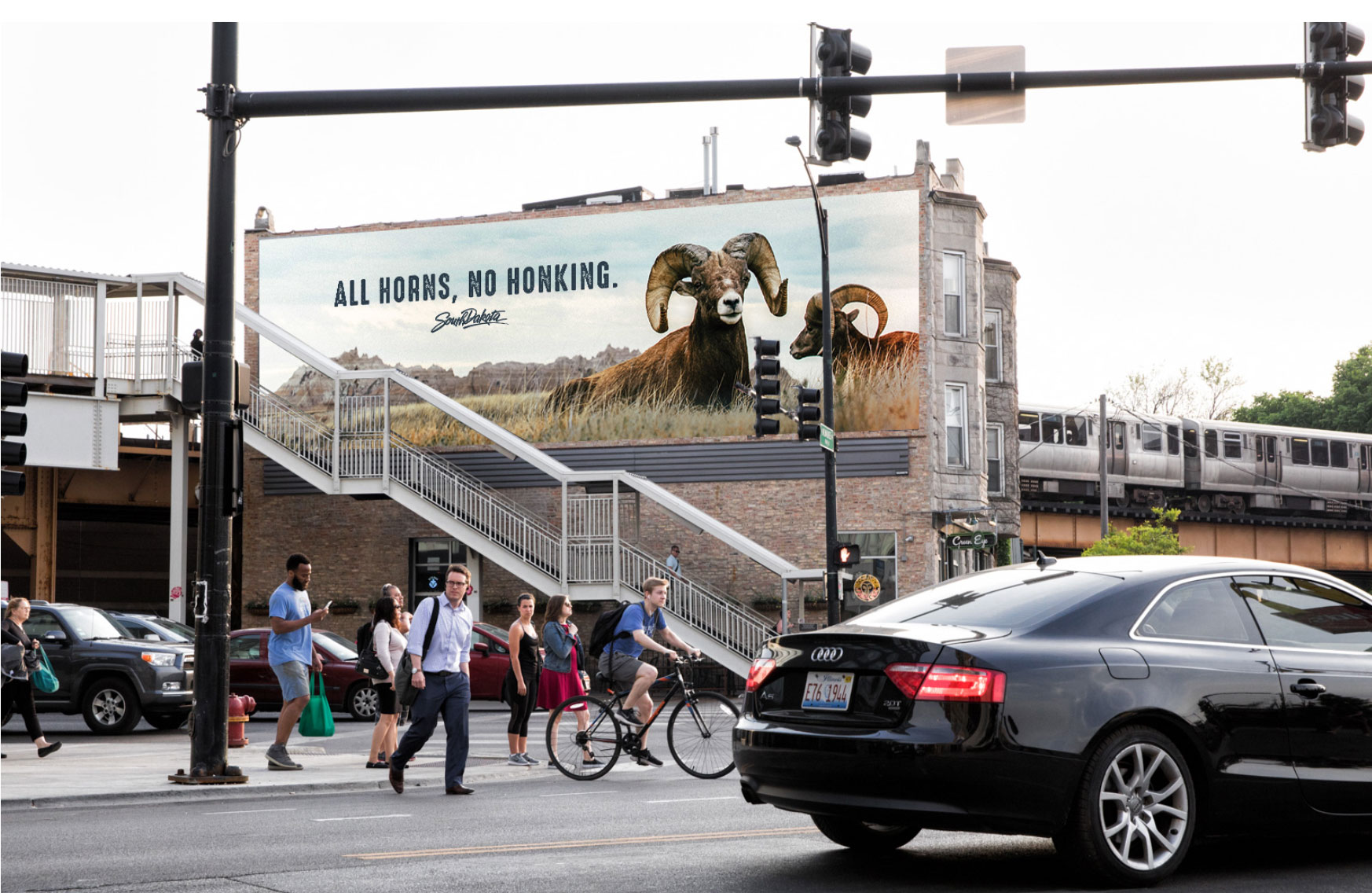 Above is a photo of a billboard that was placed by the South Dakota Department of Tourism in a busy urban area of Chicago, Ill., for a two month period in February and March 2019.

HOT SPRINGS – Several staff members of the South Dakota Department of Tourism in Pierre were in Hot Springs last Tuesday, April 16, for an Industry Outreach and Marketing Update meeting, where area tourism professionals were informed about the state’s past and present marketing campaigns and ongoing initiatives designed to maximize tourism’s impact on the South Dakota economy by increasing domestic and international travel to our state.

The visit to Hot Springs, led by Secretary of Tourism Jim Hagen, was one of seven sessions being held across the state duing the month, also including ones in Deadwood, Rapid City, Aberdeen, Sioux Falls, Mitchell and Pierre.

Hagen explained to the group of more than 30 people that South Dakota welcomed 14.1 million visitors to the state in 2018, which generated $3.98 billion in visitor spending and was a 2.5 percent increase over 2017.

During a Q&A held at the end of the two-hour presentation, Hagen said the forecast for the upcoming 2019 tourism season is showing a 1.8 percent increase in leisure travel and a 2.0 percent increase in business travel. He however added that his personal feeling is that it will be even greater than that, based on the fact that they have seen higher than expected engagement in some of his departments early marketing efforts so far this year.

He also responded to a question regarding Gov. Kristi Noem’s comments that she would like to see Hot Springs developed and promoted as a national destination for veteran tourism. Hagen said, that while he has not seen the governor’s specific plans for Hot Springs, he is excited for the opportunity to work with her and the community to make that a reality.

Accompanying Hagen to Hot Springs last week were representatives from all of the various departments within the overall Department of Tourism, including: Industry Outreach, Development and Research; Global Marketing and Brand Strategy; Global Media & Public Relations; and, Global Travel and Trade.

Kirk Hulstein represented Industry Outreach, Development and Research, which is the team that proactively travels the state to provide industry members with information about cooperative programs, marketing campaigns, consumer trends, marketing research and the latest updates from the Dept. of Tourism.

One of the areas Hulstein’s team has been helping communities around the state develop is niche tourism efforts, including agri-tourism, sports tourism, outdoor tourism and tribal tourism. He described how several communities along Hwy. 14 have created a concept known as the “Rural Road Trip” for agri-tourism and that a group of visitors from Texas are planning to come up this summer to check it out.

Hulstein also described how his department uses advances in technology, specifically through a company called Arrivalist, that allows the real-time tracking of visitors to the state who come here after being served an electronic advertisement. The technology, he said, drops a “tracking pixel” onto consumers electronic device, which in turn allows the software to follow them throughout their time in South Dakota.

Mike Gussiaas spoke to the group about Global Marketing and Brand Strategy, which is responsible for working with the department’s marketing agencies to develop, execute and manage the year-round domestic and international marketing campaigns in key strategic markets.

He showed off the department’s 2019 strategy, which included a revamped version of the department’s popular “Great Faces, Great Places” campaign that has been targeted to the three different population segments known as Families, Searchers and Wanderers. He also spoke of some recent successes in promoting South Dakota as a tourist destination to residents living in the Chicago area.

Gussiaas said that Hot Springs was one of 12 different “Peak Partners” in the state that the Department of Tourism is working closely with to help develop marketing campaigns for, through the financial investment made possible by Hot Springs BID Board, which generates additional tax income from motel stays.

Other speakers at the meeting last week included Cole Irwin who is the Global Travel & Trade Director, and Stephanie Palmer who is the Social Media Manager and Content Strategist.

Palmer works in the Global Media and Public Relations Department which actively pitches South Dakota tourism-related stories to state, regional, national and international media in order to secure coverage in major print and online publications and broadcast outlets. Throughout the year, the Global Media and Public Relations team hosts numerous travel writers and journalists as well as social media influencers to put a spotlight on the state and its tourism offerings. The team also conducts media interviews, provides photo and video assets to media outlets, and issues press releases from the department.